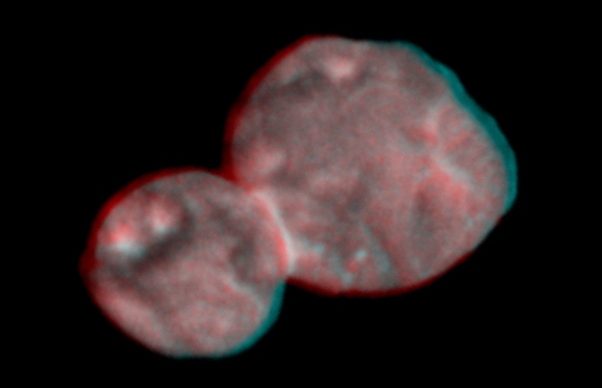 Stern reported that the spacecraft, which conducted its last observations of Ultima Thule on Thursday, has already traveled three million miles beyond its second target into the Kuiper Belt. Transitioning out of flyby mode, the probe is now conducting distant observations of various KBOs and studying its Kuiper Belt environment.

Analysis of the flyby data returned so far has revealed no evidence for ring particles or moons one mile in diameter or larger orbiting Ultima Thule, Showalter said. Mission scientists are continuing the search because the presence of one or more satellites during the time of Ultima’s formation would play a crucial role in Ultima’s formation by having slowed the rotation of the two lobes that eventually came together to form the KBO. Their search will not be completed until additional images are downloaded from the spacecraft.

The presence of a moon would also help scientists determine Ultima Thule’s mass and density, allowing them to identify the composition of its interior.

No evidence has been found to indicate the KBO has an atmosphere. Mission scientists do not expect to see a slowdown of the solar wind, the stream of charged particles coming from the Sun, at Ultima Thule. An atmosphere would cause such a slowdown.

“We do not expect to be seeing any atmosphere coming off of the solar wind to detect dust,” Young said, reporting on observations of the spacecraft’s ultraviolet ALICE instrument and Student Dust Counter (SDC). “We looked back at Ultima Thule with our imagers, with MVIC and LORRI. Those are not going to come back for a few weeks, but when they do, we will look to see if we see dust in-trained on a coma the way you would see dust in an outburst from a comet.”

Ultima Thule’s two lobes are nearly the same reddish color, making them typical of most objects in the region, known as the cold classical Kuiper Belt. KBOs in this area have nearly circular, low-inclination orbits because they were never perturbed by the solar system’s gas giant planets, Protopapa said.

“Cold classical Kuiper Belt Objects are relatively redder than the rest of the population [of KBOs],” Protopapa said.

Ultima’s color indicates it is a good representative of this class of objects, meaning details scientists learn regarding its composition will yield greater understanding of this entire population of objects. 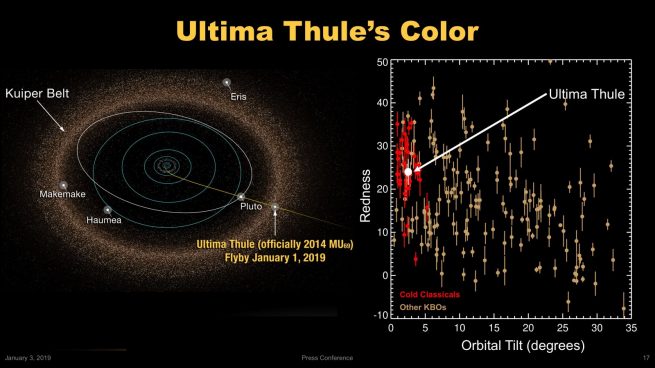 The fact that both lobes of Ultima are nearly identical in color supports scientists’ hypothesis that the KBO is the result of a merger of two objects that accreted in the region.

A “movie” created from the stereo image shows Ultima Thule’s rotation and reveals some of its topography, Schenk said. Brighter materials seems to be concentrated in lower regions or troughs, indicating surface material may be moving downward from higher terrain such as ridges.

A large impact crater appears to be visible on the far side of the upper lobe as a dark spot.

“We do need to be careful about interpreting images like this because these are basically equivalent to full Moon images that we see from Earth, where shadows and textures are washed out, and we see the albedo variations. Some of these markings could be ridges, but we won’t know for sure until the subsequent images are downloaded.”

Stern also acknowledged three artists who served as science team collaborators, creating art to represent the mission and its findings.

“We use art to help illuminate the science,” Stern said. “I want to highlight the work of three members of our science team, who are actually doing just that this week to help us explore what all this data means.”

He recognized James Tuttle Kean of Caltech, Leila Gabasova of the University of Rhone-Alpes in France, and Mallory Kinczyk of North Carolina State University.

Kean created hand sketches of Ultima Thule, imagining the types of processes occurring on its surface based on the actual data that has been returned. Gabasova sketched individual members of the New Horizons team alongside drawings that show the specific areas on which they are working. Kinczyk made a three-dimensional clay model of Ultima featured at both Wednesday’s and Thursday’s press conferences.

It would be nice it you could provide a stereo pair that can be free-viewed. Much easier than carrying a pair of red/blue glasses around with you.