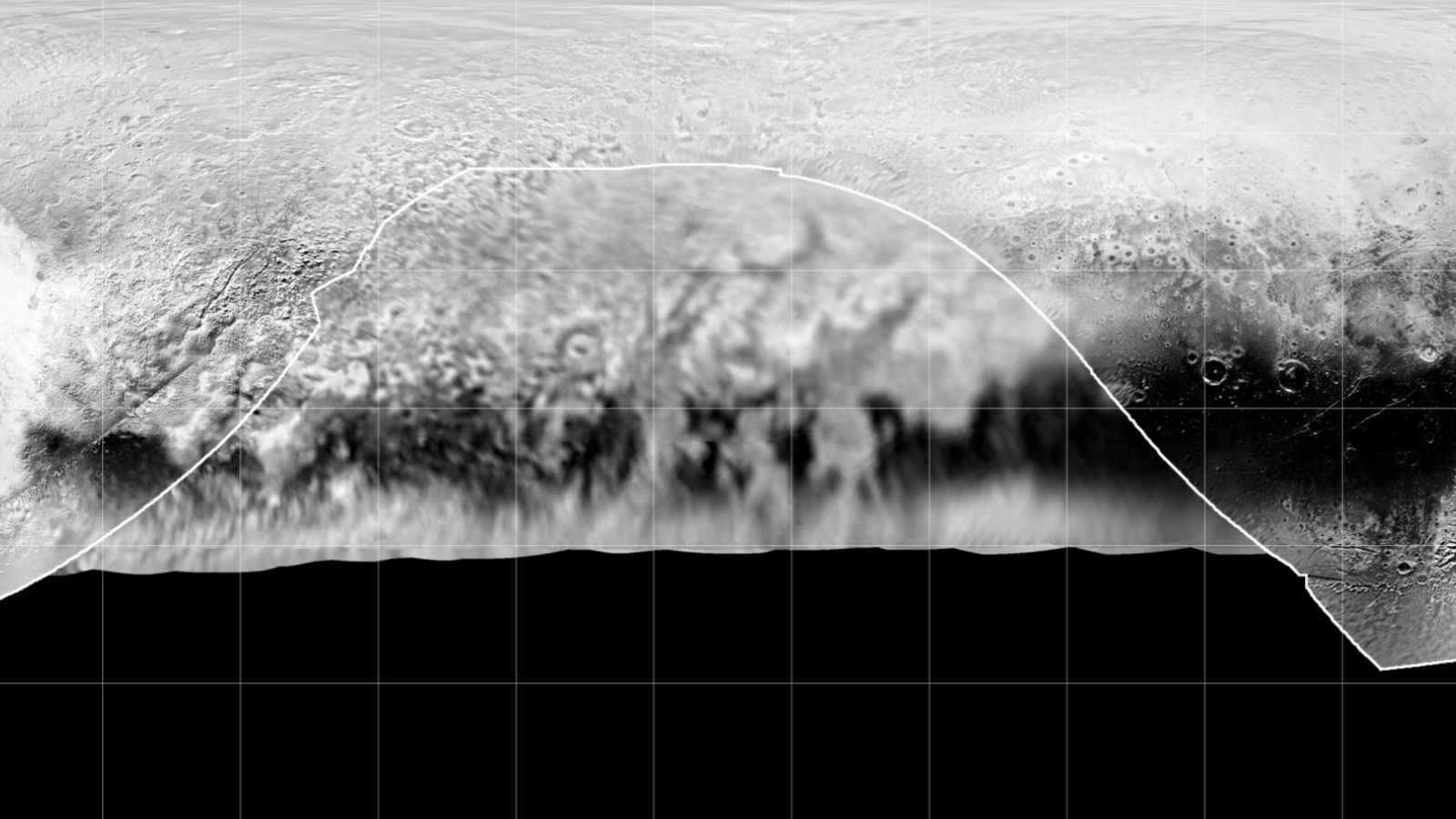 Pluto’s far side is visible in the area below the white line. The dark areas are regions that could not be imaged. Image Credit: NASA/New Horizons/S. A. Stern et al., 2019

More than four years after New Horizons‘ historic July 2015 Pluto flyby, mission scientists have released detailed images of Pluto’s far side, which the spacecraft was able to image only in low resolution on approach and following departure.

Pluto takes a total of 6.4 Earth days to complete a single rotation. Because New Horizons sped by Pluto at 31,000 miles (50,700 km) per hour, its instruments could capture only one side of the planet, the one facing away from Pluto’s large moon Charon and known as the encounter or near side, in high resolution.

However, beginning at approximately 3.7 million miles (six million km) from the dwarf planet in the days just before closest approach, the spacecraft’s Long Range Reconnaissance Imager (LORRI) and Multispectral Visible Imaging Camera (MVIC) successfully took low-resolution images of Pluto’s anti-encounter or far side. These images range from several kilometers per pixel to tens of kilometers per pixel.

Principal investigator Alan Stern of the Southwest Research Institute in Boulder, Colorado (SwRI), first author of a paper on the findings that will be submitted for publication in the journal Icarus, said the scientists used the best of the low-resolution photos to create a mosaic of Pluto’s mysterious far side, which also has a variety of terrains, yet is markedly different from the near or encounter side.

Such differences in a world’s two opposing hemispheres are seen on Earth’s Moon, where basaltic plains produced by ancient volcanoes are seen on the near side but not on the far side.

The steep bladed terrain seen on the near side, which rises as high as 1,000 feet (300 meters), is also abundant on the far side. To date, this terrain has not been found anywhere else in the solar system.

Also present is a 155-mile- (250-km-) wide crater known as Simonelli Crater. As large as craters on the near side, Simonelli is highly reflective, leading scientists to suspect its floor is covered with ice. Variations in regions’ brightness are indicators of differences in surface geology, noted Oliver White, planetary scientist at the SETI Institute and co-author of the study.

Image processing also revealed scattered pools of nitrogen ice, carbon monoxide, and methane, much like those found on the encounter side.

While Pluto’s far side contains nothing comparable to Sputnik Planitia, a basin on the near side that makes up the left part of Pluto’s iconic heart feature, the images show a dark region directly opposite the basin covered in intersecting lines and patches. Mission scientists suspect these were produced by shockwaves from the impact that created Sputnik Planitia.

Similar features have been seen on the planet Mercury, on the side directly opposite the large Caloris Basin, which was also produced by an impacting object.

A dark band appears to wrap around most of the dwarf planet except for Sputnik Planitia. It is likely composed of haze particles that fell onto the surface, which are prevented from freezing into ice by heat from the Sun.

Images of Pluto’s layered hazes, taken on the spacecraft’s departure, enable scientists to view its limb in profile. This has helped scientists distinguish areas of rugged and smooth terrain on Pluto’s far side, according to Paul Schenk of the Lunar and Planetary Institute (LPI), also a study co-author.

While the new mosaic is of higher quality than any previous images of Pluto’s far side, it is nowhere near as clear as New Horizons‘ near-side images, leaving scientists with many questions about what is occurring on this “other” side, which faces Charon.

The paper is dedicated to future exploration of Pluto and advocates returning with an orbiter, which would study the far side in greater detail. Fueled by scientists’ interest, the Southwest Research Institute has just completed a $500,000 study on a possible NASA orbiter mission, Stern said.

This map shows the varying brightness of Pluto’s surface, with blue representing the darkest areas and red the brightest ones. Image Credit: NASA/New Horizons/S. A. Stern et al., 2019

The colorful mapping of Pluto and Charon are better to investigated in NASA studies in a fact.