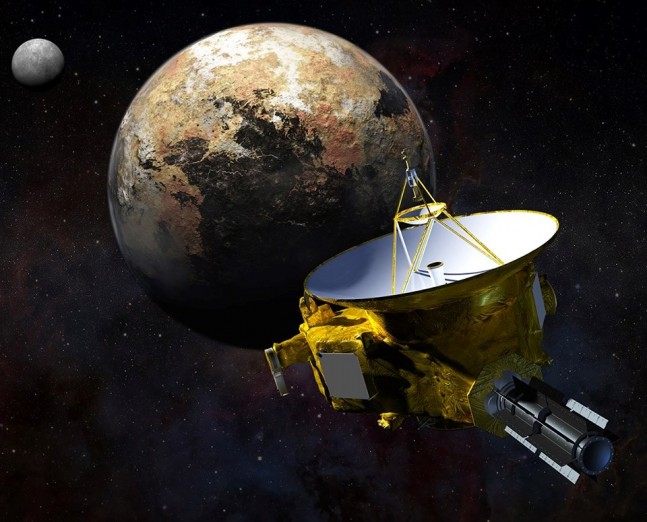 NASA’s New Horizons spacecraft began the first of several phases of its historic rendezvous with Pluto on Thursday, Jan. 15, exactly six months before its closest approach to the small planet. This early phase, after nine years and three billion miles of travel across the solar system, marks the beginning of optical navigation, when the spacecraft will, for the first time, take images of Pluto that will be used to navigate the flyby.

New Horizons was launched on Jan. 19, 2006 as the fastest spacecraft to leave our planet, to a destination 4.67 billion miles away. The following animation video shows the spacecraft’s trajectory as it left Earth, flew by Jupiter 13 months after launch for a gravity assist, and heads toward Pluto.

As the mission progresses, scientists will refine their knowledge of Pluto’s exact position, so mission controllers can make any necessary course corrections required for precise timing of the July 14 encounter. The piano-sized probe is currently 32.39 Astronomical Units or AU (one AU equals the Earth-Sun distance, or 93 million miles) from Earth and 1.41 AU or  135 million miles from Pluto, traveling 27,000 miles per hour.

Long-distance observations of the Pluto system will begin on Jan. 25 via the spacecraft’s Long Range Reconnaissance Imager (LORRI), a long focal length telescopic instrument designed to obtain high-resolution photographs in visible wavelengths. Between now and early spring, LORRI will take hundreds of photographs of Pluto and its five moons, enabling mission scientists to obtain precise measurements of Pluto’s orbital position and the current distance between the probe and Pluto.

Mark Holdridge, New Horizons encounter mission manager at Johns Hopkins University Applied Physics Lab (JHUAPL) stressed the importance of knowing precisely where Pluto will be at the time of the flyby. Illustration of the solar system including the Kuiper Belt, Oort Cloud and Heliopause. Image Credit: NASA

“The flyby timing has to be exact, because the computer commands that will orient the spacecraft and point the science instruments are based on precisely knowing the time we pass Pluto–which  these images will help us determine,” he said.

Not only does New Horizons need to fly by Pluto in the best possible position for gathering data; it also has to steer clear of any debris that could destroy the swiftly flying spacecraft in an impact. This includes dust particles from any as yet undiscovered ring system or tiny moons. If deemed necessary, a course correction maneuver of the spacecraft might be carried out as soon as March. New Horizons will actually fly inside the orbits of Pluto’s moons during closest approach.

In addition to assisting with navigation and providing crucial information determining whether any course corrections are needed, LORRI will also conduct detailed observations of the dynamics between Pluto and its moons during this period.

Principal Investigator Alan Stern compares this first reconnaissance of an unknown world to the historic Voyager missions of the 1970s and 1980s, which gave humanity its first ever look at the solar system’s four gas giants.

“We’ve completed the longest journey any spacecraft has flown from Earth to reach its primary target, and we are ready to begin exploring,” Stern said.

LORRI’s early images will show Pluto and its moons only as bright dots. More detailed images will not come until the spring. By May, New Horizons’ cameras and spectrometers will be close enough to provide images of higher resolution than the most powerful Earth-based telescopes and even the Hubble Space Telescope.

At closest approach, the spacecraft will come within 7,700 miles of Pluto. Its instruments will take photographs of the planet’s surface and atmosphere at much higher resolution than those the Voyagers took of the giant planets. The best images of Pluto we have now are blurry and low resolution. Comparable images of Earth would not even reveal its continents. In just six months, these will be replaced by detailed, high-resolution pictures that will reveal surface features such as mountains and craters. A spacecraft imaging Earth from this distance with these instruments would yield detailed photos of New York City, clearly showing the Hudson and East Rivers and even ponds in Central Park.

“What I am most excited about is taking this point of light and transforming it into a planet,” Stern emphasized.

New Horizons will be doing a great deal of science during this first approach phase, measuring high energy charged particles in the solar wind, collecting data on the environment of the Pluto system, and calculating the concentration of dust particles in the region. The results of these studies will provide data not just on Pluto’s environment, but also on the environment of the solar system’s third and most unexplored area, the Kuiper Belt, which may contain many as yet undiscovered small planets composed of rock and ice.

Studying this region filled with primordial material from the solar system’s earliest days will yield important clues to how the system formed. Software that will assist analysis of New Horizons’ data is being provided by the US Geological Survey’s Astrogeology Science Center in Arizona.

Will Grundy, a mission co-investigator and astronomer at Lowell Observatory in Flagstaff, Arizona, where Pluto was discovered in 1930, is working with Northern Arizona University professors Stephen Tegler, Randy Dillingham, and David Trilling growing methane-nitrogen ice in conditions simulating those on Pluto’s surface. Because Pluto’s surface is known to contain methane and nitrogen ice, Grundy plans to use the simulation to interpret New Horizons’ data in situ.

Jim Green, director of NASA’s Planetary Science Division, praised the New Horizons team for its “flawless” work in getting the spacecraft to this point.

Stern discusses the mission and its start of operations in an interview last week on “All Space Considered” with Dr. Laura Danly, curator of the Griffith Observatory in Los Angeles, California.

Great article. I learned some things I didn’t know and I have been following the mission closely. I am very excited and hope all goes well. It sounds like a very precise little puppy to pull off! Great job keeping us informed, Ms. Kornfeld!

Why isn’t New Horizon going into orbit around Pluto? It seems odd to fly that far for just a short period of up-close study.

In fact, New Horizon is not entirely dedicated to Pluto and its neighbours, hence the fact that the probe will not orbit the dwarf planet. While Pluto is the primary objective, the New Horizon will continue its journey in order to meet another large Tran-Neptunian Object in the Kuiper Belt. At this time, we still don’t know which one, even if Hubble did one or two studies to find good candidates to match the New Horizon’s team expectations.

The fact is, Pluto is the most documented TNO object and the mission will focus equally on another(s) further celestial body, one that we know pretty much nothing about.

I might also recommend to everyone the awesome pictures the New Horizons took of the jovian moon Io and Jupiter itself. These are absolutely stunning in my opinion.

The Tsiolkovsky rocket equation (https://en.wikipedia.org/wiki/Tsiolkovsky_rocket_equation) means that fuel requirements increase exponentially with payload mass – payload in this case including any fuel you keep for manoeuvring into orbit at the destination. Similarly, cost, mission complexity and failure probability all increase rapidly with manoeuvring capability (“delta-v”). Imagine having to *guarantee* all that fuel could be stored safe after a decade or more in a hard vacuum/heat stress/hard radiation environment, that the engine could fire reliably and controllably and that the science payload could survive the sudden jolt of the engine firing after that time as well. (And this would be the easy part!) Not impossible – but much harder than what NASA has done.

Short answer: if you are or know an eccentric billionaire willing to gamble then get in touch with the space jocks. I’m sure they’d all love to do some more daring missions. Plant a flag on Pluto!

Doug, it would take a massive amount of fuel to put on the brakes; more than New Horizons can carry. I wish we could orbit Pluto too! Been waiting for this my entire life!