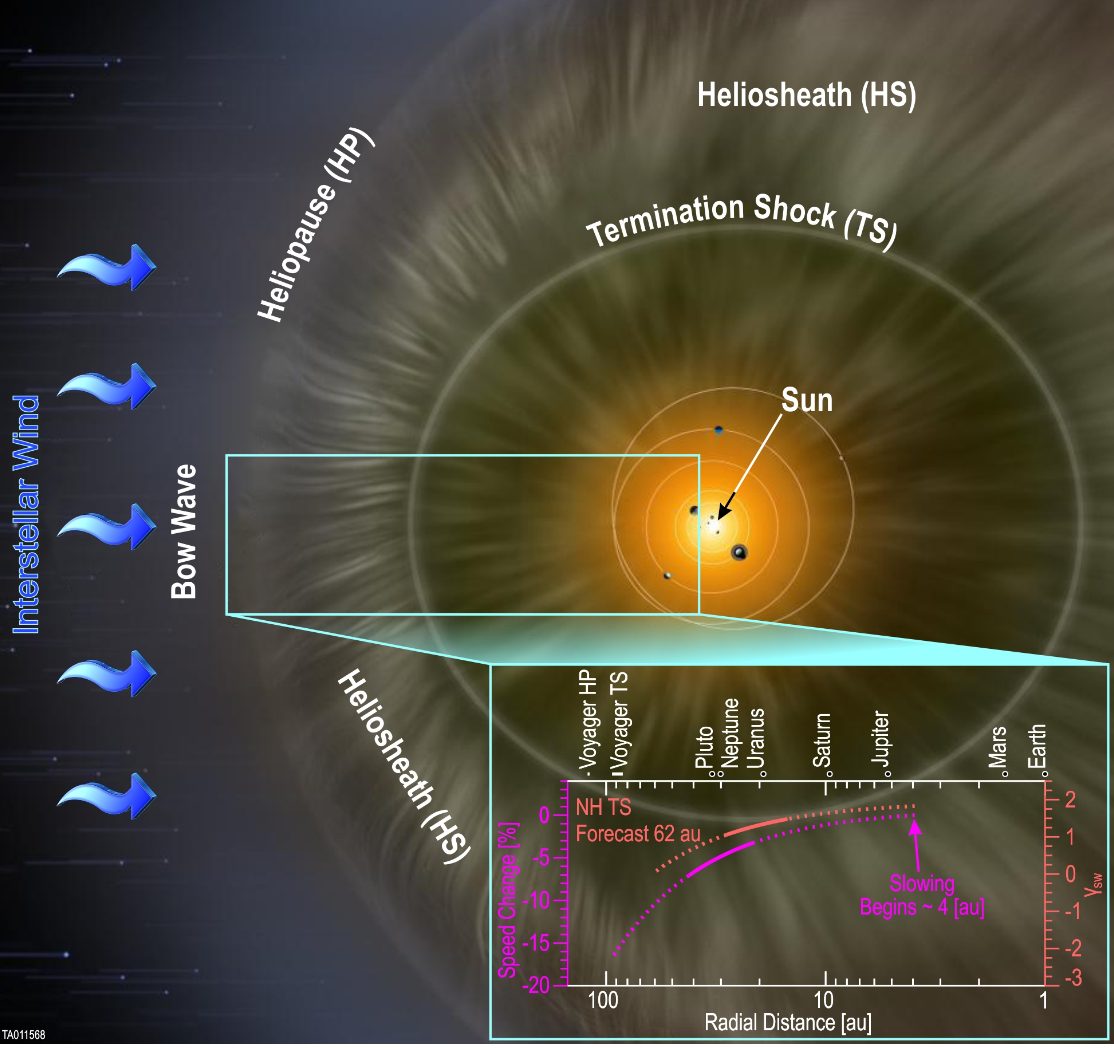 This image shows the slowing of the solar wind beginning at four AU radial distance from the Sun and continuing into the outer solar system. Image Credit: Southwest Research Institute; background artist rendering by NASA and Adler Planetarium

NASA’s New Horizons‘ Solar Wind at Pluto (SWAP) instrument detected a slowing of the solar wind, the stream of charged particles flowing outward from the Sun, while traveling through the outer solar system.

The spacecraft is currently almost 47 AU (astronomical units, with one AU equal to the average Earth-Sun distance) from the Earth and on track to become the fifth probe to leave the solar system, after Pioneers 10 and 11 and Voyagers 1 and 2.

Traveling at supersonic speeds, the solar wind encompasses the heliosphere, a section of space that includes not just the planets but also the outer region of the solar system beyond them. In the outer heliosphere, it interacts with neutral materials from interstellar space and ionizes them, causing them to acquire positive or negative charges.

SWAP was put on the spacecraft to measure the strength of the solar wind at Pluto and beyond. It measures and collects data on the solar wind and the ions, known as “interstellar pickup ions,” studying their flux in unprecedented detail.

The Pioneers and Voyagers were not equipped with the modern instruments needed to study the solar wind, noted Heather Elliott of the Southwest Research Institute (SwRI) and SWAP deputy principal investigator.

“Our Sun’s influence on the space environment extends well beyond the outer planets, and SWAP is showing us new aspects of how that environment changes with distance,” she stated.

SWAP‘s findings confirmed scientists’ suspicion that the solar wind slows down as it collects and ionizes interstellar material.

Beginning at a radial distance of four AU from the Sun, SWAP started to measure a slowing of the solar wind. Between 21 and 42 AU, SWAP detected further slowing as the solar wind started picking up interstellar particles.  In the region between 33 and 42 AU, the instrument found the solar wind traveling six to seven percent more slowly than at Earth’s location, one AU.

Changes SWAP detected in the temperature and density of the solar wind will help scientists determine when the spacecraft leaves the solar system and crosses into interstellar space, which Voyager 1 did in 2004 and Voyager 2 in 2007.

However, the termination shock is not static and can move inward or outward depending on changing levels of solar activity. When the Voyagers crossed this boundary, Voyager 1 at 94 AU and Voyager 2 at 84 AU, the Sun was significantly more active than it is now. Lower levels of solar activity, along with weaker solar wind pressure, have likely moved this boundary closer to the Sun.

New Horizons is not expected to cross the termination shock until at least the mid-2020s. If solar activity picks up between now and then, the boundary will likely be pushed outward to where it was during the Voyagers‘ crossings, delaying New Horizons meeting that milestone.

“New Horizons has significantly advanced our knowledge of distant planetary objects, and it’s only fitting that it is now revealing new knowledge about our own Sun and its heliosphere,” said mission principal investigator Alan Stern, also of SwRI.

A paper detailing the SWAP findings was published last month in The Astrophysical Journal.