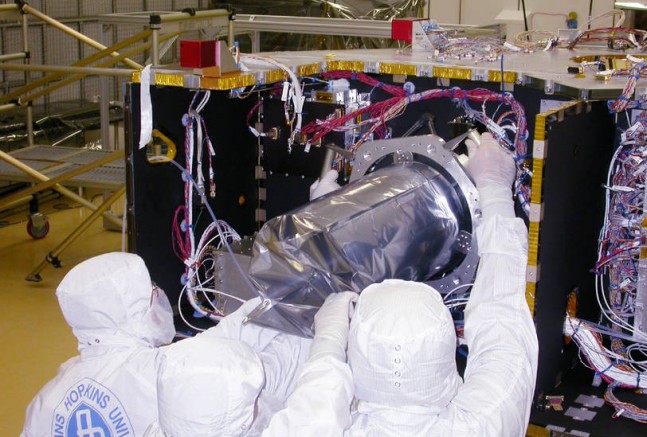 The latest images taken by NASA’s New Horizons‘ Long Range Reconnaissance Orbiter (LORRI) instrument show intriguing dark and light patches on the surface of Pluto, including a bright region that could be a polar cap. These latest round of pictures come at a time when the spacecraft is fast approaching its flyby of the far-flung and frozen world.

Two movies were made out of the images, which were magnified three times—one showing Pluto and its large moon Charon rotating around their center of mass, known as a barycenter, as the system completed one full rotation, and the other keeping the center of Pluto fixed in the frame.

At an April 29 media teleconference, the newest images and movies created from them were presented and discussed by John Grunsfeld, the associate administrator for the Science Mission Directorate at NASA Headquarters in Washington; Alan Stern, the New Horizons principal investigator at the Southwest Research Institute in Boulder, Colorado; and Hal Weaver, New Horizons project scientist on the LORRI telescopic camera instrument team at Johns Hopkins Applied Physics Laboratory, Laurel, Maryland.

“As we approach the Pluto system, we are starting to see intriguing features such as a bright region near Pluto’s visible pole, starting the great scientific adventure to understand this enigmatic celestial object,” Grunsfeld said.

The alternating light and dark features on Pluto’s surface match those seen on the best Hubble images of the planet.

Because Pluto orbits on its side, like Uranus, the images directly show one of its poles, which is noticeably brighter than the planet’s other regions, suggesting the presence of polar caps.

Scientists speculate the caps are regions of highly reflective snow made up of frozen molecular nitrogen ice on the surface, but they will not be certain until the July flyby. Charon, which also appears in the images, is a grayish color and does not appear to have the same alternating bright and dark regions.

None of the system’s small moons show up in these images because the short exposure times over which they were taken—only one-tenth of a second—are not long enough to photograph such faint objects.

Stern connected the release of the images with recent celebrations of the Hubble Space Telescope’s 25th anniversary, noting that for the first time, images showing more surface detail than the best photos taken by Hubble are being sent back to Earth.

A technique called “image deconvolution”, first pioneered to resolve blurry images taken by Hubble’s flawed mirror in its early days, was used to tease out additional details in the recent New Horizons images.

The process of image deconvolution, done digitally, reverses optical distortions in photographs taken by devices such as telescopes, creating clearer and sharper images. Stern emphasized that because the images are at low resolutions, it is surprising that scientists can see so much surface detail.

“If you had similar images of Mercury, or images of even Mars, you would not see the same kinds of big surface units going by as you do here on Pluto. That’s very promising.”

Weaver explained that photographs of Pluto taken by Hubble and by Earth-based telescopes are more light sensitive, in contrast to those taken by LORRI, which show more detail. By June, when LORRI has exceeded Hubble’s light sensitivity, it will likely find any tiny, as-yet-undiscovered moons the system may have.

He provided some detail about LORRI, noting it has a telescopic camera with a fixed focus that never needs adjustment. It can function in a wide range of temperatures, ranging from room temperature to -180 °F (-118 °C).

Stern said that more data is needed before the existence of polar caps on Pluto can be confirmed. That data will come over the next 11 weeks between now and the flyby, through color and high resolution images taken by the Ralph instrument and through spectroscopic data provided by the imaging spectrometers of both Ralph and Alice.

“These incredible images are the first in which we can begin to see detail on Pluto, and they are already showing us that Pluto has a complex surface,” Stern emphasized. The scientists outlined New Horizons‘ observing plans for the next two months.

At that rate, it will collect more data than during the April imaging, in which four images per visit were taken.

Imaging will be halted between May 15 and 27 to allow downlinking of all the data collected, which will then be made into another movie.

Daily observations of Pluto will begin on May 28, with images getting better as the spacecraft approaches the planet.

During a question and answer period in which questions were taken from correspondents on their phones, Stern noted that Pluto’s atmosphere has grown 200 to 300 percent over the last ten years, even as it recedes from the Sun after its 1989 perihelion.

He also speculated about the composition of Pluto’s surface. Spectroscopy taken from Earth shows the presence of molecular nitrogen, carbon monoxide, and methane, which could be responsible for the dark and light patches on the surface.

Charon’s surface, in contrast to Pluto’s, is made up mostly of water and ammonia hydrates, and does not have the brightness variations visible on its parent planet.

Now 98 percent of the way to Pluto, New Horizons is fulfilling NASA’s mission “to explore, discover, and inspire,” Grunsfeld said.

Images shown during the teleconference can be viewed at http://www.nasa.gov/pluto042915.

Raw, unprocessed images taken by LORRI will be uploaded to http://pluto.jhuapl.edu/soc/Pluto-Encounter/ within 48 hours of being sent back to Earth for public viewing.