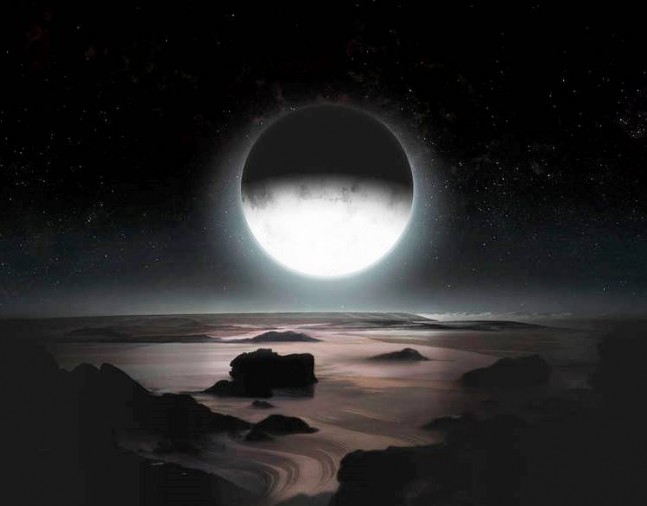 The “rain of data” promised by New Horizons principal investigator Alan Stern began streaming in on Wednesday, July 15, the day after the spacecraft’s closest approach to the dwarf planet Pluto. In just a few days time, it has tantalized the world with stunning images of Pluto and its moon Charon, showing features that have repeatedly baffled scientists.

Preliminary images reveal both Pluto and Charon to be geologically active worlds with far fewer craters than expected.

Members of the mission team have assigned informal names to features on both worlds. Pluto’s bright heart-shaped region has been dubbed “Tombaugh Regio” after discoverer Clyde Tombaugh.

Images taken by the Long Range Reconnaissance Imager (LORRI) from a distance of 48,000 miles (77,000 km) show features as small as one-half of a mile (one km) on Pluto’s surface. In the center left of Pluto’s vast heart-shaped feature – informally named “Tombaugh Regio” – lies a vast, craterless plain that appears to be no more than 100 million years old, and is possibly still being shaped by geologic processes. This frozen region is north of Pluto’s icy mountains and has been informally named Sputnik Planum (Sputnik Plain), after Earth’s first artificial satellite. The surface appears to be divided into irregularly-shaped segments that are ringed by narrow troughs. Features that appear to be groups of mounds and fields of small pits are also visible. This image was acquired by the Long Range Reconnaissance Imager (LORRI) on July 14 from a distance of 48,000 miles (77,000 kilometers). Features as small as one-half mile (1 kilometer) across are visible. The blocky appearance of some features is due to compression of the image. (Click for larger annotated version.) Image & Caption Credit: NASA/JHU-APL/SwRI

Close-ups taken of a region near Pluto’s equator at the southern boundary of the heart feature show a mountain range with peaks as high as 11,000 feet (3,500 meters). The mountains are estimated to be approximately 100 million years old, young on geologic time scales.

Mission scientists believe they are formed by water ice, which behaves like rock at Pluto’s cold temperatures.

“The bedrock that makes those mountains must be H2O, water ice,” Stern said. “We see water ice on Pluto for the first time. We can be very sure that the water is there in great abundance.”

In addition to water ice, nitrogen and methane ice cover Pluto’s surface, but neither of those is strong enough to create such high mountains, Stern explained.

Spectroscopic data shows evidence of nitrogen, methane, and carbon monoxide ice on Pluto’s surface but has yet to reveal the presence of water ice.

Scientists are uncertain as to what drives geological activity on Pluto and Charon. Tidal forces from giant planets cause such activity on some of these planets’ moons, but there is no giant planet near the Pluto system to generate such effects.

One possible explanation for geological activity on both worlds is heat produced by radioactive decay of elements in these worlds’ rocky interiors. Pluto’s interior could harbor potassium, thorium, and uranium, all of which produce heat via radioactive decay. This new image of an area on Pluto’s largest moon Charon has a captivating feature—a depression with a peak in the middle, shown here in the upper left corner of the inset. (Click to enlarge.) Image & Caption Credit: NASA / JHUAPL / SWRI

That heat could be sustained by methanol and ammonia, which act like anti-freeze. If the interior of either world gets warm enough, an underground ocean of liquid water could exist.

Most of the data from the flyby is still on the spacecraft. Until that data is sent back and analyzed, researchers will not be able to confirm or deny the possibility of subsurface oceans on either world.

In the center-left of Tombaugh Regio is a planar region with no craters and a young surface less than 100 million years old. This area, located north of the mountain range, has been informally named Sputnik Planum after the first artificial satellite launched into space.

The plain appears to be composed of polygonal segments approximately 12 miles (20 km) wide separated by shallow troughs made of a darker material. Some of the troughs have groups of hills that rise above the plain.

Other parts of the plain show small pits, which some scientists believe were formed by ice that sublimated, transforming directly from solid to gas.

“This terrain is not easy to explain,” noted Jeff Moore, leader of the mission’s Geology, Geophysics, and Imaging (GGI) team. “The discovery of vast, craterless, very young plains on Pluto exceeds all pre-flyby expectations.”

Two different theories are being considered to explain these features. The first attributes the irregular polygonal shapes to the contracting of surface materials, much the way mud on Earth dries.

The second theory posits formation by convection, similar to wax rising in a lava lamp. A warm interior could drive such convection on a surface composed of carbon monoxide, methane, and nitrogen ices.

Along the plain, there are also dark streaks several miles long all aligned in the same direction. That indicates they could have been created by winds blowing across the dwarf planet.

As expected, methane ice is abundant on Pluto’s surface; however, the levels of methane vary significantly from one region of the dwarf planet to another.

Preliminary data, released on July 17, on Pluto’s atmosphere shows that it extends as much as 1,000 miles (1,600 km) from the surface.

A region of cold, dense ionized gas was discovered tens of thousands of miles beyond Pluto, confirming the dwarf planet’s atmosphere is being lost to the solar wind.

“This is just a first, tantalizing look at Pluto’s plasma environment,” said Fran Bagenal of the University of Colorado at Boulder and mission co-investigator.

Located on the large moon’s upper right side is a large canyon four to six miles (seven to nine km) deep.

In the north, the dark “anti-polar cap” is diffuse, showing various levels of darkness. The region is believed to be composed of a thin layer of dark material, possibly coming off the surface of Pluto.

Like its parent planet, Charon has surprised scientists with its lack of craters and young surface.

Images released on Thursday, July 16, zoom in on a rectangular area near Charon’s equator, where a mountain appears to rise out of a trough. The strange feature, about 240  miles (390 km) long, is completely baffling scientists. It has been nicknamed the “mountain in a moat”.

“This is a feature that has geologists stunned and stumped,” Moore said.

Charon’s surface is marked with cracks similar to those on Earth’s moon and on Mercury. On the latter worlds, the cracks were produced by lava tubes, but this is not likely for Charon.

LORRI snapped a photo of irregularly-shaped Hydra, now known to measure 27 by 20 miles across. The small moon shows varying levels of brightness.

Higher resolution, non-compressed images showing more detail will be returned over the next weeks and months. Stern noted more than 50 gigabits of data were collected during the encounter, of which less than one gigabit has been sent back.

The next media briefing, where new data will be released, is scheduled for Friday, July 24; the time for the event is yet to be determined.

These first results from Pluto have been well worth the wait! And this is only the beginning of the data to be downloaded from New Horizons. But as we wait for more results of New Horizons’ close encounter with Pluto to be sent back to Earth, it may seem odd that now is a good time to start thinking about a follow on mission to this distant world. Considering how long it took to get New Horizons off the ground and to Pluto, it might be a quarter century before we revisit Pluto and answer the questions raised by New Horizons.

It struck me tonight there is a bit of irony/coincidence in the fact that the energy source used provide the electrical power to take these pictures and collect the amazing data of Pluto and transmit it back to Earth was plutonium.

Perhaps the patterns we see of segmented moguls surrounded by troughs sometimes filled with residuals of other materials, and the mountain in a moat (maybe a mountain of frozen water sunken into a plain of frozen CO?) are the kinds of features that develop in worlds with cryogenic temperatures, very low atmospheric pressures, and sublimating materials. These are erosions patterns that are not so much shaped by fluid flow as on Earth and a lesser extent Mars, but controlled by the radiant energy exchanges that develop where a small crater or chuck of high-melting substance creates a local view factors resulting in warmer spots that don’t see as much cold deep space and therefore sublimate faster than surrounding areas. Much like a canyon on Earth had its beginnings were the first rivulet of water began to make a groove in the soil. This may explain why the comet that Rosetta is orbiting has eroded to form the deep ravine forming a neckline between its two lobes. All this will be great to learn about as the data comes in and can be analyzed.