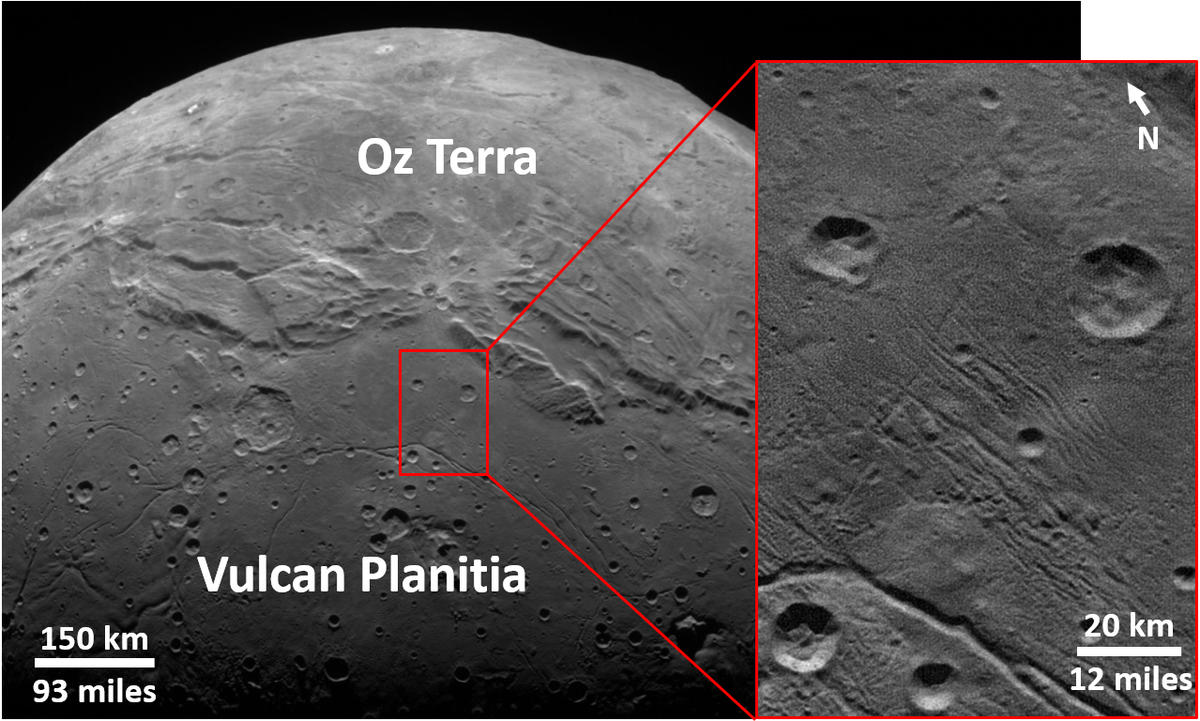 A study of the craters and geology on Pluto and Charon found there were fewer small craters than expected. This implies that the Kuiper Belt contains relatively small numbers of objects less than one mile in diameter. Photo and Caption Credit: NASA/JHUAPL/LORRI/SwRI

The relatively small number of craters NASA’s New Horizons spacecraft found on Pluto’s largest moon Charon indicates very small objects are rare in the Kuiper Belt, according to a new study published in the journal Science.

Craters on planets and moons are records of impacts by small bodies over long periods of time. These impactors are far too small to be seen from Earth, even by space telescopes. This is why data from New Horizons, which is now traveling through the doughnut-shaped region of icy objects beyond Neptune and Pluto, is so valuable in helping scientists better understand this distant region.

Kelsi Singer of the Southwest Research Institute (SwRI) and New Horizons co-investigator, led a team of scientists who studied data from the spacecraft’s 2015 Pluto system flyby in an effort to determine whether small impactors ranging from 300 feet to one mile (91 meters to 1.6 kilometers) are common or rare in the Kuiper Belt.

“These smaller Kuiper Belt Objects (KBOs) are much too small to really see with any telescopes from such a great distance,” Singer said in a press release. “New Horizons flying directly through the Kuiper Belt and collecting data there was key to learning about both large and small bodies of the Belt.”

Early results from this year’s Jan. 1 flyby of KBO Ultima Thule also reveals fewer craters than scientists expected to see on its surface.

Asteroids and KBOs are objects left over from the solar system’s formation 4.6 billion years ago when the Sun and planets formed from a collapsing molecular cloud.

“This surprising lack of small KBOs changes our view of the Kuiper Belt and shows that either its formation or evolution, or both, were somewhat  different than those of the asteroid belt between Mars and Jupiter,” Singer said. “Perhaps the asteroid belt has more small bodies than the Kuiper Belt because its population experiences more collisions that break up larger objects into smaller ones.”

Another goal of the New Horizons mission, in addition to studying the Pluto system and Ultima Thule up close, is to study the Kuiper Belt in situ and give scientists a better understanding of its makeup.

“With the successful flyby of Ultima Thule early this year, we now have three distinct planetary surfaces to study,” Singer said. “This paper uses data from the Pluto-Charon flyby, which indicate fewer small impact craters than expected. And preliminary results from Ultima Thule support this finding.”

New Horizons principal investigator Alan Stern, also of SwRI, described these findings as a significant breakthrough for scientists seeking insight into the nature of the Kuiper Belt.

Now past Ultima Thule, New Horizons continues to study and collect data on its Kuiper Belt environment. The spacecraft is expected to be operational into the 2030s and may visit a third target if one can be found along its path.