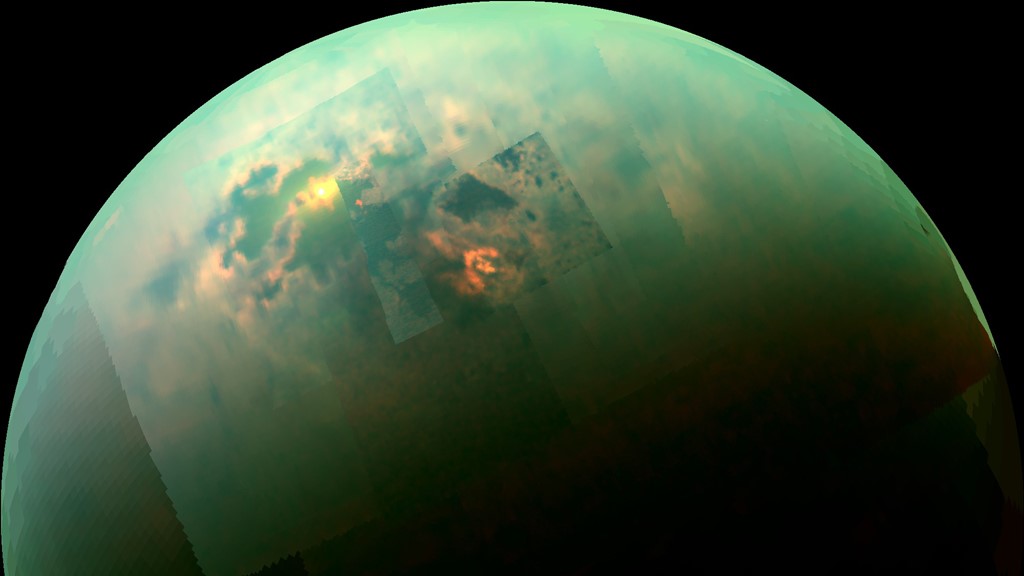 Titan as seen in near-infrared by the Cassini spacecraft. Photo Credit: NASA/JPL-Caltech/University of Arizona/University of Idaho

Methane lakes on Titan, Saturn’s largest moon, run deep, and play a crucial role in the moon’s hydrologic cycle, according to two new studies published in the journal Nature Astronomy, both based on data collected by NASA’s Cassini orbiter during its last close flyby of Titan on April 22, 2017.

Using its radar instrument, Cassini mapped over 620,000 square miles (1.6 million square kilometers) of Titan’s lakes and seas during its long study of the Saturn system between 2004 and 2017.

The spacecraft sent radio waves onto Titan, then measured their echo or return signal, from which they obtained crucial data regarding the moon’s geology and both the content and depth of the methane lakes. At the same time, imaging systems capable of seeing through atmospheric haze captured images of Titan’s surface. 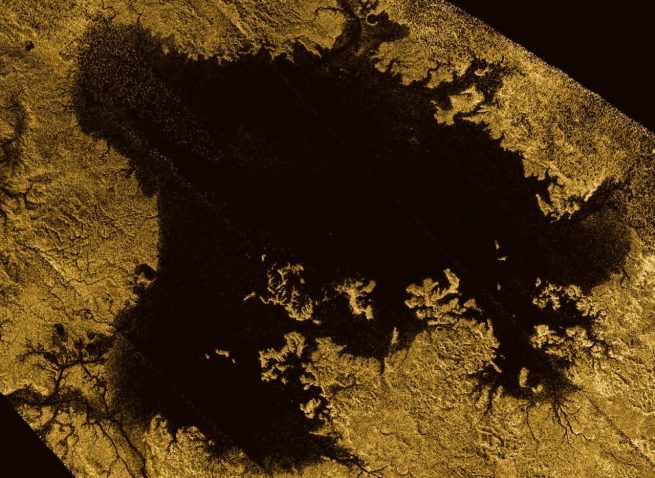 Ligeia Mare, shown in here in data obtained by NASA’s Cassini spacecraft, is the second largest known body of liquid on Saturn’s moon Titan. It is filled with liquid hydrocarbons, such as ethane and methane, and is one of the many seas and lakes that bejewel Titan’s north polar region. Image Credit: NASA/JPL-Caltech/ASI/Cornell

The 2017 observations revealed that small methane lakes on Titan’s northern hemisphere are more than 300 feet (100 meters) deeper than previously thought. They also showed the moon’s smaller lakes to be filled with methane just like their larger counterparts, a phenomenon that was not expected.

Titan experiences a hydrologic cycle much like Earth does, except Titan’s cycle involves the hydrocarbons methane and ethane instead of water. Because the moon is so cold, with an average temperature of minus 290 degrees Fahrenheit (minus 179 degrees Celsius), these hydrocarbons, which would be gases on Earth, are in liquid form on Titan.

As water on Earth evaporates from oceans to form clouds, then falls back to the Earth as rain, methane and ethane undergo the same cycle on Titan. While both are hydrocarbons, ethane has a higher number of carbon and hydrogen atoms than methane and is therefore heavier.

Before Cassini’s final flyby of Titan, the spacecraft had studied Ontario Lacus, the sole lake located in the moon’s southern hemisphere, and found it to be composed of both methane and ethane.

Earth and Titan are the only solar system worlds known to have liquids on their surfaces though several icy objects, such as Jupiter’s moon Europa, Saturn’s moon Enceladus, and dwarf planets Ceres and Pluto likely harbor subsurface oceans.

“Every time we make discoveries on Titan, Titan becomes more and more mysterious. But these new measurements help give an answer to a few key questions. We can actually now better understand the hydrology of Titan,” said Cassini radar scientist Marco Mastrogiuseppe of Caltech. 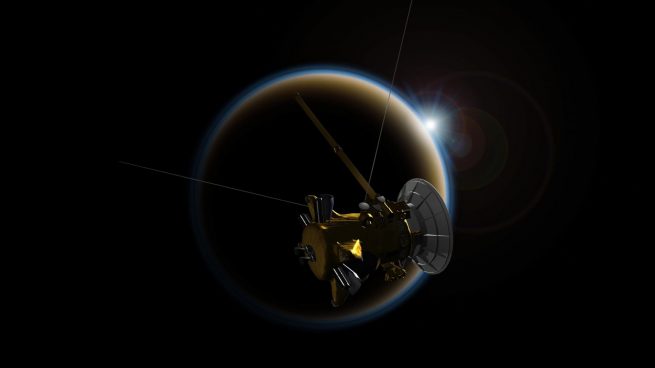 An artist’s rendering of Cassini making its final close flyby of Saturn’s moon Titan on April 22, 2017, using its radar to reveal the moon’s surface lakes and seas one last time. Image Credit: NASA/JPL-Caltech

In addition to revealing the unexpected depth of Titan’s smaller lakes, the first study reveals the hydrology of the northern hemisphere’s eastern and western sides to be completely different, another surprise to scientists.

While the eastern side features large lakes at low elevations, the western side is composed of small lakes at higher elevations, such as the tops of hills and plateaus. Like mesas in Arizona, these hills rise several hundred feet above the surface.

These smaller though equally deep lakes probably formed when the bedrocks of ice and organic compounds surrounding them collapsed. Similar features, known as karstic lakes, are seen on Earth.

The second paper focuses on transitory lakes, which seem to appear, disappear, and reappear with the changes of seasons on Titan. Cassini observed these changes, which provided scientists with new insights into Titan’s hydrologic cycle and were observed in both the infrared and with radar.

From this data, scientists think Titan’s deep lakes and seas are replenished by hydrocarbon rain. Eventually, some of the hydrocarbons in the lakes evaporate into the moon’s hazy atmosphere or possibly travel into its subsurface. The latter would mean Titan also harbors subsurface lakes.

“One possibility is that these transient features could have been shallower bodies of liquid that over the course of the season evaporated and infiltrated into the subsurface,” said Shannon MacKenzie of the Johns Hopkins University Applied Physics Laboratory (JHUAPL) in Maryland.