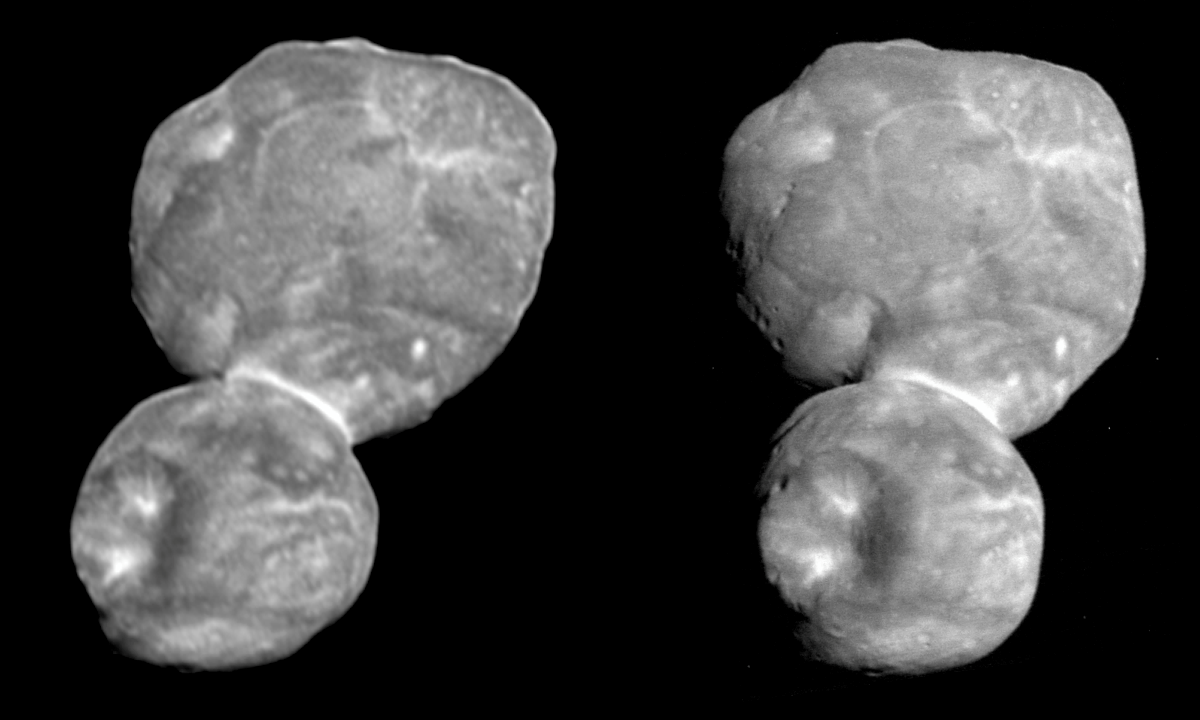 For this view, cross your eyes until the pair of images merges into one. It might help to place your finger or a pen just a couple of inches from your eyes, and focus on it. When the background image comes into focus, remove the closer object and concentrate on the image. Photo and Caption Credit: NASA/Johns Hopkins University Applied Physics Laboratory/Southwest Research Institute/National Optical Astronomy Observatory

Scientists on NASA’s New Horizons team have created the most detailed 3D image of Ultima Thule to date by combining pictures of the Kuiper Belt Object (KBO) taken from a variety of angles by the spacecraft’s Long Range Reconnaissance Imager (LORRI).

Combining high-resolution images taken from different angles produces what is known as the “binocular effect,” which makes it possible to see an object in three dimensions.

Although the closer images have higher resolution than the more distant ones, their quality is lower because they were taken with much shorter exposure times. However, this does not lessen the quality of the combined 3D image, which when viewed with 3D glasses provides the most accurate yet view of the KBO’s surface features and actual shape.

“These views provide a clearer picture of Ultima Thule’s overall shape, including the flattened shape of the large lobe, as well as the shape of individual topographic regions, such as the ‘neck’ connecting the two lobes, the large depression on the smaller lobe, and hills and valleys on the larger lobe,” said New Horizons Principal Investigator Alan Stern of the Southwest Research Institute (SwRI) in Boulder, Colorado.

Ultima Thule is located four billion miles (6 billion kilometers) from Earth, and these detailed images will give scientists valuable insight into the KBO for many years.

“We have been looking forward to this high-quality stereo view since long before the flyby. Now, we can use this rich, three-dimensional view to help us understand how Ultima Thule came to have its extraordinary shape,” said New Horizons deputy project scientist John Spencer, also of SwRI.

Return of all flyby data will take a total of 20 months.