With the completion of its first orbit, Parker Solar Probe is pulling back the curtains of our parent star and is well on its way to rewriting humanity’s understanding of how stars work.

When the $1.5 billion spacecraft reached what is known as aphelion, the farthest point in its orbit from the Sun, it marked the completion of its first orbit. Parker Solar Probe will reach is second close approach to the Sun—perihelion—on April 4.

While most of the vehicle’s mission still remains ahead, program managers have already begun reviewing the data the probe has collected. The scientists working on the project have noted how the Parker Solar Probe spacecraft has revolutionized their understandings of the inner workings of the celestial body that provides the energy needed to sustain life on Earth.

“It’s been an illuminating and fascinating first orbit,” said Parker Solar Probe Project Manager Andy Driesman of the Johns Hopkins University Applied Physics Laboratory in a NASA news release. “We’ve learned a lot about how the spacecraft operates and reacts to the solar environment, and I’m proud to say the team’s projections have been very accurate.”

To send Parker Solar Probe closer to the Sun, the spacecraft was instructed to complete a flyby of Venus. Image Credit: NASA

The spacecraft has been on the job since the start of January 2019 (Phase E) but all of the spacecraft’s systems are working as advertised. Its four primary science instruments have been scooping up data and transmitting it back to Earth through NASA’s Deep Space Network.

So far, an estimated 17 gigabits have been downloaded with all of the data Parker collected on its first circuit around the Sun expected to be downloaded by April. To prepare the spacecraft for its second close approach, its solid state recorder will be cleared of the data it has beamed home.

While it might seem like everything is set and scientists only need to sit back and collect the information, in some ways PSP is like any vehicle that traverses either the air or oceans. As it is prepared to continue its voyage, the personnel monitoring and handling the spacecraft will provide it with new navigational information along with a month’s worth of commands to help keep it on the desired track. 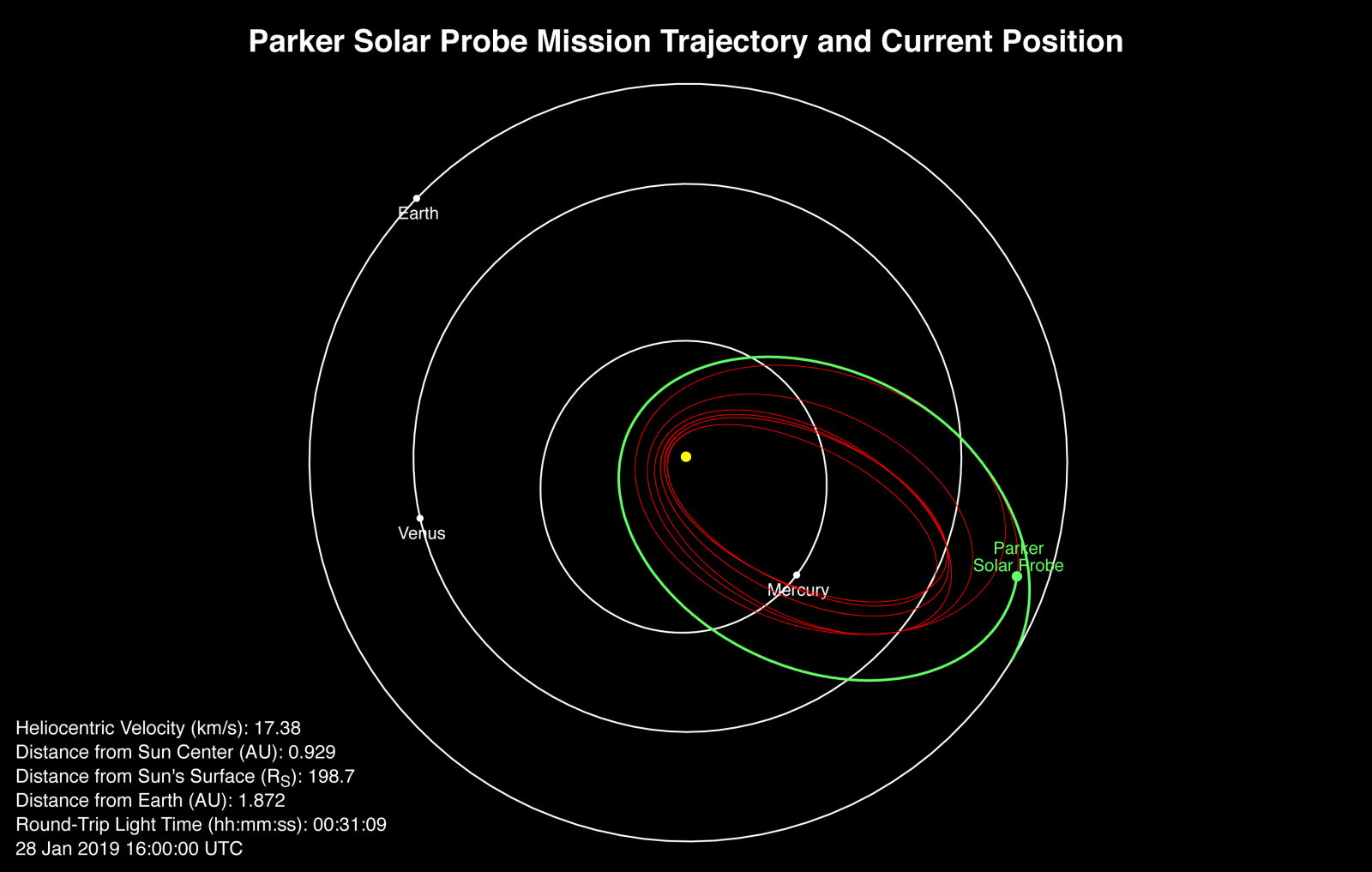 NASA released the following graphic which details Parker Solar Probe’s speed, distance from the Sun and other key details about the mission as of Jan. 28, 2019. Image Credit: NASA

Parker Solar Probe is designed to help humanity gain a better understanding of why the Sun’s corona, which is closer to the star’s surface, is hotter than deeper within the Sun where nuclear fusion takes place. To keep it in the location it needs to be in to do its job will require a total of seven gravity assist flybys of Venus.

“We’ve always said that we don’t know what to expect until we look at the data,” said Project Scientist Nour Raouafi, also of APL. “The data we have received hints at many new things that we’ve not seen before and at potential new discoveries. Parker Solar Probe is delivering on the mission’s promise of revealing the mysteries of our Sun.”

The spacecraft is named in honor of Eugene Parker, an astrophysicist who proposed that the Sun created a “solar wind” and other aspects of the solar dynamic. Two “experts” with The Astrophysical Journal rejected these notions. However, they were wrong and no spacecraft bear their names. Parker is the only person to have a spacecraft named after them while they lived and attended the launch.