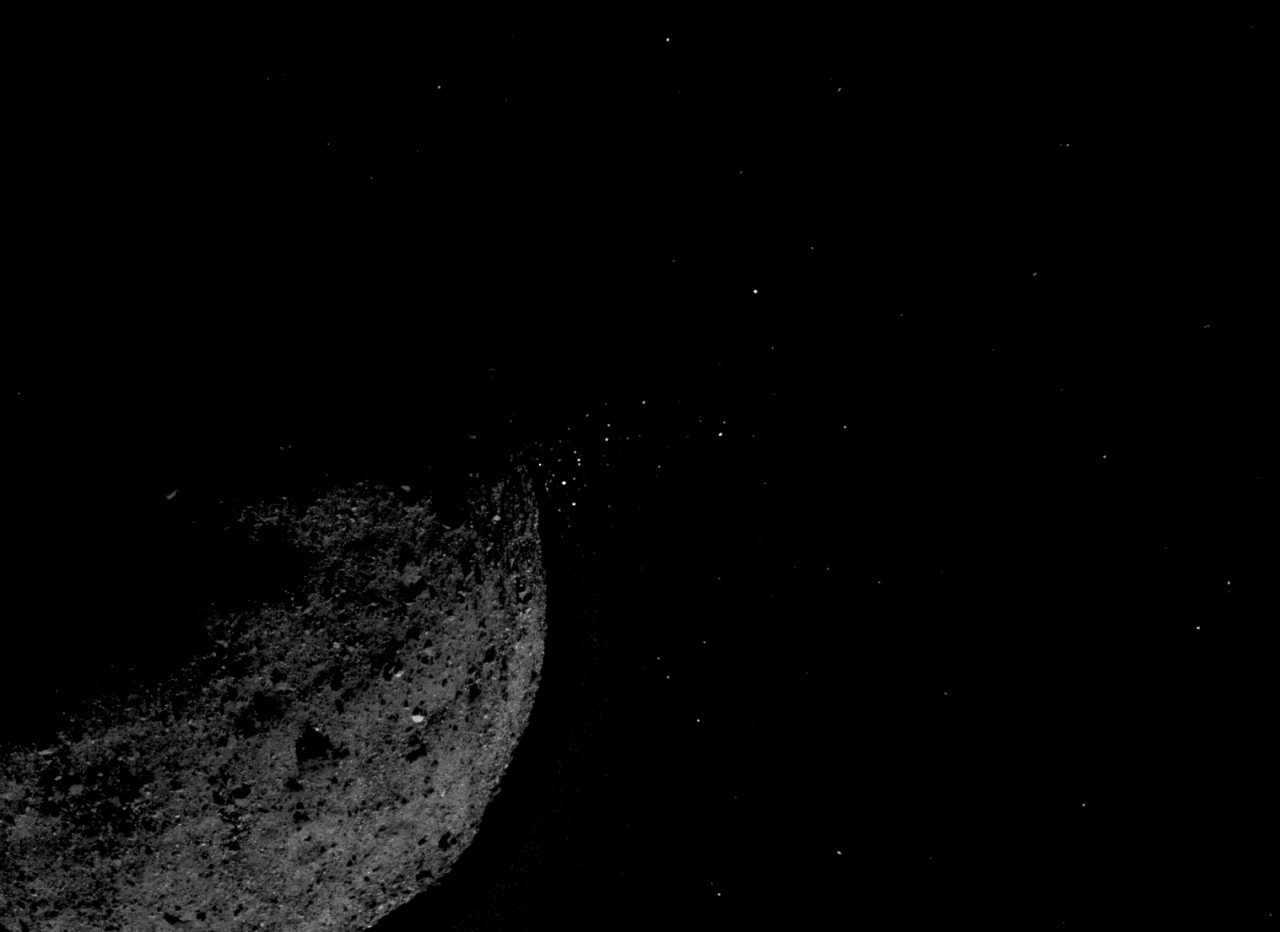 This view of asteroid Bennu ejecting particles from its surface on Jan. 19, 2019, was created by combining two images taken on board NASA’s OSIRIS-REx spacecraft. Photo and Caption Credit: NASA/Goddard/University of Arizona/Lockheed Martin

Recent observations also show that the asteroid’s surface is more rugged than previously expected, and the OSRIS-REx mission team will likely have to change the spacecraft’s flight and sample collection plans due to the rough terrain.

ORSIS-REx arrived in orbit around Bennu on Dec. 31, 2018. If all goes well, the spacecraft is expected to return a sample of the asteroid to Earth in 2023.

“The discovery of plumes is one of the biggest surprises of my scientific career,” Dante Lauretta, OSIRIS-REx principal investigator at the University of Arizona, Tucson, said in a NASA news release. “And the rugged terrain went against all of our predictions. Bennu is already surprising us, and our exciting journey there is just getting started.”

The plumes were detected in January as OSIRIS-REx orbited Bennu at a distance of about 1 mile (1.61 kilometers). After determining that the particles did not pose a risk to the spacecraft, the mission team increased the frequency of observations.

Additional particle plumes, or “ejection events” were detected over the next two months. While many of the particles were thrown clear of Bennu, some were tracked orbiting the asteroid before falling back to the surface. NASA said the mission’s science team is continuing to study the particle plumes and their possible causes.

“The first three months of OSIRIS-REx’s up-close investigation of Bennu have reminded us what discovery is all about—surprises, quick thinking, and flexibility,” said Lori Glaze, acting director of the Planetary Science Division at NASA Headquarters in Washington. “We study asteroids like Bennu to learn about the origin of the solar system. OSIRIS-REx’s sample will help us answer some of the biggest questions about where we come from.” 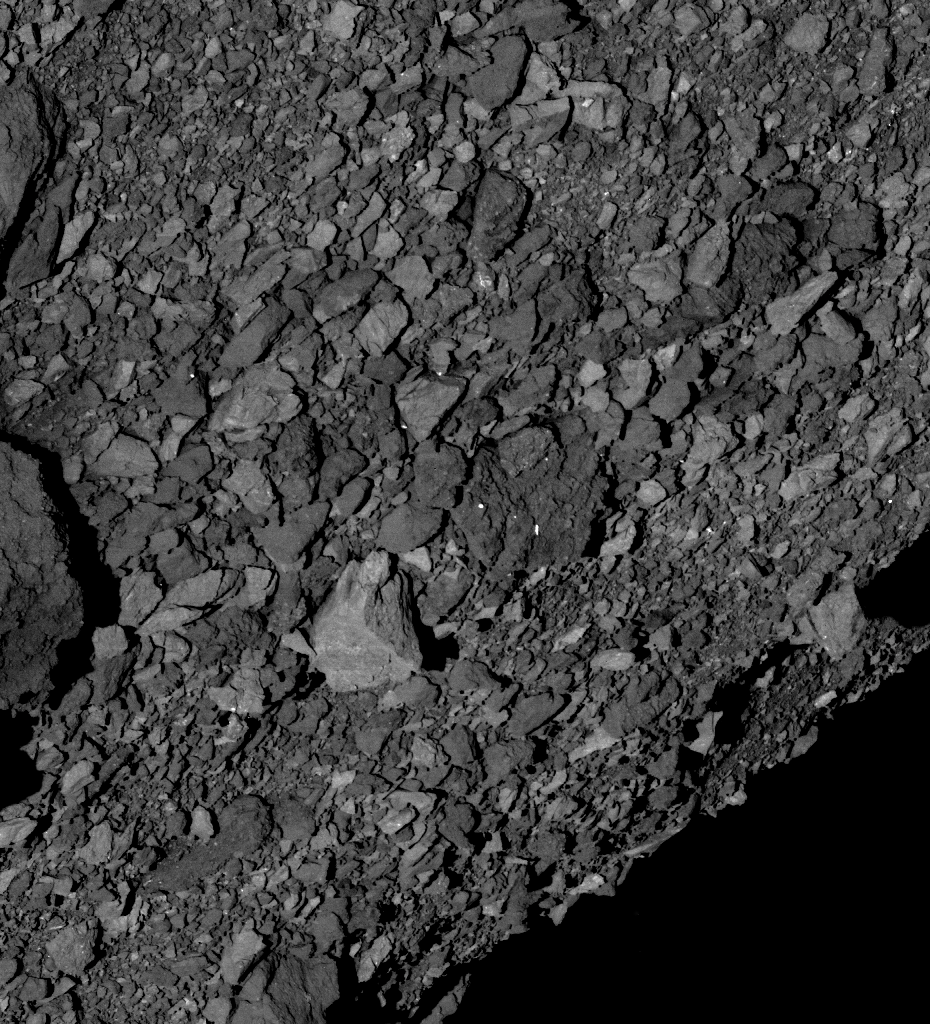 This image shows a view across asteroid Bennu’s southern hemisphere and into space. It demonstrates the number and distribution of boulders across Bennu’s surface. Photo and Caption Credit: NASA/Goddard/University of Arizona

Another unexpected find was the number and size of boulders on the asteroid’s surface. Data from Earth-based observations had led the team to expect a smooth surface with a few large boulders. Observations from orbit showed that Bennu’s entire surface is rough and covered with boulders.

The greater than expected density of boulders will likely necessitate changes to the mission strategy for sample collection, called Touch-and-Go (TAG). The original plan called for a hazard-free sample site with an 82-foot (25-meter) radius.

Due to the unexpectedly rough terrain, NASA said the mission team has been unable to find a site that large on Bennu and is currently identifying possible locations much smaller in radius.

The larger number of boulders and the smaller sample site is also expected to require much more precise maneuvering by the spacecraft during its descent to the surface. The OSIRIS-REx mission team is currently developing a new approach, called Bullseye TAG, to target smaller sample sites.

“Throughout OSIRIS-REx’s operations near Bennu, our spacecraft and operations team have demonstrated that we can achieve system performance that beats design requirements,” said Rich Burns, the project manager of OSIRIS-REx at NASA’s Goddard Space Flight Center in Greenbelt, Maryland. “Bennu has issued us a challenge to deal with its rugged terrain, and we are confident that OSIRIS-REx is up to the task.” 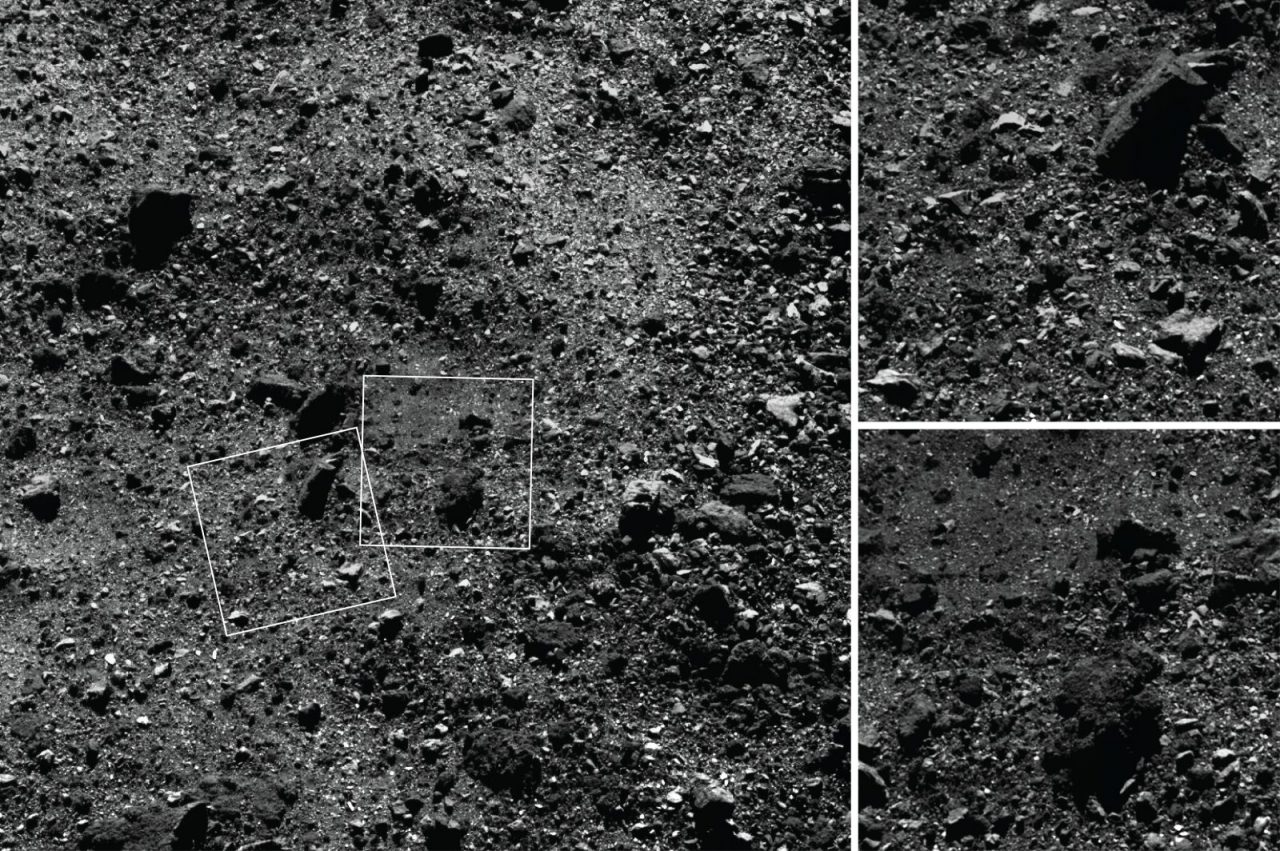 This trio of images acquired by NASA’s OSIRIS-REx spacecraft shows a wide shot and two close-ups of a region in asteroid Bennu’s northern hemisphere. The wide-angle image, left, obtained by the spacecraft’s MapCam camera, shows a 590-foot (180-meter) wide area with many rocks, including some large boulders, and a “pond” of regolith that is mostly devoid of large rocks. The two closer images, obtained by the high-resolution PolyCam camera, show details of areas in the MapCam image, specifically a 50-foot (15 meter) boulder (top) and the regolith pond (bottom). Photo and Caption Credit: NASA/Goddard/University of Arizona