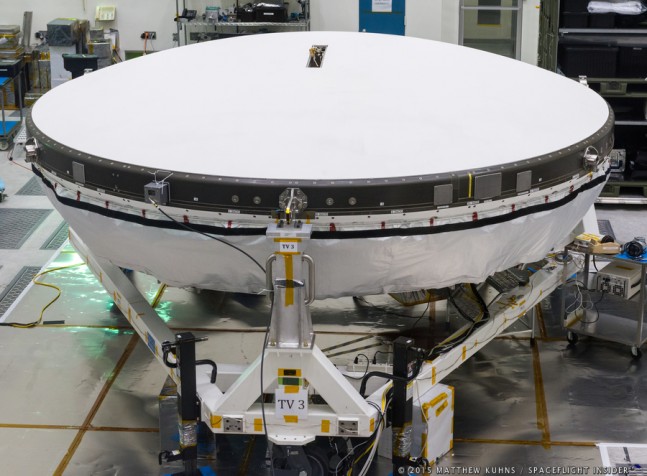 PASADENA, Ca — SpaceFlight Insider was provided with a review of NASA’s Low-Density Supersonic Decelerator (LDSD ) test article with other members of the press during a media event held on March 31 at a clean room located at NASA’s Jet Propulsion Laboratory in Pasadena, California. The flying saucer will be delivered to “near space” after lifting off from the U.S. Navy’s Pacific Missile Range Facility on Kauai, Hawaii, in June of this year.

Provided with access to clean rooms at NASA’s sprawling center, the focal point of the tour was always the 15-foot-wide, 7,000 lb test article which was even put through a “spin-table” test (see the exclusive SpaceFlight Insider video below). NASA scheduled the media event around a spin test that the LDSD was set to undergo. Photo Credit: Matthew Kuhns / SpaceFlight Insider

LDSD has been described as a “crosscutting demonstration mission”; the vehicle is being tested so as to validate the design concept of a system that is planned for use as a heat shield for spacecraft sent to the planet Mars or other terrestrial planets (those with atmospheres). LDSD might also allow the space agency to send probes to more destinations on those worlds by allowing for landings at higher-altitude sites. The LDSD is scheduled to conduct several test over the course of the next 18 months. Photo Credit: Matthew Kuhns / SpaceFlight Insider

Designed and developed as part of NASA’s Space Technology Mission Directorate, the LDSD will fly to an altitude of 180,000 feet (54,864 meters) – an elevation which NASA scientists say that, as the LDSD returns to Earth, will emulate the conditions that the spacecraft would encounter when entering the Martian atmosphere.

The main component that will handle re-entry is named the Supersonic Inflatable Aerodynamic Deceleration system or “SIAD”.

James Reuther, Deputy Associate Administrator of Programs for the Space Technology Mission Directorate, detailed that during the June 2014 test flight the parachute did not work the last time (it was shredded during deployment). NASA will conduct the second test flight this summer with the follow-on test scheduled to take place sometime in 2016.

The test article uses a parachute that is far larger than any has been sent to Mars previously and uses an inflatable system that expands to increase its surface area – in less than one second.

“To get to Mars, we need to develop new technologies, that’s the objective – expanding ability to do space science,” said Jeffrey Weiss, the project’s deputy program manager. “Only through these kinds of flight tests can we determine if these technologies work. We want to land bigger things on Mars – this project is looking at how to take advantage of the Martian atmosphere to slow us down.”

The concept behind LDSD’s design is based off of using a wide surface area to slow spacecraft entering an atmosphere – in this case Mars’. LDSD’s inflatable shield was constructed using Kevlar, which is used to protect soldiers and law-enforcement personnel. During the test slated for this summer, a balloon will be launched, one estimated as being about the size of the Rose Bowl. Both the balloon and LDSD will travel to an altitude of about 120,000 feet (36,576 meters). The test article will plummet for about one second before a rocket begins spinning the vehicle to help stabilize it. Shortly thereafter, a Star 48B long-nozzle, solid-fueled rocket engine affixed to the LDSD’s bottom section will activate – boosting the vehicle up to speeds estimated at reaching Mach 4 and an altitude of 180,000 feet (54,864 meters).

Once the Star 48B shuts off, the LDSD will be de-spun and the SIAD will be deployed. The craft will then decelerate, reenter Earth’s atmosphere and splash down in the Pacific Ocean.