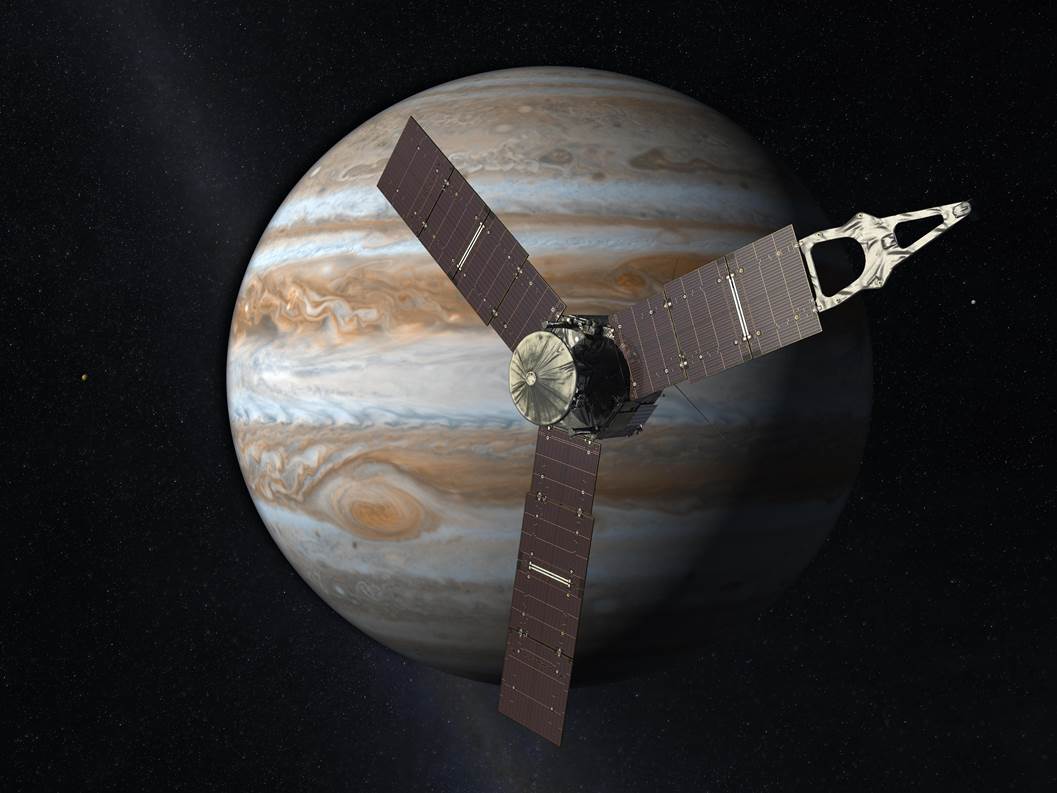 NASA's Juno spacecraft has recovered from a recent glitch and another NASA planetary mission has achieved a crucial milestone. Image Credit: NASA

The gas giant Jupiter safeguards many secrets crucial to our understanding of the evolution of our solar system. It could also provide insights on how giant planets form and the role these titans played in putting together the rest of the solar neighborhood. NASA’s Juno spacecraft is on its way to reveal those mysteries as the probe is on course for its planned arrival at Jupiter on July 4, 2016. NASA’s Juno spacecraft in the clean room, prior to launch. Photo Credit: NASA/JPL-Caltech

“On that date, Juno will make its first dive over the planet’s poles, firing its rocket engine to slow down just enough for the giant planet’s gravity to capture the spacecraft into orbit,” Scott Bolton of the Southwest Research Institute in San Antonio, Texas, Juno’s principal investigator told astrowatch.net. “All of Juno’s instruments are healthy and working well. The Juno team anticipates some truly wonderful results when their experiments reach Jupiter.”

Like in Greek and Roman mythology, goddess Juno, able to peer through the clouds and reveal Jupiter’s true nature, the Juno spacecraft will look beneath the clouds to better understand the planet’s structure and history.

“When Juno passes over the planet, coming within just 3000 miles (5000 kilometers) of the cloud tops, its color camera (called JunoCam) will obtain some of the best-ever close-up views of the clouds,” Bolton said. “By studying Jupiter’s atmosphere we can learn a great deal about the planet itself, our solar system’s history, and giant planets in general, including those outside our solar system.” The spacecraft will measure the amount of water and ammonia in Jupiter’s atmosphere and find out if the planet has a solid core, resolving the origin of this giant planet and thereby the solar system.

“One of the most important things Juno will tell us is the water content of Jupiter’s atmosphere. The amount of water — or more precisely, the amount of oxygen — is one of the key missing ingredients in the recipe for how Jupiter was made. Several different theories about the conditions Jupiter’s formation depend on the amount of oxygen the planet contains,” Bolton noticed. “Juno will measure this quantity globally, helping us understand which version of Jupiter’s story is most likely to be the correct one.”

Jupiter’s magnetosphere will also be of interest to Juno, as this powerful magnetic environment creates the brightest auroras in our solar system when charged particles precipitate down into the planet’s atmosphere. Juno will directly sample the charged particles and magnetic fields near Jupiter’s poles for the first time. “Juno will have the first-ever view of Jupiter’s north and south poles, as it will pass directly over them on each orbit. No spacecraft has ever explored these places, so we’re certain to see and learn new things.” Juno will use its radiometers to measure water content and provide the most complete picture of Jupiter’s swirling cloud layers. Image Credit: NASA/JPL-Caltech

After the arrival at Jupiter, the spacecraft will circle the planet 33 times, from pole to pole, and use its collection of science instruments to probe beneath the obscuring cloud cover.

The Juno mission is part of the New Frontiers Program managed at NASA’s Marshall Space Flight Center in Huntsville, Ala. NASA’s Jet Propulsion Laboratory in Pasadena, Calif., manages the mission for the principal investigator Scott Bolton.

Oh yay…. the low budget poor man’s JIMO is about to find all the answers…. not. Betcha the current effort to go to Europa will go through its own share of cancellations, thus ending up with another useless flying toaster oven like this.

Some of the most awesome moons in the solar system- possibly with subsurface oceans- and we send a robot to look at gas giant clouds. I am so unimpressed. No wonder NASA is criticized. It might be wonderful science but the taxpayer might be more inclined to fund these science missions if they had something to get excited about first. Gas clouds don’t do it; oceans do. Callisto is the only large moon outside Jupiter’s radiation belts where astronauts might land someday. We need to go there with robots. But since it takes five years to get there I guess we will have to wait until someone at NASA pays attention to who is paying them.