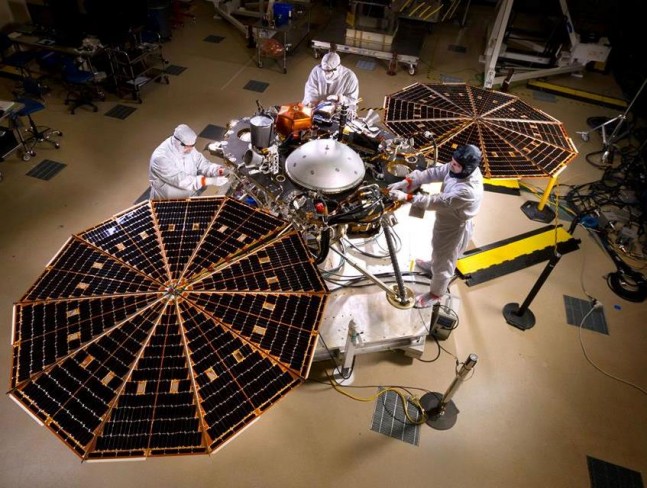 Lockheed Martin Corporation (LMCO) has completed the assembly of NASA’s Interior Exploration using Seismic Investigations, Geodesy and Heat Transport (InSight) Mars lander. The craft has finished its construction phase by Lockheed Martin and will now undergo required checks to ensure that the mission successfully joins the other NASA craft above and on the surface of the Red Planet.

Lockheed Martin is no stranger to missions to Mars, having been involved with every mission to the Red Planet for the past four decades. This fact was one that one official at LMCO highlighted when asked about the next NASA spacecraft planned to conduct a touchdown in the red Martian dust. The back shell of NASA’s InSight spacecraft being lowered onto the lander in a clean room at Lockheed Martin. (Click to enlarge.) Photo Credit: NASA/JPL-Caltech/Lockheed Martin

“The InSight mission is a NASA Discovery mission and is similar in design to the Phoenix Mars lander use in 2008 to study ground ice near the north pole of Mars. The reuse of this technology, developed and built by Lockheed Martin, provided a low-risk path to Mars without the added cost of designing and testing a new system from scratch,” Stu Spath, InSight program manager at Lockheed Martin Space Systems Company, told SpaceFlight Insider. “Even though InSight is based on the successful Phoenix Mars lander, its computers and avionics are the latest generation drawing from MAVEN, the most recent mission to Mars.”

“The assembly of InSight went very well, and now it’s time to see how it performs,” Spath said. “The environmental testing regimen is designed to wring out any issues with the spacecraft so we can resolve them while it’s here on Earth. This phase takes nearly as long as assembly, but we want to make sure we deliver a vehicle to NASA that will perform as expected in extreme environments.”

All missions that are launched must endure the intense vibration, acoustic stresses and an array of other harsh conditions that are required for them to reach their various destinations. Even after InSight reaches orbit, its trials will not end. While the shaking and pressures caused by launch might have ceased, it must then survive the extreme cold and vacuum that is space. Technicians in a Lockheed Martin clean room near Denver prepare NASA’s InSight Mars lander for propulsion proof and leak testing on Oct. 31, 2014. Following the test, the lander was moved to another clean room for the start of the mission’s assembly, test and launch operations (ATLO) phase. (Click to enlarge.) Photo and Caption Credit: NASA

The battery of tests the lander is now undergoing will help to look for any issues that can then be addressed prior to flight. In order to determine how the lander handles the stresses of launch, cruise, landing, and the extreme Martian environment, it will be exposed to various tests: reverberant acoustic, thermal vacuum test (cruise configuration), separation and deployment shock, internal electromagnetic interference and compatibility testing, as well as a second thermal vacuum test.

The second thermal vacuum test is important in terms of the most critical time for the spacecraft – its time on the surface of the hostile alien world. This test will subject InSight to the types of temperatures and atmospheric pressures it will experience as it operates on the surface of Mars.

When LMCO was asked about what the next steps for NASA’s InSight mission would be, Spath provided some details about what the lander will encounter on the road to launch to SpaceFlight Insider.

“InSight will now move through its environmental testing phase. The first of these tests will be a thermal vacuum test in the spacecraft’s ‘cruise’ configuration used during its seven-month journey to Mars. Environmental testing will run through the end of the year. Following that, we will ship the spacecraft in early 2016 to Vandenberg Air Force Base for launch preparations,” Spath said. InSight is based on the proven design used by the Mars Phoenix lander, which touched down on the Red Planet in May of 2008. (Click to enlarge) Photo Credit: NASA / Lockheed Martin

The InSight lander, safely encapsulated during its long voyage to Mars, will work to provide a better understanding of the dynamics of the Martian interior. The spacecraft will land on the surface of Mars in September 2016 and complete its primary mission in September 2018.

“It’s great to see the spacecraft put together in its launch configuration,” said InSight Project Manager Tom Hoffman at NASA’s Jet Propulsion Laboratory (JPL). “Many teams from across the globe have worked long hours to get their elements of the system delivered for these tests. There still remains much work to do before we are ready for launch, but it is fantastic to get to this critical milestone.”

Nice and knowledgeable information. Thank you to share it with us.