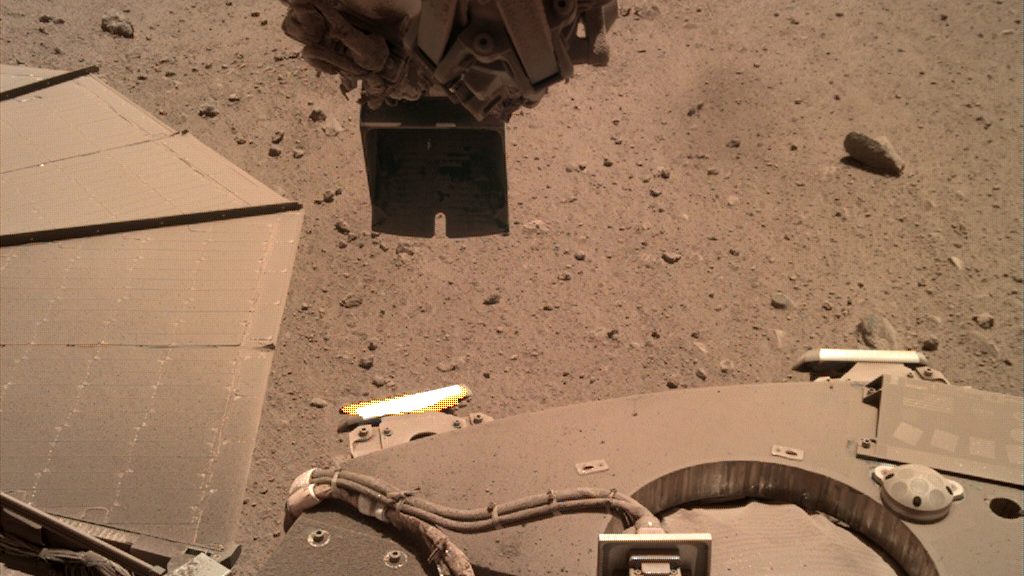 NASA’s InSight Mars lander trickled sand into the wind in order to clean off a bit of dust from its solar panels in order to boost its power. Credit: NASA

InSight has called the Martian surface home for almost three years, having landed in November 2018. The mission was originally planned to last only two years.

A time lapse of the first dust cleaning attempt on InSight’s solar panels on May 22, 2021. Credit: NASA

However, NASA recently announced a two-year extension to InSight’s science mission, meaning the buildup of dust on its solar panels could prove problematic going forward. With power levels declining, dust needs to somehow be removed.

Scientists at NASA’s Jet Propulsion Laboratory came up with what appears on the surface to be a counter-intuitive solution: trickling larger particles of sand near lander’s solar panels to loosen the ones that are already there.

While this method may sound counter-productive, it actually makes perfect sense when the idea of the Martian wind comes into play. By using the lander’s robotic arm to “scoop up” sand and then trickle it onto lander’s payload deck, NASA said the wind could push some of the dust particles over the solar panels and knock off and carry away some of the smaller particles.

When this technique was tried on May 22, 2021, it resulted in a increase of about 30 watt-hours of energy per Martian day.

“We weren’t sure this would work, but we’re delighted that it did,” Golombek said in a NASA news release.

When it was tried again on June 5, it resulted in an additional 2% boost in power per day, according to NASA. More attempts are expected in the future.

NASA said there is no guarantee the lander will have all the power it needs, but these recent cleanings should give InSight “some helpful margin” in its power reserves as Mars approaches aphelion, its farthest point from the Sun.

With my solar panels gathering dust, why would I pour more dirt on myself? My team asked me to try something that seems crazy, but it actually worked! It cleaned some dust off my solar panels, giving me a small power boost.