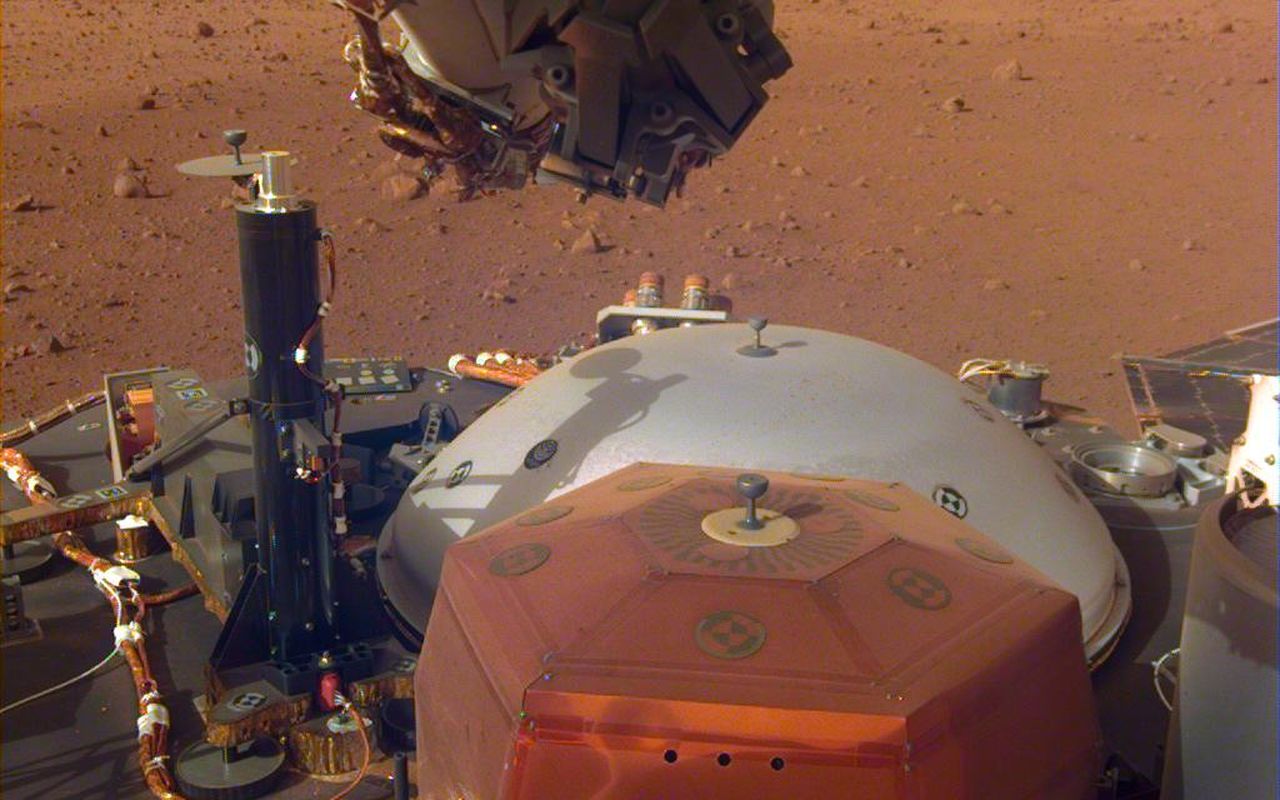 This image from InSight’s robotic-arm mounted Instrument Deployment Camera shows the instruments on the spacecraft’s deck, with the Martian surface of Elysium Planitia in the background. The image was received on Dec. 4, 2018 (Sol 8). Image Credit: NASA/JPL-Caltech

NASA’s Mars InSight lander has been getting to known for its new home at Elysium Planitia and preparing for what it will be doing there. As it turns out, one of those things – is listening.

The $829 million lander touched down on a lava plain on Nov. 26. InSight employed the Instrument Deployment Camera mounted on the elbow of its robotic arm to take pictures of the terrain in front it. The InSight mission team at NASA’s Jet Propulsion Laboratory (JPL) in Pasadena, California will use these images to help them determine where to place InSight’s seismometer and heat flow probe. InSight will eventually use the nearly six-foot long (2 meter) arm to pick up and carefully place the science instrument on the Martian surface. 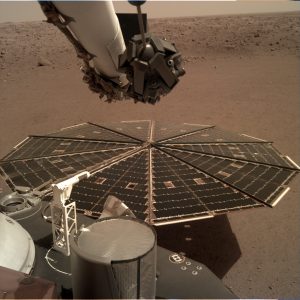 One of InSight’s 7-foot (2.2 meter) wide solar panels was imaged by the lander’s Instrument Deployment Camera, which is fixed to the elbow of its robotic arm. Image Credit: NASA/JPL-Caltech.

“By early next week, we’ll be imaging it in finer detail and creating a full mosaic.” said Bruce Banerdt, the mission’s principal investigator.

InSight has a second camera, called the Instrument Context Camera, mounted beneath the lander’s deck. While this camera will also provide images of the lander’s work area, the view won’t be “scenic” by any stretch of the imagination.

“We had a protective cover on the Instrument Context Camera, but somehow dust still managed to get onto the lens,” Tom Hoffman of JPL, InSight’s project manager stated via an agency-issued response. “While this is unfortunate, it will not affect the role of the camera, which is to take images of the area in front of the lander where our instruments will eventually be placed.”

The robot has been kept busy since it arrived on Mars, using a mosaic of 11 images, it took a picture of itself which it beamed back to Earth. The technique is nothing new, the Mars rover Curiosity uses the same procedure to send images from its location at Gale Crater.

In addition to the images of its new home, InSight has also captured the “sounds” of the Martian winds. Two highly sensitive sensors aboard the lander captured a low rumble that was caused by vibrations from the wind, estimated to be blowing between 10 to 15 miles per hour (5 to 7 meters a second) on Dec. 1.

“Capturing this audio was an unplanned treat,” said Banerdt. “But one of the things our mission is dedicated to is measuring motion on Mars, and naturally that includes motion caused by sound waves.”

The wind vibrations were detected by an air pressure sensor, part of the Auxiliary Payload Sensor Subsystem (APSS) which will collect meteorological data and a seismometer, that is seated on the lander’s deck. It won’t remain there however, it is waiting to be placed on the surface by InSight’s robotic arm.

While the air pressure sensor recorded the wind vibrations directly, the seismometer picked up vibrations caused by wind blowing across InSight’s solar panels.

“The InSight lander acts like a giant ear,” said Tom Pike, InSight science team member and sensor designer at Imperial College London. “The solar panels on the lander’s sides respond to pressure fluctuations of the wind. It’s like InSight is cupping its ears and hearing the Mars wind beating on it. When we looked at the direction of the lander vibrations coming from the solar panels, it matches the expected wind direction at our landing site.”

The seismometer, called the Seismic Experiment for Interior Structure (SEIS), is currently recording vibrational data that researchers plan to use later on to filter out noise from the vehicle generates once SEIS is on the Martian surface and listening for Marsquakes. In a few weeks, InSight will use its robotic arm to carefully place SEIS on the surface and then cover it with a domed shield to protect it from wind and temperature changes.

“The near-absence of rocks, hills and holes means it’ll be extremely safe for our instruments,” Banerdt said. “This might seem like a pretty plain piece of ground if it weren’t on Mars, but we’re glad to see that.”

This area that InSight will carry out its primary investigations is located directly beneath the lander and measures about 14-by-7-feet (4-by-2-meters). It is shaped like a crescent and is beneath the vehicle. InSight will dig some 16 feet (five meters) below where it is situated with its heat-flow-probe. It is hoped data provided by InSight will give scientists back on Earth a better understanding of how terrestrials planets like our own are formed.

NASA’s Mars 2020 rover mission will be equipped with two microphones. The first, provided by JPL, will  record the sound of a Martian landing for the first time. The second microphone is part of the SuperCam and will capture the sound of that instrument’s laser as it zaps different materials. Changes in sound frequency will help identify these materials.

$829 Lander? Somebody forgot the million in that figure or NASA got the best deal ever on a mission to Mars. 🙂