NASA’s Dawn Spacecraft finds evidence of past water on Vesta 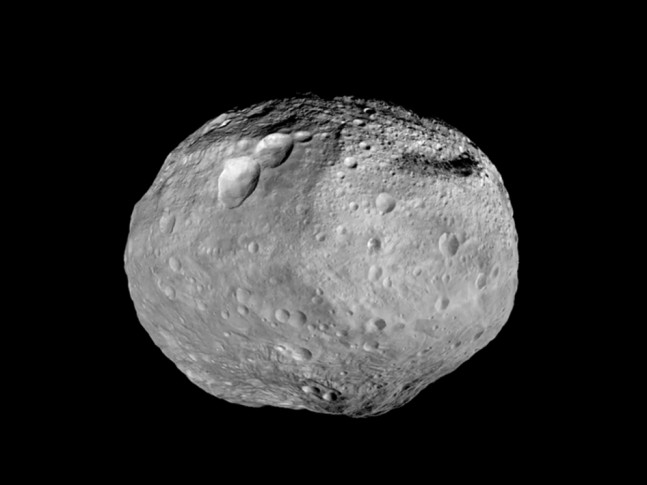 Vesta, the second largest body in the asteroid belt, was the first target for NASA’s Dawn spacecraft. The probe orbited the protoplanet, gathering as much data as it could, from 2011-2013. Once thought to be a completely dry world with freezing temperatures and low surface pressures, new data from Dawn indicates there may have been short-lived water flows on Vesta’s surface.

“Nobody expected to find evidence of water on Vesta. The surface is very cold and there is no atmosphere, so any water on the surface evaporates,” said Jennifer Scully, postgraduate researcher at the University of California, Los Angeles. “However, Vesta is proving to be a very interesting and complex planetary body.”

NASA’s Dawn spacecraft is busy exploring the main asteroid belt, located between Mars and Jupiter, in our solar system. This region of rocky bodies is thought to be the dividing line between inner, terrestrial planets, and the larger gas giants. As the second largest object in the asteroid belt, Vesta was classified as an “asteroid”…until Dawn arrived.

As the probe orbited the then-classified asteroid, researchers analyzed the data received and began to realize Vesta was not an asteroid, but a battered and broken protoplanet left over from the early days of the solar system. Spanning 330 miles (530 kilometers) in diameter, the enigmatic space rock’s development into full planet status was most likely halted by the formation of neighboring gas giant Jupiter. Graphic showing the size differences between Vesta and other asteroids located within the main belt. Image Credit: NASA/JPL-Caltech

As Jupiter formed, its intense gravity perturbed the orbit of the bodies within the asteroid belt, causing them to smash into each other. Evidence of this can be seen by looking at Vesta’s cratered surface. Had it not been for heavy bombardment by neighboring asteroids, Vesta may have eventually coalesced into a terrestrial world like Mars or the Earth.

“These results, and many others from the Dawn mission, show that Vesta is home to many processes that were previously thought to be exclusive to planets,” said UCLA’s Christopher Russell, principal investigator for the Dawn mission. “We look forward to uncovering even more insights and mysteries when Dawn studies Ceres.”

During Dawn’s orbit around Vesta, the probe observed the heavily cratered surface and even detected an iron core. Data collected showed Vesta’s complex surface geology very similar to that of rocky planets. Researchers mapped impact craters that are billions of years old, with newer craters detected inside the older ones.

A new study being published in the journal “Earth and Planetary Science Letters”, by Scully and her colleagues, shows a number of young craters located within gullies and fan-shaped  deposits on Vesta’s surface. The curvature of the gullies is particularly interesting to researchers as they vary significantly from ones formed by the flow of dry materials. Image shows Vesta’s Cornelia Crater. On the right is an inset image showing an example of curved gullies, indicated by the short white arrows, and a fan-shaped deposit, indicated by long white arrows.
Image Credit: NASA/JPL-Caltech/UCLA/MPS/DLR/IDA

“We’re not suggesting that there was a river-like flow of water. We’re suggesting a process similar to debris flows, where a small amount of water mobilizes the sandy and rocky particles into a flow,” Scully said. “These features on Vesta share many characteristics with those formed by debris flows on Earth and Mars,” Scully said.

The narrow gullies span 100 feet (30 meters) wide, with an average length of just over half a mile (900 meters). The Cornelia Crater, measuring 9 miles (15 kilometers) wide, is home to the best examples of curved gullies and fan-shaped deposits Vesta has.

Based on this data, it is believed that Vesta harbors small, localized pockets of subsurface ice. Researchers do not know the origin of this ice, but suspect these icy pockets could be left over from impacts with ice-rich bodies, such as comets. Subsequent impacts would form another crater, and the heat from the impact would melt some of the ice, causing water to flow onto crater walls.

“If present today, the ice would be buried too deeply to be detected by any of Dawn’s instruments,” Scully said. “However, the craters with curved gullies are associated with pitted terrain, which has been independently suggested as evidence for loss of volatile gases from Vesta.”

As the water flowed down the crater walls, it would displace sand and other rocky particles, carving out the surface gullies and producing the fan-shaped deposits once the water evaporated. Craters containing curved gullies, like the Cornelia Crater, tend to be only a few hundred million years old, which is significantly younger than Vesta’s 4.6 billion years. Also, evidence from Dawn’s visible and infrared mapping spectrometer and gamma ray and neutron detector indicates that there is hydrated material within some rocks on Vesta’s surface, suggesting that Vesta is not entirely dry.

Data collected with Dawn’s visible and infrared mapping spectrometer, and its neutron detector shows the presence of hydrated material within certain areas on Vesta’s surface, telling us this world is not as dry as once thought. Experiments conducted at NASA’s Jet Propulsion Laboratory (JPL) indicate that there could be enough time for curved gullies to form on Vesta before all of the water evaporated.

“The sandy and rocky particles in the flow help to slow the rate of evaporation,” Scully described.

Dawn is currently making its final approach to Ceres, the largest body in the asteroid belt, and will insert itself into orbit around the dwarf planet on Mar. 6. The mission is managed by JPL, a division of the California Institute of Technology in Pasadena, for NASA’s Science Mission Directorate, Washington. UCLA is responsible for overall Dawn mission science.

I am sure those are basaltic flows, not water flows. Please note only one half or less of the crater has been reworked by a fault or dyke.
the section of the crater with white straks has a sharp clearly defined rim. What we are looking at is hardened lava flows on the rebworked section of this crater, not water flows in solid basalt. This is not a soft sedimentary proto planet where flows are recorded as in channels or braided syreams in a river bed. A little thought might help.
Chris Landau (geologist)
January 24 2015