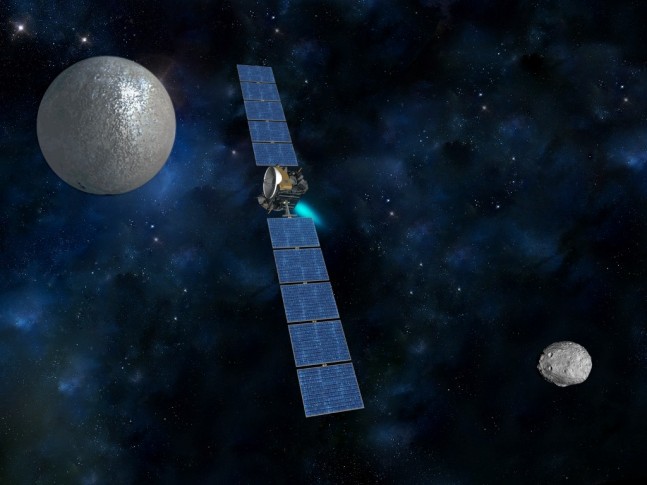 Having concluded its first mapping orbit, NASA’s Dawn spacecraft has produced new video of the two bright spots on the dwarf planet Ceres. The probe completed one 15-day orbit around the tiny planetoid as it uses its scientific instruments to provide new insights and observations into the dynamics behind the formation of these small worlds. Ceres has gained particular interest in both scientific and public circles due to two bright features found on its surface.

These prominent features have been better resolved in a new series of images that were captured by the Dawn spacecraft between May 3-4 of this year. The images were taken from a distance of 8,400 miles (13,600 kilometers).

“Dawn scientists can now conclude that the intense brightness of these spots is due to the reflection of sunlight by highly reflective material on the surface, possibly ice,” said Christopher Russell, principal investigator for the Dawn mission from the University of California.

This is the closest view possible of these bright spots that are located within a crater in Ceres’ northern hemisphere.

According to NASA, these “spots” are actually made up of numerous smaller spots of which the exact composition is unknown at this time.

Dawn’s imaging capabilities have provided scientists with a better understanding of Ceres’ craters, their shapes, as well as the processes behind other geological features on the tiny world’s surface.

The image resolution in the pictures is detailed at being approximately 0.8 miles (1.3 kilometers) per pixel. The bright features on the surface of Ceres have fascinated scientists for some time. Image Credit: JPL / NASA

On Saturday, May 9, Dawn activated its ion engine to direct the spacecraft closer to the surface of Ceres so that it can begin its second planned mapping orbit. If everything goes as advertised, the spacecraft will enter this orbit on June 6 where it will complete an orbit once every three days at an altitude of some 2,700 miles (4,400 kilometers).

This is three times closer than its previous orbit.

This will mark Dawn’s survey orbit phase of its mission which should see Ceres’ surface mapped in precise detail.

It is hoped that the information gleaned from this data will provide a better understanding of the processes behind Ceres’ formation as well as whether it is still active geologically.

Dawn was launched on Sept. 27, 2007, atop a United Launch Alliance Delta II rocket from Cape Canaveral’s Launch Complex 17B. Dawn’s first destination was the asteroid Vesta; it entered orbit above the asteroid on July 16, 2011, and had remained there for more than a year, departing on Sept. 5, 2012.

Some have speculated that the bright spots are from the sun’s reflection on the surface. If the videos are real then would not the “glow” shift and change as the orbit continues? It appears to stay the same. Is that true?

Yes, yes, we all wish it was an alien city but it is ice.

Just ice. Which may be disappointing to UFO/conspiracy nuts.

I am happy with ice.

John is right. If this was ice you would expect to see a reflection when it is full on but not when it just appears from the left and disappears on the right. It would if it were an ice mountain since you would then get reflection off the sides.
The reflection theory does not make sense – simple optics