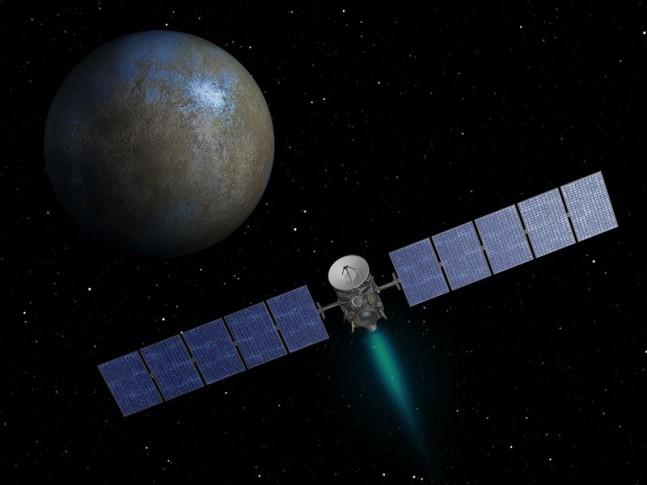 Two hundred and fourteen years ago, on Jan. 1 1801, the discovery of a faint celestial body set the stage for one of the biggest arguments in astronomy — planetary classification. Ceres, an asteroid the size of Texas, was known as the solar system’s largest rock for nearly two centuries. Until 2006, when a debate on the planetary status of Pluto called for a reclassification of Ceres to dwarf planet status. NASA launched Dawn shortly after in 2007, with a goal of further investigating this enigmatic world. The spacecraft has now begun its approach phase, and is expected to enter into orbit around Ceres in March.

NASA’s Dawn spacecraft launched atop a United Launch Alliance (ULA ) Delta II rocket from Space Launch Complex 17-B at NASA’s Kennedy Space Center on Sept. 27, 2007, kicking off the start of a seven year trek across the solar system.

Its mission: explore the asteroid belt and help unlock the secrets of the early solar system. Researchers had two targets picked out for the probe, and asteroid named Vesta and a dwarf planet named Ceres. Earlier this month, Dawn made headlines after capturing its first image of Ceres. Ceres as seen by the Hubble Space Telescope. Dawn will provide us with unprecedented views of this cosmic body. Image Credit: NASA/JPL-Caltech/Hubble

“Ceres is almost a complete mystery to us,” said Christopher Russell, principal investigator for the Dawn mission, based at the University of California, Los Angeles. “Ceres, unlike Vesta, has no meteorites linked to it to help reveal its secrets. All we can predict with confidence is that we will be surprised.”

Recently, Dawn emerged from solar conjunction, where the spacecraft is on the opposite side of the Sun, and as a result has very limited communications with Earth.

After Dawn regained its full ability to communicate back to Earth, the team back at mission control has been busy programming the maneuvers that the spacecraft will carry out in order to begin the approach phase the mission. Currently the spacecraft is approximately 400,000 miles (640,000 kilometers) from its target, and it is approaching at speeds of 450 miles (725 kilometers) per hour.

The Dawn spacecraft is unique in that it employs the use of ion propulsion. Dawn is equipped with two solar panels, spanning approximately 65 feet (19.7 meters) from tip to tip. the panels collect energy from the Sun, which then ionizes (accelerates the ions) the vehicle’s fuel — xenon — and accelerates the spacecraft.

Ion propulsion is more efficient than traditional chemical propulsion methods. This idea was first tested and deemed successful on NASA’s Deep Space 1 mission. However, this is the first mission where ion propulsion has been applied in the design and implementation of a dedicated spacecraft. According to NASA’s Jet Propulsion Laboratory (JPL), “In an ion propulsion engine, an electrical charge is applied to xenon gas, and charged metal grids accelerate the xenon particles out of the thruster. These particles push back on the thruster as they exit, creating a reaction force that propels the spacecraft. Dawn has now completed five years of accumulated thrust time, far more than any other spacecraft.”

“Orbiting both Vesta and Ceres would be truly impossible with conventional propulsion. Thanks to ion propulsion, we’re about to make history as the first spaceship ever to orbit two unexplored alien worlds,” said Marc Rayman, Dawn’s chief engineer and mission director, based at NASA’s Jet Propulsion Laboratory in Pasadena, California.

Current observations indicates that Vesta harbors a small amount of water in comparison to Ceres because it formed earlier, and was exposed to more radioactive material. Data shows that Ceres has a thick ice mantle, covering what could be a subsurface ocean beneath its icy exterior.

The next couple of months promise continually improving views of Ceres, prior to Dawn’s arrival. By the end of January, the spacecraft’s images and other data will be better than Hubble (BTH) quality, and best ever taken of the dwarf planet.

Be sure to stay tuned to SpaceFlight Insider for continuing developments as this mission progresses. Want to learn more about ion propulsion? Make sure to check out this video courtesy of NASA/JPL-Caltech.

Exciting times ahead, Dawn and Ceres, New Horizons and Pluto, what a tag team event for the year. Toss in Curiousity and what commercial crew will be doing and it adds up to a great year for space cadets.

Disappointing is a more accurate description; we should be sending humans to Ceres. https://ceresnotmars.wordpress.com/

So Ceres could be a future stop for space travelers in search of water? At least if there isn’t some sort of astronomical catastrophe that destroys humanity before that point.

Don Franck
Sure agree with that!
Plus Maybe a booster touches down on a barge and future years get real exciting!!!

If Ceres is only 600mi diameter, why does it appear so spherical in the photo?

What is the ‘Critical-Mass’ size for an object to become spherical (planetoid)?

It has sufficient mass that it’s gravity pulled into the most compact shape possible, a sphere.

And the fact that Ceres is large enough to assume a spherical shape is one of the reasons it is classified as a “dwarf planet” like Pluto.

I can not wait to see what Dawn reveals about Ceres in a few months! Thanks to ion propulsion technology, Dawn has been able to visit two asteroids and will allow other ambitious missions to fly throughout the solar system in the future (e.g. the upcoming ESA mission to Mercury). This is the culmination of decades of research into making ion propulsion practical with the first test flight in space taking place 50 years ago.

Saweet! I’m very excited about Ceres ever since Hubble detected a geyser going off on the dwarf. It could be another contender for life besides Mars, Europa, and Venus’ upper atmosphere.

that picture of Ceres is old where are the clear pictures of the planet? I WANT THE CLEAR PICTURES OF CERES, NOW… the planet ceres was mentioned in a “RUSH ” SONG

NASA should go beyond the ion engine and develop phased electrodynamic propulsion. http://youtu.be/6zh9abFF3ZE

Hi SpaceFlight Insider,
I would love to interview one of your people on Ohio Exopolitics Radio. We have about 1.8 million listeners. My program is on Studio B at 8pm Eastern.