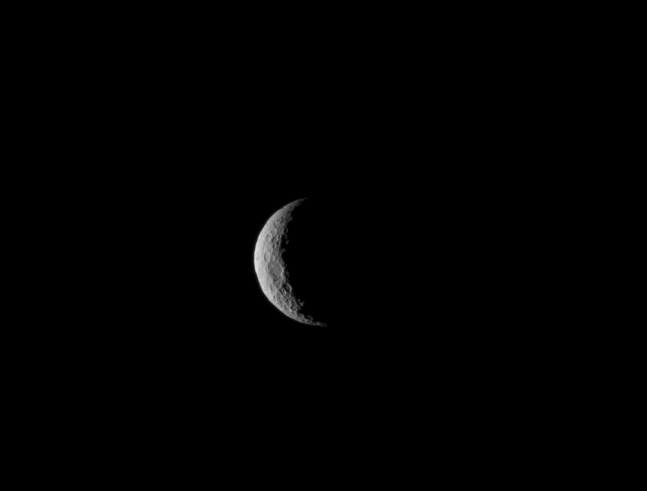 NASA's Dawn spacecraft made history by being the first to orbit a dwarf planet. Image Credit: NASA/JPL-Caltech

2015 has unofficially been dubbed the “Year of the Dwarf Planet” as NASA has two missions set to explore two different dwarf planets. At 4:39 a.m. PST (7:39 a.m. EST), NASA’s Dawn spacecraft made history as it casually slipped into orbit around the dwarf planet Ceres. The first spacecraft to successfully orbit a dwarf planet, Dawn was flying at an altitude of 38,000 miles above the surface and at speeds of 39,000 miles per hour.

In 1801, Ceres was first detected by Sicilian astronomer Father Giuseppe Piazzi. Initially labeled as a planet, Ceres was subsequently re-classified as an asteroid. Due to its spherical shape and planet-like qualities, Ceres was determined to be a dwarf planet in 2006, along with Pluto and Eris. Graphic showing the size differences between Vesta and other asteroids located within the main belt. Ceres is much larger than Vesta, accounting for 40 percent of the mass of the asteroid belt. Image Credit: NASA/JPL-Caltech

“Since its discovery in 1801, Ceres was known as a planet, then an asteroid and later a dwarf planet,” said Marc Rayman, Dawn chief engineer and mission director at JPL. “Now, after a journey of 3.1 billion miles (4.9 billion kilometers) and 7.5 years, Dawn calls Ceres, home.”

The Dawn mission is not your usual NASA acronym, but in fact named for the mission’s purpose — to discover the secrets of the dawn of our Solar System. Launched almost eight years ago, in Sept. 2007, Dawn first explored the giant asteroid Vesta from 2011 to 2012. During those 14 months, the probe captured unprecedented images and data. Vesta and Ceres both orbit the Sun in the main asteroid belt, between Mars and Jupiter.

“Both Vesta and Ceres were on their way to becoming planets, but their development was interrupted by the gravity of Jupiter,” said Carol Raymond, deputy project scientist at JPL. “These two bodies are like fossils from the dawn of the Solar System, and they shed light on its origins.” The Dawn mission will reveal the secrets of the largest unexplored world in the inner Solar System. Officially labeled a “dwarf planet”, researchers more often refer to Ceres and even Vesta as “proto-planets”, or fledgling planets whose development was hindered by the immense gravity of neighboring Jupiter.

“By studying Vesta and Ceres, we will gain a better understanding of the formation of our Solar System, especially the terrestrial planets and most importantly the Earth,” said Raymond. “These bodies are samples of the building blocks that have formed Venus, Earth and Mars. Vesta-like bodies are believed to have contributed heavily to the core of our planet, and Ceres-like bodies may have provided our water.”

Ceres has a lower density than typical rocky planets, indicating the presence of a possible ice layer. Scientists are expecting to discover the interior structure of Ceres. Data indicates there may have once been a subsurface ocean of liquid water, and researchers hope Ceres’ instruments will confirm this. Currently Dawn is orbiting the dark side of Ceres and has entered into a communications blackout period. The first of four planned science orbits is slated to being on April 23 and no new images from the spacecraft are expected before April 10. At this time the spacecraft will orbit Ceres at a distance of 8,400 miles before spiraling down until it makes its closest approach at only 230 miles above the surface. During these specialized orbits, Dawn will use its suite of instruments to map geologic features, elemental compounds, and even Ceres’ gravitational field.

Due to its ion propulsion system, Dawn can orbit Ceres indefinitely; however, the spacecraft has a limited amount of hydrazine used for attitude control. Dawn has a large enough supply to carry out its 16-month primary mission, but how much beyond that is yet to be determined.

Nice article, Amy. Nice web site. Readers should imagine how tenuous the orbit around Ceres is. Just the slightest nudge at this time would send it out of Ceres orbit and into only Solar orbit. The difference being nothing more than about the force of one foot thrust while on a skateboard to continue rolling down the street. Many days will be needed by the ion engine thrust. The thrust from the engines is equivalent to the force of gravity from one sheet of paper resting in the palm of your hand,