MESSENGER mission to end this month with crash into Mercury 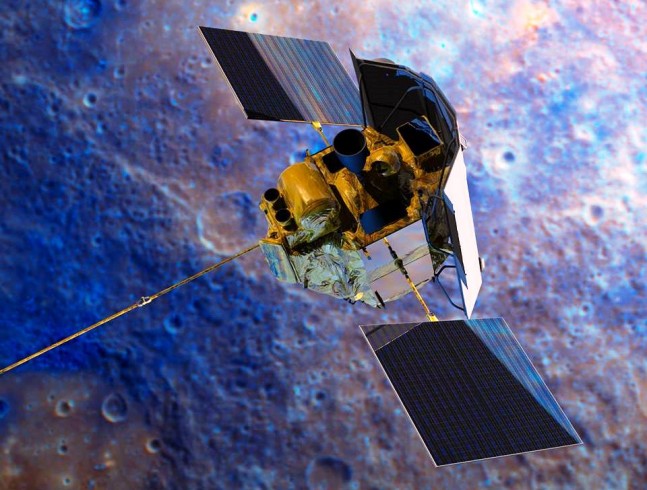 After some 3,922 days in space, NASA’s MErcury Surface, Space ENvironment, GEochemistry, and Ranging (MESSENGER) spacecraft will run out of propellant and crash into the surface of Mercury, ending a successful mission to study the chemical composition, geology, and magnetic field of the planet closest to the Sun.

Given that in Roman mythology Mercury was the messenger of the gods, the probe’s name is a not-too-subtle nod to the robotic surveyor’s primary target. MESSENGER weighs in at around 485 kilograms (1,069 lb) and is the first NASA craft to orbit Mercury. The spacecraft was launched aboard a Delta II rocket on August 3, 2004, to study Mercury’s composition, geology, and magnetic field. MESSENGER will complete its successful study of Mercury on April 30 with a crash into the surface. Image Credit: NASA

The spacecraft ran out of liquid hydrazine propellant on April 6, 2015. However, system engineers figured out how to perform a few final maneuvers using the gaseous helium originally used as a pressurizer in the tanks. That helium supply will run out on April 24, 2015.

“[At that point], we will finally declare MESSENGER as out of propellant,” said Mission System Engineer Daniel O’Shaughnessy.

MESSENGER is expected to crash into Mercury at 19:25 UTC on April 30, 2015. Even this last act is expected to reveal information about the surface of the rocky world. Scientists will study the crater size created when the 1,069 pound (485 kg) probe crashes into the surface at 8,700 mph (14,000 km/h), leaving a crater that scientists estimate will be about 52 feet (16 meters) across.

“MESSENGER had to survive heating from the Sun, heating from the dayside of Mercury, and the harsh radiation environment in the inner heliosphere, and the clearest demonstration that our innovative engineers were up to the task has been the spacecraft’s longevity in one of the toughest neighborhoods in our Solar System,” said MESSENGER principal investigator Sean Solomon, director of Columbia University’s Lamont-Doherty Earth Observatory. “Moreover, all of the instruments that we selected nearly two decades ago have proven their worth and have yielded an amazing series of discoveries about the innermost planet.” Magnetic field observations by the MESSENGER spacecraft in orbit about Mercury revealed flow of electric current from the magnetosphere to low altitudes along magnetic field lines. Image Credit: NASA / JHAPL

“Although Mercury is one of Earth’s nearest planetary neighbors, astonishingly little was known when we set out,” Solomon continued. “MESSENGER has at last brought Mercury up to the level of understanding of its sister planets in the inner Solar System. Of course, the more we learn, the more new questions we can ask, and there are ample reasons to return to Mercury with new missions.”

In a briefing at NASA Headquarters held on Apr. 16, MESSENGER scientists and engineers ticked off the top science findings and technological innovations from the mission. Near the top of the list of science accomplishments is having provided compelling support for the hypothesis that Mercury harbors abundant water ice and other frozen volatile materials in its permanently shadowed polar craters.

“The water now stored in ice deposits in the permanently shadowed floors of impact craters at Mercury’s poles most likely was delivered to the innermost planet by the impacts of comets and volatile-rich asteroids,” said Solomon. “Those same impacts also likely delivered the material in the dark layer discovered by MESSENGER to cover most polar deposits and interpreted, on the basis of its sublimation temperature and low reflectance, to be carbonaceous. By this interpretation, Mercury’s polar regions serve as a witness plate to the delivery to the inner Solar System of water and organic compounds from the outer Solar System, a process that much earlier may have led to prebiotic chemical synthesis and the origin of life on Earth. MESSENGER’s findings have made Mercury an even more interesting body for future exploration than before our mission.” Mercury’s magnetosphere is highly dynamic because of the planet’s small magnetic field and proximity to the Sun. Image Credit: NASA / JHAPL

“The front side of the sunshade routinely experiences temperatures in excess of 300 degrees Celsius (570 degrees Fahrenheit), whereas the majority of components in its shadow routinely operate near room temperature (20 degrees Celsius or 68 degrees Fahrenheit),” Winters explained. “The sunshade is extremely effective at isolating most of the vehicle from the Sun’s radiation, but reflected infrared radiation from Mercury greatly influences the temperatures of MESSENGER’s components behind the sunshade. The influence of Mercury is effectively managed with careful selection of vehicle orientation, to balance heating across the spacecraft, as well as an intricate system of heat pipes and radiators.” Mercury is a tiny, rocky world, and is the planet that orbits closest to the Sun. Photo Credit: NASA / Johns Hopkins Applied Physics Laboratory

Humanity will finally “touch” the inner most planet….incredible! What an age of planetary exploration we live in!

This is so interesting!!! I am a Taurus born on may 13 2003 and my main planet is Mercury!!! I was also born on Debby Ryan’s birthday and Robert Pattison and Stevie Wonder!!! Look It Up On Google!!! DARE YOU! P.S Telling the truth!!!!!