MAVEN spacecraft to be moved to a lower Mars orbit

NASA’s Mars Atmosphere and Volatile EvolutioN (MAVEN) orbiter, which has been studying the Martian atmosphere for more than four years, is being prepared to act as a telecommunication relay with the Mars 2020 rover, which is slated to launch next year and land on the Red Planet in February 2021.

Following a November 2013 launch, MAVEN entered Martian orbit in September 2014 with the goal of determining how ancient Mars lost its atmosphere, transforming the planet from a warm, wet, habitable world to a cold, dry, lifeless one. The planet still has surface features that resemble riverbeds through which liquid water could have once flowed.

Scientists believe ancient weakening of Mars’ magnetic field, which occurred after the planet’s core cooled, enabled the solar wind to strip away its atmosphere as well as its water and volatile compounds. 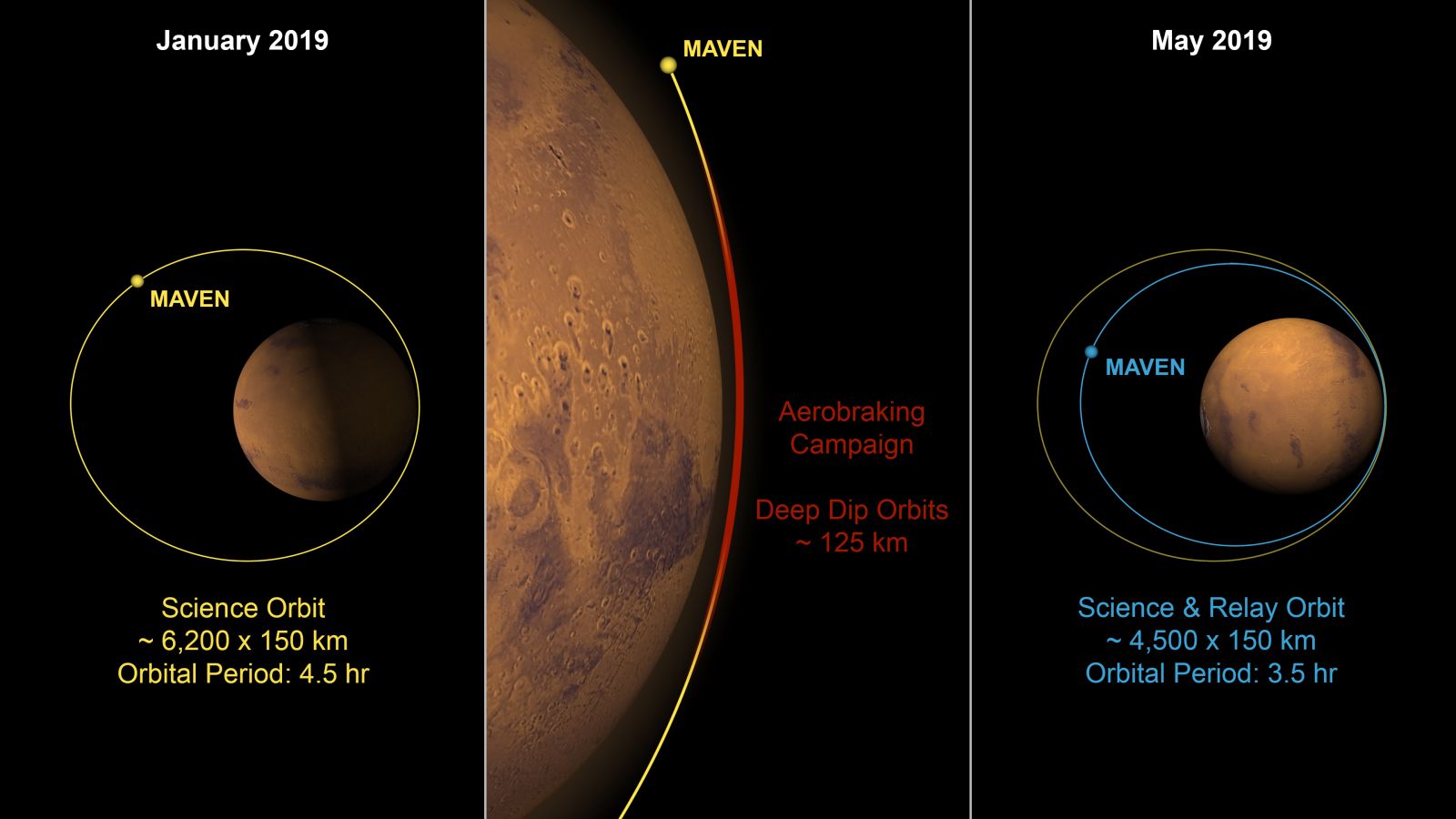 Equipped with eight science instruments, MAVEN was assigned four science goals—to study the role played by the loss of volatile compounds from Mars’ atmosphere into space over time; to study the planet’s current ionosphere, upper atmosphere, and interaction with the solar wind; to determine the current escape rates of neutral gases and ions; and to constrain the ratios of stable isotopes in Mars’ atmosphere.

A key finding by the probe, announced in November 2015, is that solar storms accelerate Mars’ atmosphere loss. Between 4.2 and 3.7 billion years ago, as much as 99 percent of the Red Planet’s atmosphere was lost, triggering a process that could be considered the opposite of climate change on Earth today. Ancient Mars’ atmosphere had been dominated by carbon dioxide, a greenhouse gas that kept the planet’s surface warm enough to support liquid water. Once most of that carbon dioxide was stripped away, Mars became cold and dry.

As water evaporates from Mars’ atmosphere, solar radiation separates its molecules into hydrogen and oxygen. Due to its being the lightest element, the hydrogen then rises into the planet’s upper atmosphere, from where it is often lost to space. After measuring this process over an entire Martian year, MAVEN discovered Mars’ atmospheric escape rate is highest when the planet is closest to the Sun and is lowest when Mars is at its most distant orbital point.

MAVEN also found charged metal atoms in Mars’ upper atmosphere, which could be the result of debris impacting the planet and possibly altering its climate in the process.

A 2018 discovery of two unusual Martian auroras informed scientists that the solar wind is not completely diverted around the Red Planet, allowing protons to “steal” electrons from the cloud of hydrogen surrounding the planet, then enter its atmosphere as neutral atoms, producing the ultraviolet light that makes up auroras. 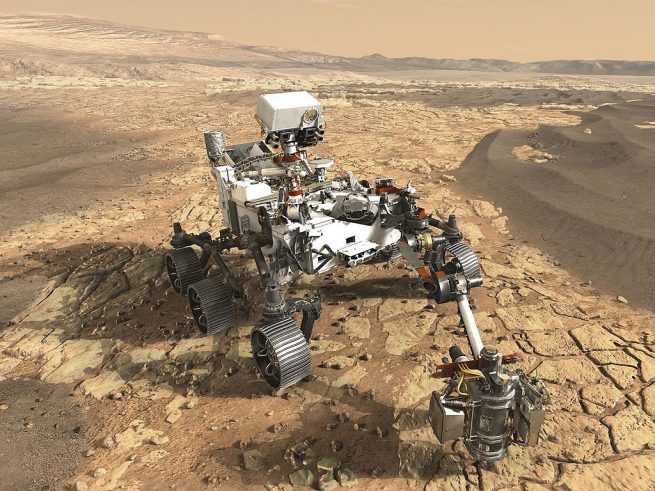 An artist’s depiction of the Mars 2020 rover on the surface of the Red Planet. Image Credit: NASA / JPL Caltech

Because MAVEN is equipped with an ultra-high-frequency radio transceiver, it has also been used to transmit data between Martian rovers and landers and Earth.

In preparation for relaying communication between the Mars 2020 rover and Earth, mission engineers have begun the process of reducing MAVEN’s elliptical orbit from its current position 3,850 miles (6,200 kilometers) above the Red Planet’s surface to 2,800 miles (4,500 kilometers). The closer orbit should enhance its communication capabilities with the rover and increase its number of orbits from 5.3 to 6.8 per Earth day.

In order to preserve fuel, mission engineers have chosen to use a technique known as aerobraking to bring MAVEN into the closer orbit. This technique involves lowering the orbiter into the upper Martian atmosphere via a series of deep dives that briefly take it as close as 78 miles (125 kilometers) above the surface. With each dive, Mars’ atmospheric drag slows the spacecraft down. Within the next two-and-a-half months, MAVEN is expected to descend to a lower orbit approximately 360 times, with each passage slowing it more.

“The effect is the same as if we fired our thrusters a little bit on every orbit, but this way, we use very little fuel,” said MAVEN Principal Investigator Bruce Jakosky of the University of Colorado at Boulder.

Aerobraking has been used in the past to move MAVEN into the same closer orbit to enable measurements of Mars’ atmosphere. MAVEN’s discovery that the solar wind has been stripping away Mars’ atmosphere was made during one such orbital descent.

With sufficient fuel to function through 2030, MAVEN is expected to be doing science and acting as a communications relay with Martian rovers and landers for the foreseeable future.