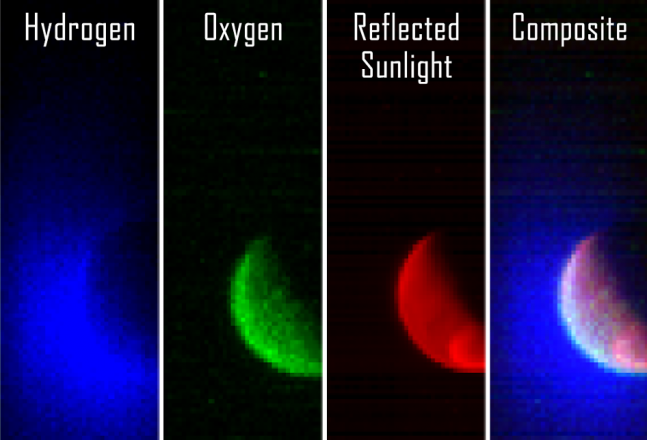 MAVEN has sent us its first observations of the Martian atmosphere. Image Credit: NASA

NASA’s Mars Atmosphere and Volatile EvolutioN (MAVEN ) spacecraft has beamed back its first observations of the red planet’s extended upper atmosphere. The spacecraft returned these findings within 24 hours of arriving in orbit above the Red Planet. The Martian satellite was launched from Cape Canaveral Air Force Station’s Space Launch Complex 41 (SLC-41) atop a United Launch Alliance Atlas V 401 rocket in November of 2013.

After inserting itself into orbit around Mars late Sunday evening, the spacecraft has already returned its first data observations. The Imaging Ultraviolet Spectrograph (IUVS) instrument collected these false-color images about eight hours after orbital insertion.

The image was captured in three ultraviolet wavelengths and at an altitude of 22,680 miles. The blue regions show how ultraviolet light from the Sun scatters due to atomic hydrogen gas within clouds that extend up to thousands of miles above the planet’s surface. The green areas illustrate a very different wavelength of ultraviolet light, also sunlight, this time reflecting off of atomic oxygen, and highlighting a smaller oxygen cloud. Lastly, the red regions point to ultraviolet sunlight reflected off of the planet’s surface. Researchers suspect the bright spot in the lower right corner is light that has reflected off of polar ice or clouds.

Mars’ gravity has a tight hold on oxygen gas, and allows the lighter, hydrogen gas to extend to higher altitudes. The presence of these gases is due to the breakdown of water and carbon dioxide in the Martian atmosphere. MAVEN is expected to return data like this throughout its one-Earth-year science mission. The data will be used to analyze ow Mars lost its atmospheric hydrogen and oxygen. Observations like these are vital to our understanding of the processes by which Mars lost its water.