MAVEN goes for a dip 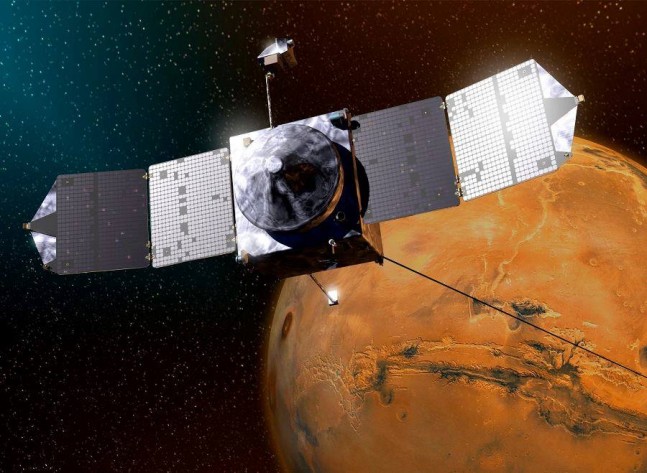 NASA’s Mars Atmosphere and Volatile EvolutioN (MAVEN) orbiter is the first spacecraft dedicated to studying the tenuous Martian atmosphere. The spacecraft recently completed the first of five planned dips into the lowest section of the upper Martian atmosphere, taking samples and relaying them back home to NASA.

Bruce Jakosky, MAVEN’s principal investigator says, “During normal science mapping, we make measurements between an altitude of about 93 miles and 3,853 miles (150 km and 6,200 km)  above the surface. During the deep-dip campaigns, we lower the lowest altitude in the orbit, known as periapsis, to about 78 miles (125 km) which allows us to take measurements throughout the entire upper atmosphere.”

Jakosky and his team operate MAVEN from the University of Colorado’s Laboratory for Atmospheric and Space Physics located in Boulder, Colorado.

On Feb. 10, team engineers instructed the craft to perform three burns by firing on-board rocket thrusters. They had concluded that “walking” the spacecraft down was the best way to proceed. A single burn may have sent the craft too deep into the atmosphere. MAVEN officially began its science mission on Nov. 16, 2014 and aims to determine what happened to Mars’ atmosphere. Image Credit: NASA/JPL-Caltech

Even though the atmosphere is still very thin at 78 miles (125 km) it still puts an enormous drag on the MAVEN spacecraft. If the orbiter hits a particularly dense area of atmosphere, it could cause frictional heating and damage the satellite. Mission operators must carefully control how and when the spacecraft performs these dips.

“Although we changed the altitude of the spacecraft, we actually aimed at a certain atmospheric density,” said Jakosky. “We wanted to go as deep as we can without putting the spacecraft or instruments at risk.”

When the sampling was concluded, operators instructed MAVEN to perform a pair of maneuvers to return the craft to its normal operating altitudes. Operations for this dip concluded on Feb. 18. The information captured during this sample collection will be analyzed over the coming weeks. When combined with the data from the other planned sample runs and the regular mapping mission, it is hoped that a better understanding of the Martian atmosphere will emerge. Artist concept depicting MAVEN and the constituent molecules in Mars’ upper atmosphere it will analyze and observe. Image Credit: NASA/JPL-Caltech

One of the key studies scientists will be looking at is the methods gases use to escape from the upper atmosphere of Mars and into space. How that outflow affects the lower atmospheric strata and its impact on the historical Martian climate is something scientists hope to learn more about using these studies.

While MAVEN’s principle investigation team is based at the University of Colorado’s Laboratory of Applied Physics, it is managed through NASA’s Goddard Space Flight Center in Greenbelt, Maryland. Several other universities assist with the program. The Jet Propulsion Laboratory in Pasadena, California, provides Deep Space Network support. The University of California at Berkeley’s Space Sciences Laboratory also provided four science instruments for the mission.