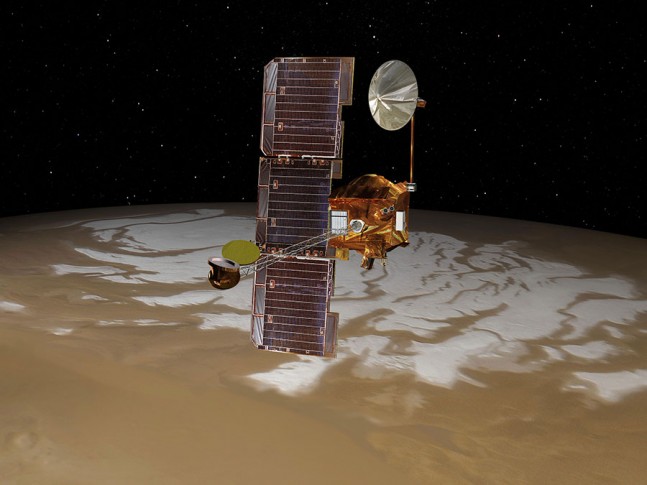 Artist's rendering of the Mars Odyssey spacecraft in orbit above the surface of the Red Planet. Image Credit: NASA

NASA’s Mars Odyssey spacecraft will reach a major milestone on Tuesday, June 23, when it will make its 60,000th orbit of Mars. The orbiter, which is NASA’s longest-operating spacecraft at the Red Planet, arrived in orbit above the flash-frozen world in 2001. The satellite was named Odyssey in honor of Arthur C. Clarke’s science fiction novel 2001: A Space Odyssey.

During its nearly 14 years in orbit, Odyssey has discovered water ice just beneath the surface of Mars. The spacecraft continues to contribute to planetary science and also serves as a vital communications relay for NASA’s Mars rovers exploring far below in the Martian dust.

“This orbital milestone is an opportunity to celebrate Odyssey’s many achievements,” said Jim Green, NASA’s director of Planetary Science. “Odyssey will continue to help lay a foundation for the first humans to Mars in the 2030s through NASA’s Journey to Mars initiative.” Gale Crater, home to NASA’s Curiosity Mars rover, shows a new face in this image made using data from the THEMIS camera on NASA’s Mars Odyssey orbiter. The colors come from an image processing method that identifies mineral differences in surface materials and displays them in false colors. Image Credit: NASA/JPL-Caltech/Arizona State University

Odyssey traveled 286 million miles to reach Mars and has since traversed nearly 888 million miles in orbit. Despite its high mileage and long service, the spacecraft is still considered to be in good condition by the team who operate her.

“The spacecraft is in good health, with all subsystems functional and with enough propellant for about 10 more years,” said David Lehman, project manager for the Mars Odyssey at NASA’s Jet Propulsion Laboratory (JPL) in Pasadena, California.

Odyssey began making important discoveries early in its two-year primary mission, with gamma-ray and neutron measurements that indicated the presence of sub-surface water ice at high latitudes on Mars. During its lengthy extended mission, the spacecraft also completed the highest-resolution global map of the fourth planet from the Sun and observed seasonal and year-by-year changes on the planet’s surface, such as the freezing and thawing of carbon dioxide.

Odyssey has also contributed to planning of future human missions to Mars by monitoring radiation in the environment around the planet using the Mars Radiation Environment Experiment (MARIE ) which was developed at NASA’s Johnson Space Center in Houston, Texas.

Odyssey is currently in the process of adjusting its orbit in order to pass over Martian terrain lit by early morning sunlight rather than afternoon light. The shift began in 2012, was accelerated in 2014, and will be completed this November with a maneuver that will lock-in the orbit timing so that each pass over the equator occurs at the same time of day.

“Upcoming observations will focus on what is happening in the Martian atmosphere in the morning, such as clouds, hazes and fogs, and on frosts on the surface that burn off by later in the day,” said Jeffrey Plaut, Odyssey project scientist at JPL.

While acting as a communications relay for NASA’s Mars rovers, Odyssey  has transmitted to Earth over 90 percent of the data received from the Opportunity rover. In the future, Odyssey will also relay data for NASA and European Space Agency (ESA ) landers that will arrive at Mars in 2016.