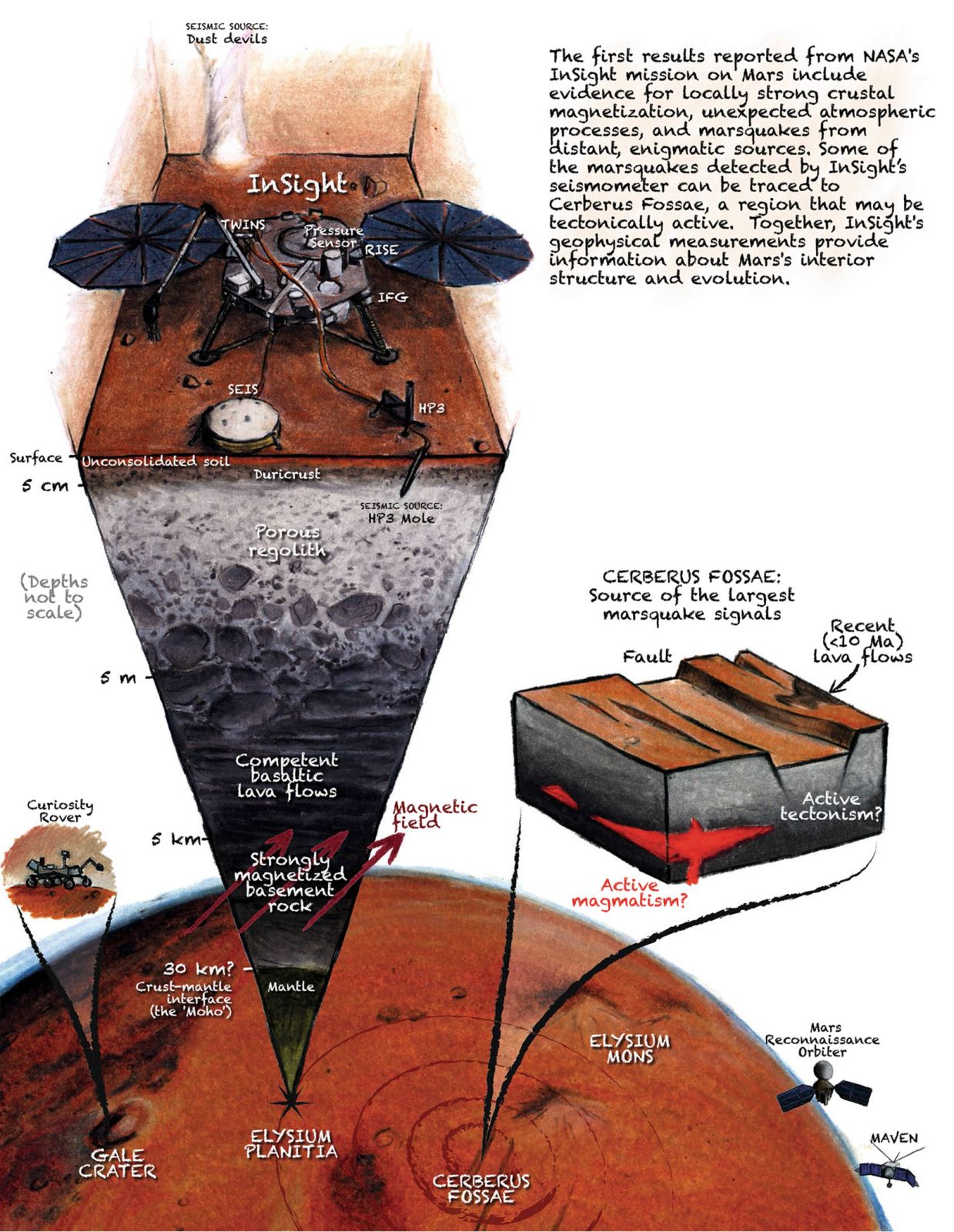 Various missions to Mars have confirmed that the now dry, cold planet was wetter and warmer during the solar system’s earliest days, making the ancient planet more conducive to harboring microbial life. Significant weakening of its magnetic field 4.2 billion years ago left the planet without protection from the solar wind, causing most of its atmosphere to be lost into space.

The first probe to measure seismic readings on another planet, InSight, which landed on Mars in November 2018, is equipped with a magnetic sensor. That sensor’s initial purpose was to filter out magnetic interference during data collection. However, mission scientists found they could use the sensor to measure the strength of what is left of Mars’ magnetic field.

Researchers have known for some time that Mars has residual magnetic activity, which has been detected by various spacecraft in orbit above the planet’s atmosphere. However, analysis of InSight‘s data taken from the surface indicates Mars’ remaining magnetic field is 10 times stronger than that measured by these spacecraft.

“One of the big unknowns from previous satellite missions was what the magnetization looked like over small areas. By placing the first magnetic sensor at the surface, we have gained valuable new clues about the interior structure and upper atmosphere of Mars that will help us understand how it–and other planets like it–formed,” said Catherine Johnson, senior scientist at the Planetary Science Institute (PSI) and professor of Earth, Ocean, and Atmospheric Sciences at the University of British Columbia.

“The ground-level data gave us a much more sensitive picture of magnetization over smaller areas and where it’s coming from. In addition to showing that the magnetic field at the landing site was 10 times stronger than the satellites anticipated, the data implied it was coming from nearby sources,” she added. 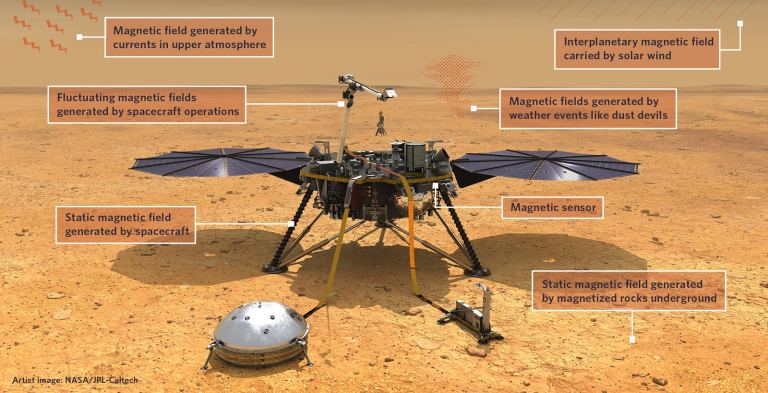 The Mars InSight lander and its science instruments, including the magnetic sensor that measured its magnetic field. Image Credit: NASA/JPL-Caltech

While Earth’s magnetic field is generated by convection in its molten core, Mars has no such core, leading scientists to question the source of its unexpectedly strong magnetic field. They suspect the residual magnetic field comes from old rocks several hundred feet below the Martian surface. Rocks on or close to Mars’ surface are young and have never been exposed to this magnetic field.

Also detected by the magnetic sensor are fluctuations in the Red Planet’s magnetic field between day and night.

Mission scientists hope to combine data collected by InSight with that from other Mars missions, both past and future, to better understand Mars’ geological history and internal structure.

Although it is stronger than previously suspected, Mars’ magnetic field is nowhere near the strength of Earth’s and is not powerful enough to protect the planet from the solar wind. Because of this, mission scientists have been able to study the interaction between the solar wind and the Martian surface.

“Because all of our previous observations of Mars have been from the top of its atmosphere or even higher altitudes, we didn’t know whether disturbances in solar wind would propagate to the surface. That’s an important thing to understand for future astronaut missions to Mars,” Johnson emphasized.

She is the lead author on a study about these findings recently published in the journal Nature Geosciences.