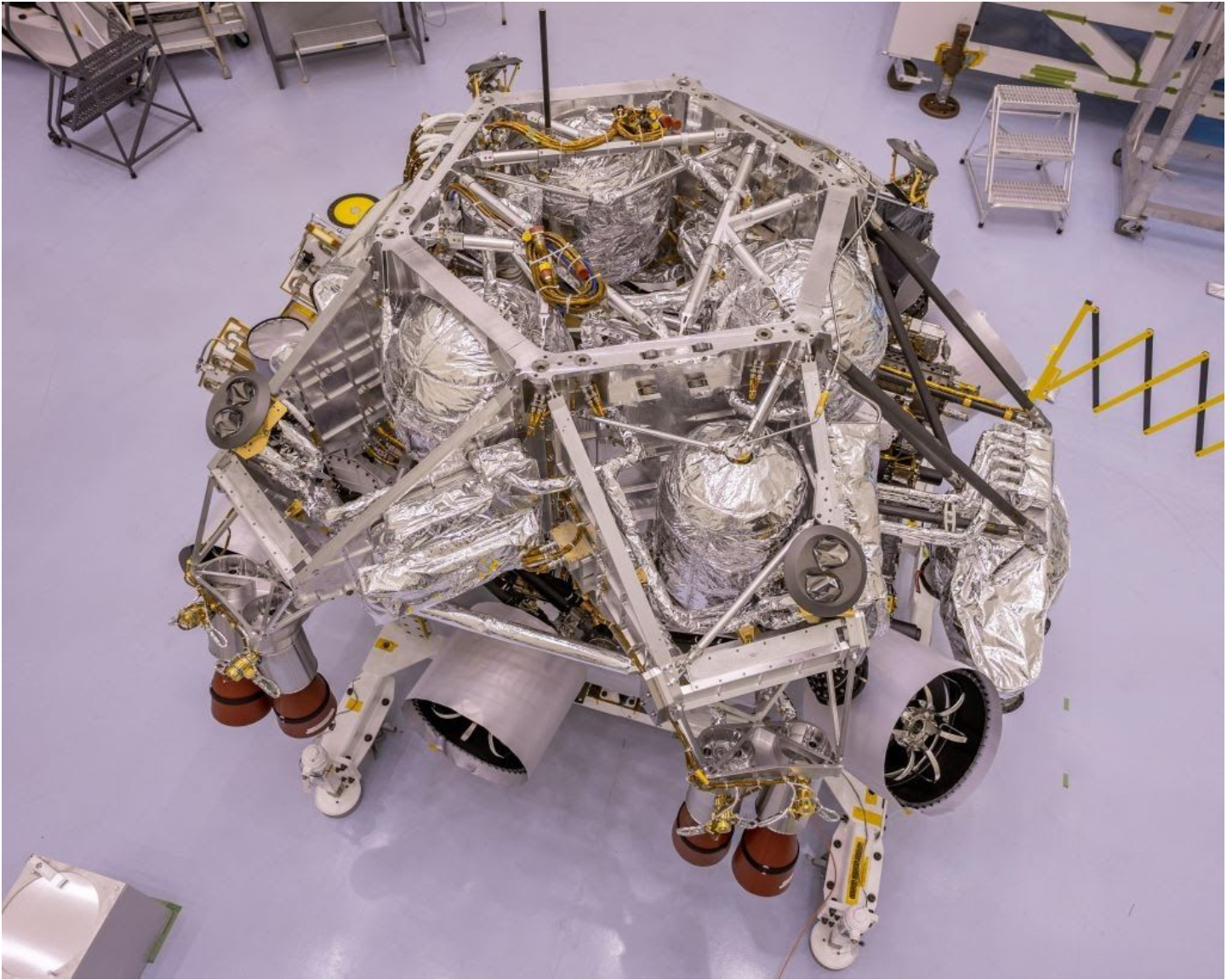 This image of the rocket-powered descent stage sitting on top of NASA’s Perseverance rover was taken in a clean room at Kennedy Space Center on April 29, 2020. The integration of the two spacecraft was the first step in stacking the mission’s major components into the configuration they will be in while sitting atop of the Atlas V rocket. (Image: NASA/JPL-Caltech)

The review occurred on Wednesday, July 22 – just 90 days after engineers began stacking the Perseverance Mars Rover on April 23, integrating the car-size rover and its associated hardware with the descent stage, configured as required to lower the rover to the Martian surface. 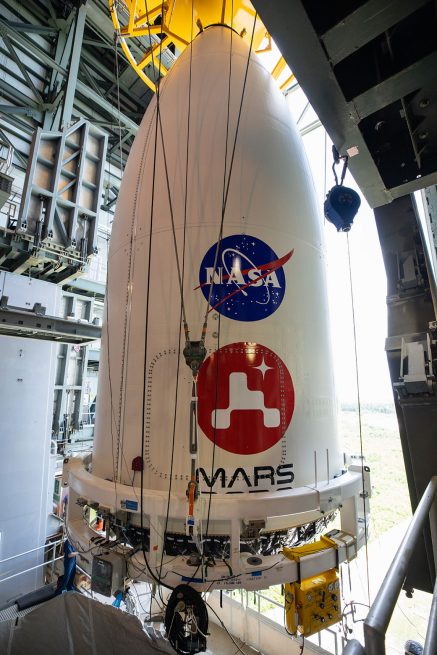 The payload fairing, or nose cone, containing NASA’s Mars 2020 Perseverance rover is maneuvered into place atop the Atlas V rocket that will hurl it toward Mars. The image was taken on July 7, 2020, inside the Vertical Integration Facility at Cape Canaveral Air Force Station’s Space Launch Complex 41 in Florida. Image: NASA/KSC

Stacking continued on April 29, as the rover-sky crane duo was attached to the back shell of the conical structure which contains the mission’s parachute system. This (along with heat shields) help protect the spacecraft during the mission’s trip through the fiery Martian atmosphere. “Attaching the rover to the descent stage is a major milestone for the team because these are the first spacecraft components to come together for launch, and they will be the last to separate when we reach Mars,” David Gruel, the Perseverance rover assembly, test, and launch operations manager at NASA’s Jet Propulsion Laboratory (JPL) in Pasadena, California, said in a statement at the time.

A United Launch Alliance (ULA) Atlas V rocket will launch the Mars 2020 mission, flying in the 541 configuration. This features a 5 meter payload fairing, 4 solid rocket boosters and one single Centaur upper stage motor. The Centaur upper stage can deliver payloads to their required destinations and has sent spacecraft to every planet in our solar system.

Once on the Martian surface, the Perseverance Mars Rover will explore the Jezero Crater, a lake and delta area, studying the planet’s habitability, seeking signs of past microbial life, collecting and storing samples of selected rock and soil and preparing for future human missions. It is also carrying on-board, the Ingenuity helicopter, which will be used to test powered flight on Mars.

Having worked for years to prepare for the upcoming launch and following groundbreaking science, teams are ticking the final boxes off before the big day. “We’re pleased to be passing another milestone, with the completion of the Flight Readiness Review,” said Matt Wallace, deputy project manager for the mission at NASA’s Jet Propulsion Laboratory (JPL) in Southern California, “but we’ll keep our heads down through the final prelaunch activities and the opening of the launch window next week, until we’re certain this spacecraft is safely on its way. Mars is a tough customer, and we don’t take anything for granted.”

On Monday, July 27, the spacecraft and launch teams will undergo one last launch readiness review , required to obtain the final approval to launch. The agency will later hold a preflight news conference, airing live on NASA Television and the agency’s website later that afternoon at approximately 1pm EDT.

The Perseverance #Mars2020 mission will be the 85th to fly atop a ULA Atlas V since the vehicle’s inaugural launch in 2002, and is only the 7th to fly in the 541 configuration.