MarCO-B, one of the experimental Mars Cube One (MarCO) CubeSats, took these images as it approached Mars. Photo Credit: NASA/JPL-Caltech

Twin tiny satellites launched with NASA’s Mars InSight lander in May 2018 have been out of touch with mission controllers on Earth for slightly over a month.

Called Mars Cube One or MarCO for short, the mini-satellites, each approximately the size of a briefcase and nicknamed WALL-E and EVE after characters in a Pixar film, were the first tiny satellites launched into deep space.

Small satellites represent a new technology that is less expensive than standard-sized satellites and could potentially be used for very distant missions, including a possible robotic visit to the exoplanet orbiting Proxima Centauri, the star closest to the Solar System. 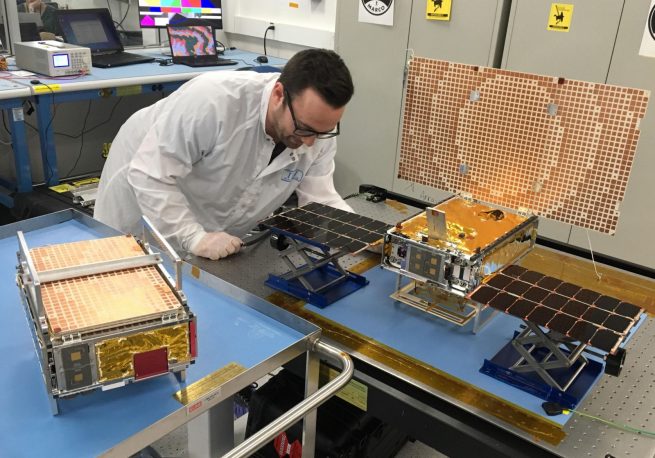 The MarCO CubeSats before being stowed and prepared for launch. Photo Credit: NASA

Placed into an elliptical solar orbit, both CubeSats, whose $18.5-million cost was funded by NASA’s Jet Propulsion Laboratory (JPL) in Pasadena, California, are now well past Mars.

Both WALL-E and EVE were built at JPL. NASA plans to repurpose some of the spare parts used in their construction, such as antennas, experimental radios, and propulsion systems, to build additional CubeSats scheduled to launch in the near future.

One important benefit of CubeSats is that each one carries its own navigation and communication systems.

In several months, the CubeSats’ elliptical orbits will bring them closer to the Sun. Mission scientists will then attempt to regain contact with them, but even if that fails, the MarCO mission is viewed as a success and a milestone in the use of this new, still-experimental technology.

“This mission was always about pushing the limits of miniaturized technology and seeing just how far it could take us,” said mission chief engineer Andy Klesh of JPL in a news release. “We’ve put a stake in the ground. Future CubeSats might go even farther.”

An artist’s rendering of the twin Mars Cube One spacecraft as they fly through deep space. Image Credit: NASA/JPL-Caltech

Mission scientists have several theories as to why the CubeSats lost contact. Both recharge their batteries by pointing their solar panels at the Sun. If the brightness sensors that keep them pointing at the Sun have malfunctioned, the batteries may be unable to recharge. The satellites are still receding from the Sun, and their greater distance requires more precision in aiming their antennas toward Earth.

Problems with attitude control, which involves the orientation of spacecraft in three-dimensional space so they directly point toward their targets, such as the Sun or Earth, could be causing both CubeSats to wobble, leaving them unable to receive commands or communicate. Additionally, one of WALL-E’s thrusters is known to be leaking.

The systems used for the MarCOs are produced by commercial companies and are likely compatible with various other types of CubeSats.

Jim Green, director of NASA’s Planetary Sciences Division, described the MarCo mission as “a demonstration of future potential capability” while MarCO program manager John Baker of JPL praised them as a technology affordable to private companies as well as to governments.