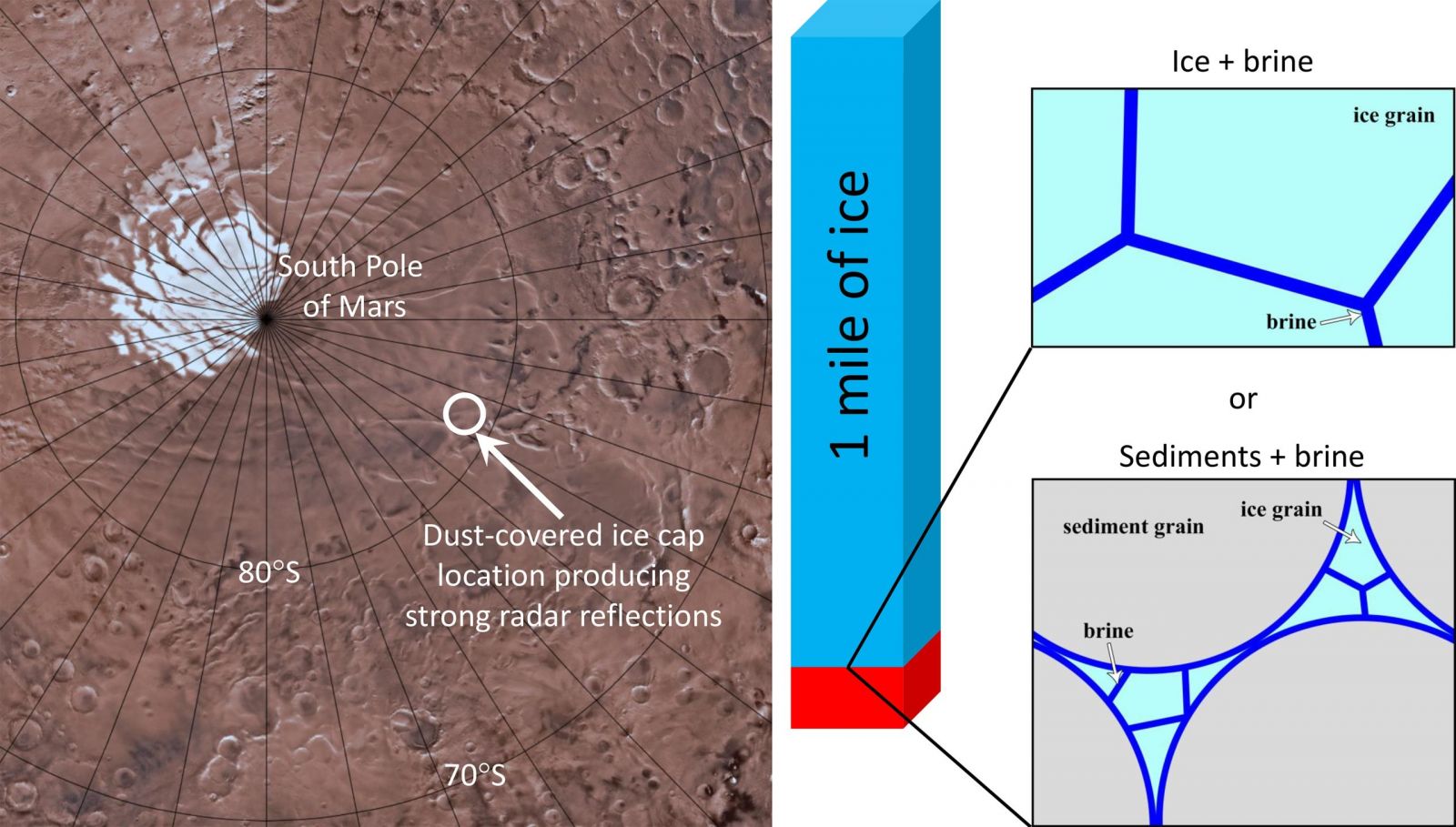 Left: Mars’ south polar cap, beneath which liquid water could be present in brines. Right: Possible combinations one mile below the polar cap. Credit: NASA/JPL-Caltech/USGS/SwRI

Bright reflections detected in 2018 by the Mars Advanced Radar for Subsurface and Ionosphere Sounding (MARSIS) radar instrument on the European Space Agency‘s (ESA) Mars Express orbiter could indicate the presence of liquid water lakes around 0.93 miles (1.5 kilometers) beneath Mars south polar ice cap, according to a study published in the journal Earth and Planetary Science Letters.

A team of researchers based at Roma Tre University in Italy studied the reflections of radio waves bounced back from Mars’ south polar surface to the instrument’s 130-foot antenna and determined the signals were too strong and bright to be generated by ice and rock. The latter produce only weak signals when radio waves are bounced off them.

The strength of the signal matched that produced by liquid water close to the surface. 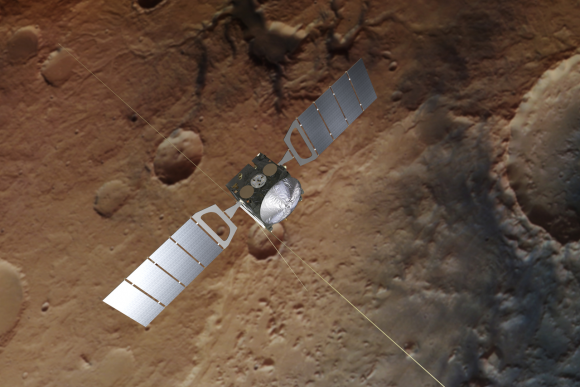 Liquid water can exist in temperatures far below water’s freezing point within salty brines or clay, as occurs beneath Earth’s poles. To support their conclusion, the researchers conducted laboratory simulations and reviewed existing data. They also consulted David Stillman of the Southwest Research Institute (SwRI), a geophysicist who specializes in studying substances in extremely cold temperatures.

“Lakes of liquid water actually exist beneath glaciers in Arctic and Antarctic regions, so we have Earth analogs for finding liquid water below ice,” Stillman said. “The exotic salts that we know exist on Mars have amazing ‘antifreeze’ properties allowing brines to remain liquid down to minus 103 degrees Fahrenheit. We studied these salts in our lab to understand how they would respond to radar.”

Ancient Mars did have liquid water on its surface, and subsurface water could be its remnants.

Because temperatures beneath Mars’ south polar cap are much colder than that at which water freezes, some scientists question the research team’s conclusion and attribute the bright radar signals to other substances, such as hydrated brines and clay.

In a separate paper published in the journal Geophysical Research Letters, Nathaniel Putzig of the Planetary Science Institute (PSI) said, “It is not necessary to invoke liquid water at the base of the polar cap to explain the results of the MARSIS observations. Alternatives include clays, some metallic minerals, and salty ice.”

To support the researchers, Stillman turned to a laboratory experiment in which he studied perchlorate brines similar to those known to exist beneath Mars’ south pole under a simulated Mars environment.

“My Italian colleagues reached out to see if my laboratory experiment data would support the presence of liquid water beneath the Martian ice cap,” Stillman said. “The research showed that we don’t have to have lakes of perchlorate and chloride brines, but that these brines could exist between the grains of ice or sediments and are enough to exhibit a strong, dielectric (insulating) response. This is similar to how seawater saturates grains of sand at the shoreline or how flavoring permeates a slushie but at minus 103 degrees Fahrenheit near the south pole of Mars.”

Even if liquid water is present beneath Mars’ south pole, the extremely cold temperatures make this region uninhabitable for life.