This composite image, derived from data collected by the Jovian Infrared Auroral Mapper or JIRAM instrument aboard NASA’s Juno mission to Jupiter, shows the central cyclone at the planet’s north pole and the eight cyclones that encircle it. Image Credit: NASA/JPL-Caltech/SwRI/ASI/INAF/JIRAM

Jupiter’s colorful belts and bands are connected to cylindrical jet streams that extend as far as 1,900 miles (3,000 km) through the giant planet’s atmosphere, according to data returned by NASA’s Juno orbiter.

The surprising depth of the planet’s jet streams is just one of several discoveries made by Juno, which are discussed in four separate papers scheduled for publication in the March 8 issue of the journal Nature.

In addition to descending deep into Jupiter’s atmosphere, the jet streams also last much longer than similar phenomena on Earth.

Juno has been in a polar orbit around the giant planet since July 2016 and has conducted ten science passes over the planet , flying as close as 2,200 miles (3,500 km) above its cloud tops, probing beneath them to find answers regarding Jupiter’s origin, structure, magnetosphere, and weather.

The probe will make its 11th science pass, known as perijove, on April 1.

By taking gravity measurements during these science passes, Juno has been able to ascertain the depths of the jet streams, which were unknown before the mission.

Jupiter’s eastward and westward jet streams, both of which flow deep within the planet, are asymmetrical north and south. Their depths are directly connected to the planet’s gravity because the deeper the jets run, the more massive they are. More mass results in a stronger gravity field.

Mission co-investigator Yohai Kaspi of the Weizmann Institute of Science in Rehovot, Israel, and lead author of the paper about Jupiter’s deep weather layer, said the planet’s belts and bands have been known to humanity since Galileo first observed them over 400 years ago, yet were never well understood.

“Until now, we only had a superficial understanding of them and have been able to relate these stripes to cloud features along Jupiter’s jets. Now, following the Juno gravity measurements, we know how deep the jets extend and what their structure is beneath the visible clouds. It’s like going from a 2-D picture to a 3D version in high definition.”

Mission scientists were surprised by both the mass and depth of Jupiter’s weather layer, which comprises about one percent of the planet’s total mass and is equivalent to three Earth masses.

Earth’s atmosphere makes up less than one millionth of its total mass, Kaspi stated. “The fact that Jupiter has such a massive region rotating in separate east-west bands is definitely a surprise.” 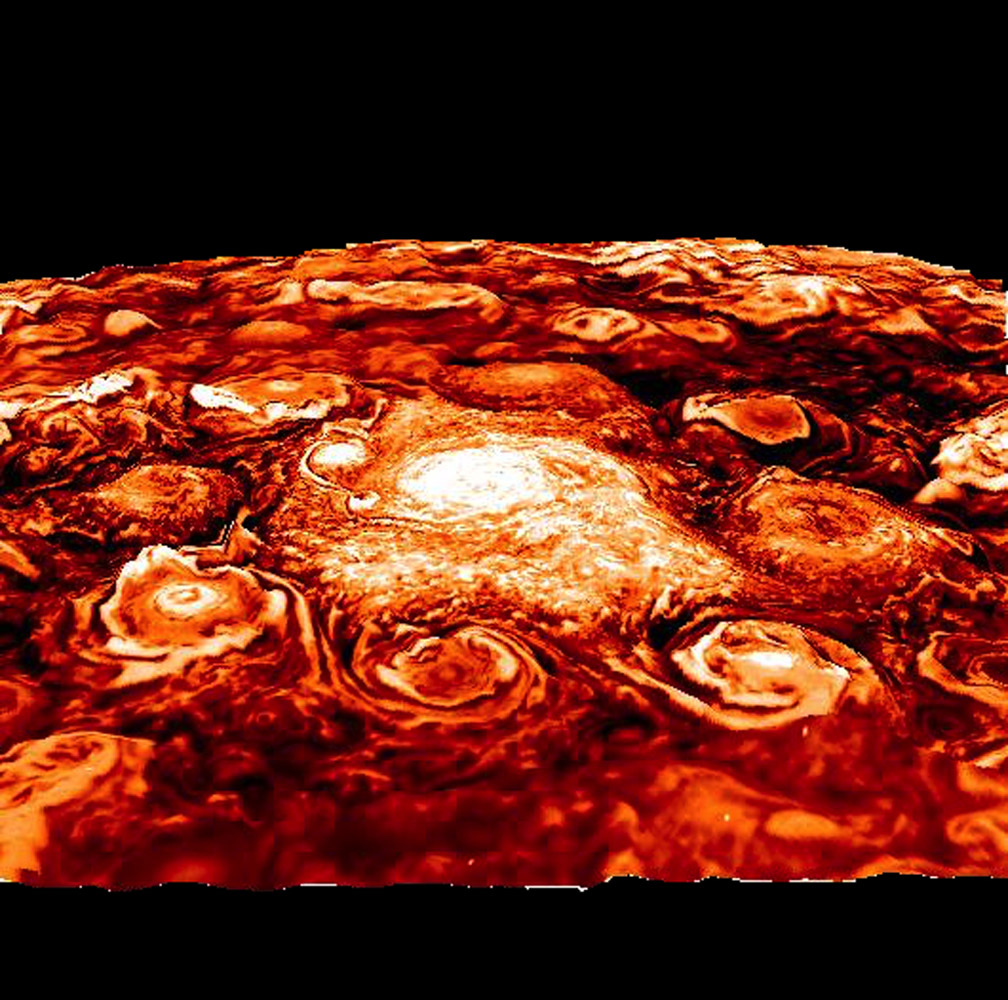 This computer-generated image is based on an infrared image of Jupiter’s north polar region that was acquired on February 2, 2017, by the Jovian Infrared Auroral Mapper or JIRAM instrument aboard Juno during the spacecraft’s fourth pass over Jupiter. Image Credit: NASA/JPL-Caltech/SwRI/ASI/INAF/JIRAM

Another surprise is that beneath the massive weather layer, Jupiter rotates as a rigid object.

Juno co-investigator Tristan Guillot of the Universite Cote d’Azur in Nice, France, lead author of the paper on Jupiter’s deep interior, hopes data collected by Juno during upcoming science passes will help scientists understand the transition from Jupiter’s weather layer to the rigid body beneath it.

“Juno‘s discovery has implications for other worlds in our solar system and beyond. Our results imply that the outer differentially-rotating region should be at least three times deeper in Saturn and shallower in massive giant planets and brown dwarf stars.”

An important insight conveyed by the Juno data is that gas giants can be very different from one another. Infrared images of Jupiter’s north and south poles, captured by Juno‘s Jovian Infrared Auroral Mapper (JIRAM) instrument show the weather layers there from the cloud tops to a depth of between 30 and 45 miles (50 and 70 km).

The stunning, colorful polar images reveal one large, central cyclone at each pole. At the north pole, that cyclone is surrounded by eight circumpolar cyclones that have diameters ranging from 2,500 to 2,900 miles (4,000 to 4,600 km). At the south pole, the central cyclone is surrounded by five cyclones with diameters between 3,500 and 4,300 miles (5,600 to 7,000 km).

Saturn, in contrast, has one cyclone at each pole.

All of Jupiter’s polar cyclones have powerful winds, with speeds as high as 220 miles per hour (350 km per hour).

“Prior to Juno, we did not know what the weather was like near Jupiter’s poles. Now, we have been able to observe the polar weather up-close every two months,” said mission co-investigator Alberto Adriani of the Institute for Space Astrophysics and Planetology in Rome and lead author of the paper on the weather at Jupiter’s poles.

The polar cyclones are all in close proximity to one another and appear to be long-lasting. “There is nothing else like it that we know of in the solar system,” Adriani emphasized. “The question is, why do they not merge?”

Attaining such a wealth of data on the giant planet is possible due to Juno‘s unusual polar orbit, its high-precision radio science, and its infrared technologies, said Juno principal investigator Scott Bolton of the Southwest Research Institute (SwRI) in San Antonio, Texas. “Juno is only about one third the way through its primary mission, and already we are seeing the beginnings of a new Jupiter.” 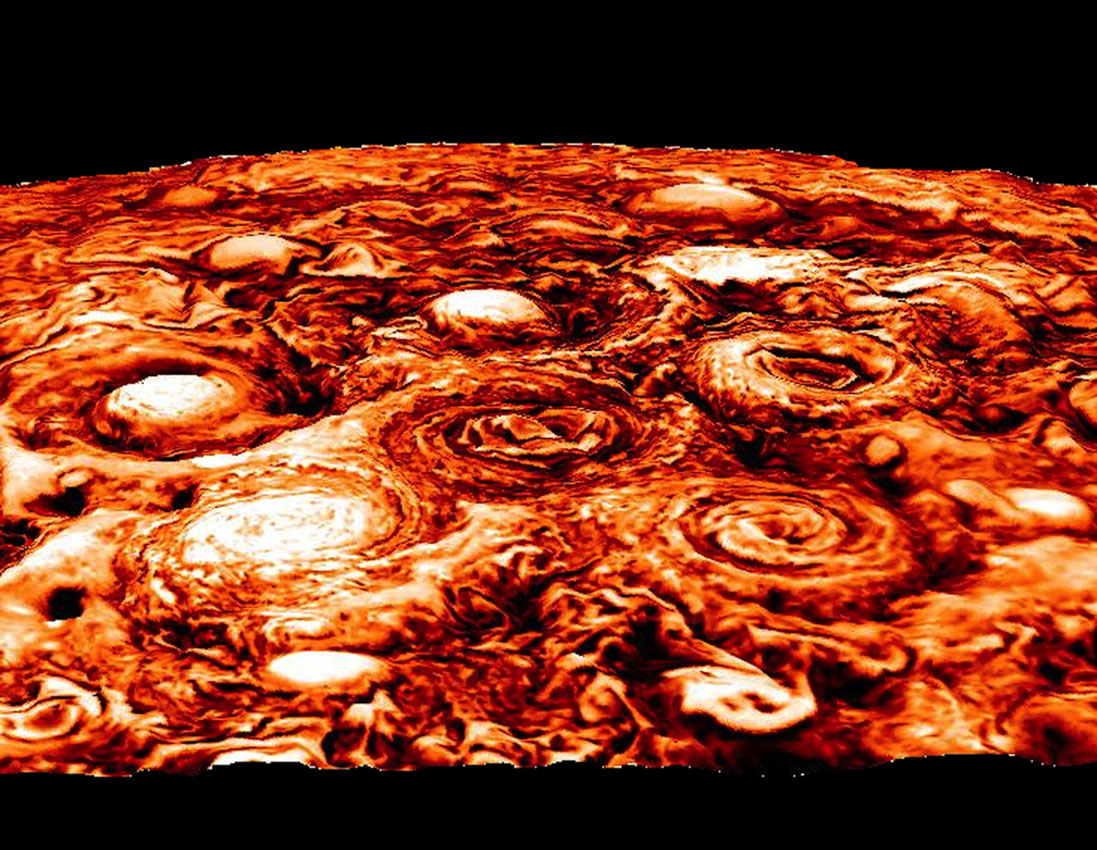 This computer-generated image shows the structure of the cyclonic pattern observed over Jupiter’s south pole. Like in the north, Jupiter’s south pole also contains a central cyclone, but it is surrounded by five cyclones with diameters ranging from 3,500 to 4,300 miles in diameter. Image Credit: NASA/JPL-Caltech/SwRI/ASI/INAF/JIRAM