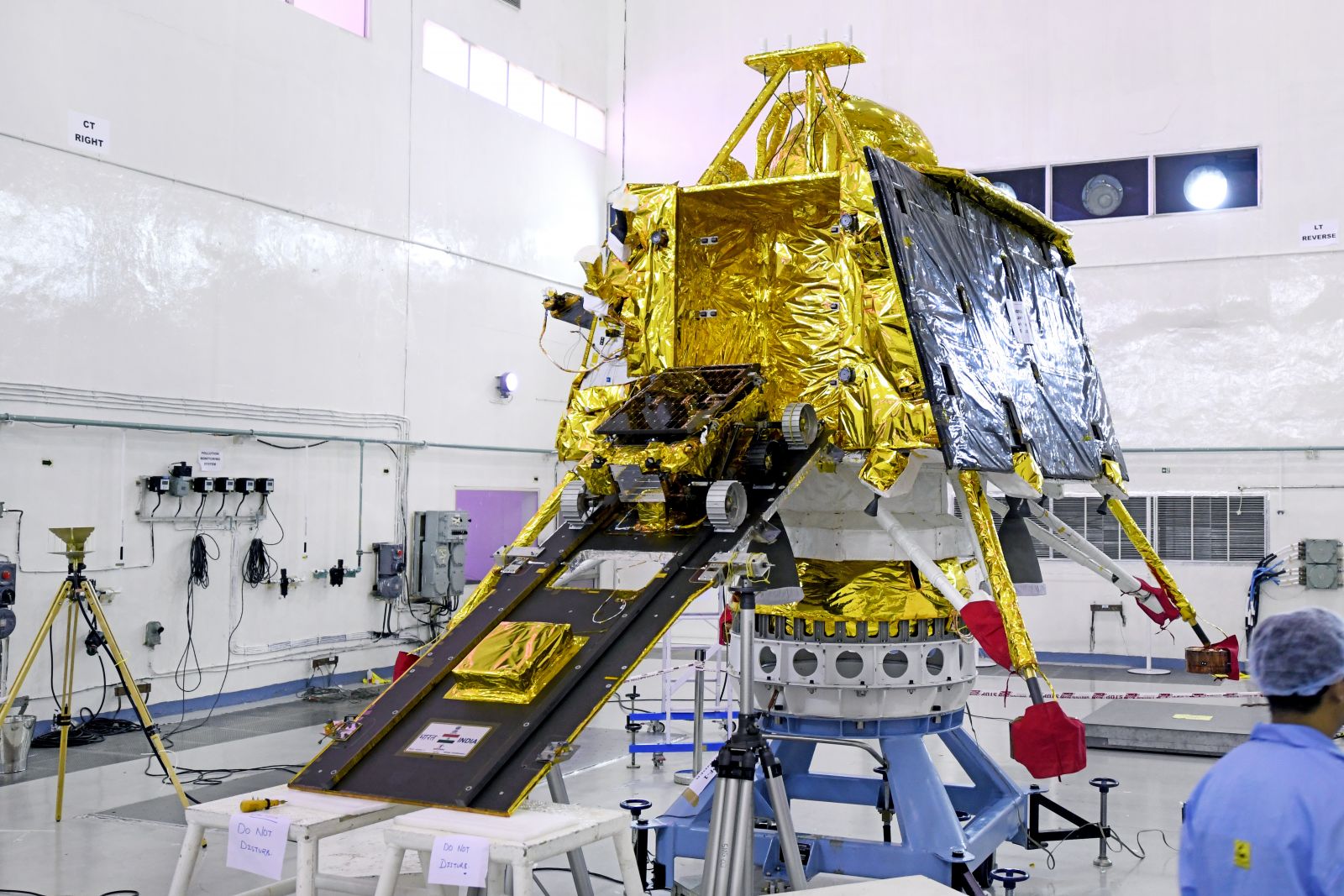 The Pragyan rover can be seen rolling up the ramp of the Vikram lander in this image. Photo Credit: ISRO

Liftoff occurred at  2:43 p.m. IST on July 22, 2019 from the Second Launch Pad at Satish Dhawan Space Centre SHAR, Sriharikota. Sriharikota is a barrier island off the Bay of Bengal coast located in the Nellore district of Andhra Pradesh, India.

Now that it has left the pad, the three-part payload for the mission will take center stage. Chandrayaan-2 has it all, an orbiter a lander and even a rover.

The orbiter has been directed to enter into a 62-mile (100-kilometer) lunar orbit. Once there, it will release the lander (called Vikram) for a soft landing on the lunar surface. The landing is scheduled to occur on Sept. 7, 2019.

The lander’s target is between two craters, Manzinus C and Simpelius N. If it touches down safely it should deploy a rover which weighs about 44 lbs (20-kilograms). The rover will explore the lunar terrain in a semi-autonomous mode for about half a month. It’s role in the mission is to study the lunar regolith.

The six-wheeled rover (dubbed Pragyan) has been tasked with remote sensing activities and it should have launched with the rest of the Chandrayaan-2 mission earlier this year (in January). However, two earlier mishaps with ISRO missions saw the launch delayed in order to better guarantee the mission’s success.

“We don’t want to take any risk,” Kailasavadivoo Sivan, the chairman of ISRO said in a speech last year (2018). His comments appear to refer to setbacks the ISRO has suffered – the PSLV-C39 launch failure in August of 2017 and the loss of communications with the GSAT-6A satellite in April 2018.

Those concerns appear to be well placed as the July 14 launch attempt for Chandrayaan-2 was scrubbed less than an hour before the opening of the launch window. The ISRO posted the following statement on their Twitter feed:

A technical snag was observed in launch vehicle system at T-56 minute. As a measure of abundant precaution, #Chandrayaan2 launch has been called off for today. Revised launch date will be announced later.

India’s first mission to the Moon, Chandrayaan-1, operated from lunar orbit between October of 2008 and August of 2009. The goal of that mission was to study the chemical, mineralogical, and makeup of the Moon.

According to the ISRO, Vikram and Pragyan will: “…carry out experiments on Lunar surface for a period of 1 lunar day which is equal to 14 Earth days.” The orbiter itself should spend about a year orbiting the Moon. According to Universe Today: “…a day on the Moon lasts as long as 29.5 Earth days.”

The last paragraph of this article was edited at 6:14 p.m. EDT (22:14 GMT) to include information from both the Indian Space Research Organisation and Universe Today.

Which part makes this “big leagues”? More than anything ISRO has accomplished so far? I am missing the key distinguising factor here. If its regarding the lander/rover, then they arent in the big leagues until is on the surface (ask Isreal about that).

Also, a lunar day is 29 day Earth days. The duration of day/night (sunrise/sunset) is two weeks.

Since you know so much, you must know the blue words are links. I clicked on one from the ISRO. They say: 1 lunar day which is equal to 14 Earth days. Maybe you should take it up with them.

Chambers….maybe you should click on the “Commenting Rules” blue link, see whats in there.

Appears the definition of “day” is ambigiuos, and both are accurate.

I read it back when I started coming here a couple years ago. Would you like to tell me where I violated the rules?

The rocket used was GSLV Mk-3. You have mentioned Mk-2.

Asking him to check the sources is “talking down to others”? That’s not an ad hominem attack, that’s making sure people check their facts before trying to correct others.