Is there life on Rosetta’s comet? New claims spark controversy 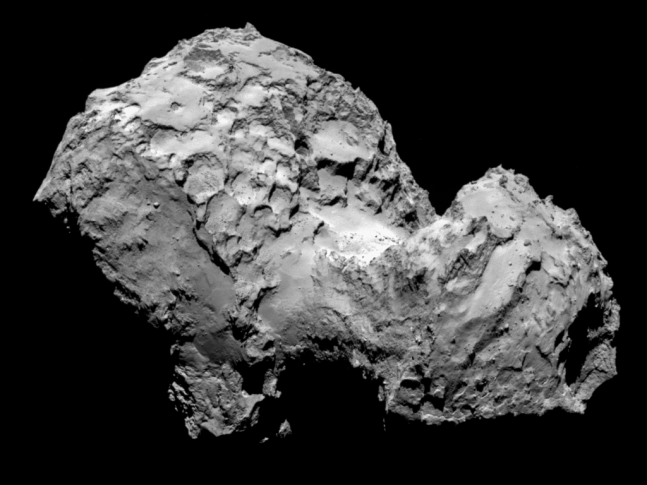 The European Space Agency's Rosetta spacecraft has detected the presence of water ice on the surface of Comet 67P/Churyumov-Gerasimenko. Photo Credit: ESA

Two British scientists made the headlines on Monday, July 6, by making the extraordinary claim that Comet 67P/Churyumov-Gerasimenko hosts microbial alien life, which immediately sparked a wave of skepticism. The University of Buckingham’s Chandra Wickramasinghe and his colleague, Max Wallis of the University of Cardiff, presented their findings at the National Astronomy Meeting 2015, which is taking place this week in Llandudno, Wales.

“Rosetta has already shown that the comet is not to be seen as a deep-frozen inactive body, but supports geological processes and could be more hospitable to micro-life than our Arctic and Antarctic regions,” Wallis said.

The scientists stated that micro-organisms have shaped the comet’s activity resulting in distinct and unexpected features on its surface. The comet does, in fact, have a set of interesting attributes for further study. These include a black, carbon-containing crust and underlying ice; large, smooth ‘seas’; flat-bottomed craters and a surface peppered with mega-boulders. According to the researchers, the characteristic features might only be explained by the presence of microbial life.

Wallis and Wickramasinghe, through the use of computer simulations, claim that the micro-organisms probably require bodies of liquid water to colonize the comet and could inhabit cracks in its ice and ‘snow’. The temperatures, as low as -40 °C, are no problem for organisms containing anti-freeze salts. They noted that microbes have proven to be particularly good at adapting to such a frigid environment.

The researchers noticed that as the comet travels toward the closest point in its orbit (perihelion) around the Sun, the temperature is rising, the out-gassing is increasing, and any possible micro-organisms living on the comet should then become increasingly active.

Shortly after the new findings were announced, they attracted criticism from other scientists specializing in the search for extraterrestrial life, debunking the newly presented hypothesis.

“Certainly the presence of ice and organic solids on comets in general, and on Churyumov-Gerasimenko, in particular, is well established. However, jumping from that to micro-organisms and even to lakes of liquid water is going well beyond the data,” Chris McKay, an astrobiologist at NASA’s Ames Research Center told NBC News. Artist’s depiction of the Philae lander on the surface of comet 67P/Churyumov-Gerasimenko. Image Credit: ESA

Sarah M. Hörst, an assistant professor of Earth and Planetary Science at Johns Hopkins University, is also skeptical, noting that chemistry can become super complex without life being involved. According to her, unusually complex organic molecules and interesting activity on the comet aren’t compelling signs of life.

“We know complex organics are generated many places in the Solar System through photochemistry and we know that type of organic material can be refractory, so I don’t see any compelling evidence from the press release that there is evidence for anything other than abiotic chemistry,” she told The Washington Post.

67P/Churyumov-Gerasimenko is currently being studied by ESA’s Rosetta orbiter along with the Philae lander on the comet’s surface. Philae would provide more insights on the recent claims but, unfortunately, after its troubled stay on the comet, communications with the probe are now irregular and unstable. The lander woke up after seven months of hibernation and the main concern for scientists now is to maintain contact with it.

Once Philae can receive and execute extensive command sequences safely as well as store the measurement data and send it to the ground team, its 10 instruments will be operated again.

Meanwhile, Rosetta project scientist Matt Taylor has also addressed the recent ‘life on the comet’ claims, by saying: “It’s pure speculation, I think it is unlikely,” The Telegraph reports.

However, Wallis and Wickramasinghe, undeterred by the skepticism, see further evidence for life in the detection by Philae of abundant complex organic molecules on the surface of the comet and in the infrared images taken by Rosetta.

“If the Rosetta orbiter has found evidence of life on the comet, it would be a fitting tribute to mark the centenary of the birth of Sir Fred Hoyle, one of the undisputable pioneers of astrobiology,” Wickramasinghe concluded. Philae landed on the surface of Comet 67P/Churyumov–Gerasimenko on Nov. 12, 2014. Image Credit: ESA

Amazing. I remember a sci-fi story about about a manned mission to Halley’s Comet and finding life on it; blooming as it approached the Sun, and going dormant as it passed outside the orbit of Jupiter.
My main argument against this proposed idea lay within the viable ‘window of propagation’.
We know microbial life has been found existing and thriving in many extreme conditions. Also, there are many examples of life forms remaining viable after many years of dormancy; however, active/dormant cycles that could exist on a comet along side atmospheric conditions (that make Mars look like a day at the spa) add severs hardships. Additionally, like Mars, comets have no magnetic fields for shielding.
What they suggest is very interesting, but a bit incredulous.

Ya, better get more data. If true, it would be a phenomenal finding and they have just pasted their names on it. We’d know more about the possible origins of life, and that it is far more abundant in the cosmos than anyone (except SciFi authors) ever dreamed. I big step like that takes big proof.
Also, just because life might live there, does not necessarily mean that life can evolve there. The hot-cold cycle on comets is more drastic than anything else that orbits.