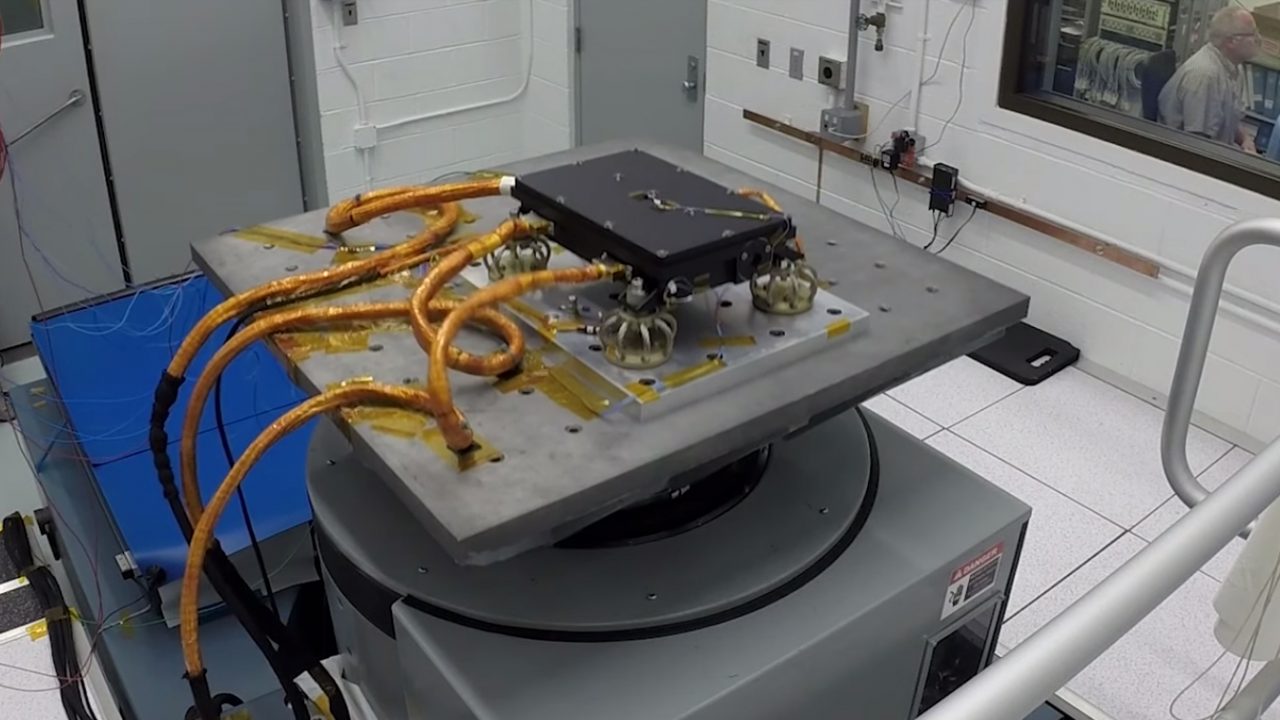 Vibration testing of the MEDLI2 primary electronics box was successfully completed recently at NASA’s Langley Research Center in Hampton, Virginia. Flight hardware is being shipped and installed on the Mars 2020 entry vehicle in preparation for next year’s launch. Photo Credit: NASA

Entry, landing and decent (EDL) is one of the most challenging phases of any Mars mission. Engineers recently began installing hardware on the entry vehicle of NASA’s Mars 2020 rover mission that will help increase the safety of future missions to the Red Planet.

The Mars Entry, Descent and Landing Instrumentation 2 (MEDLI2) suite of sensors will measure aerothermal environments and the performance of the entry vehicle’s thermal protection system during the Mars 2020 mission’s entry phase. The entry vehicles’ aeroshell, which protects the Mars 2020 rover during the trip to Mars and entry into the Martian atmosphere, consists of a back shell and and a heat shield.  Engineers recently began installing the first group of MEDLI2 sensors onto the heat shield.

“Understanding the actual performance of our current generation of entry vehicles is crucial to safe, reliable landing of future robotic and crewed Mars missions. MEDLI2 pressure and thermal measurements are the key to that understanding,” said Todd White, MEDLI2 principal investigator.

Environmental testing of some MEDLI2 flight hardware was recently conducted at NASA’s Langley Research Center in Hampton, Virginia. The tests, which include vibration and thermal vacuum testing, are designed to determine the ability of the hardware to survive the intense shaking during launch and the intense cold during the mission’s cruise phase. Some of the hardware has also undergone high-temperature sterilization to minimize the chances of unintentionally sending biological material from Earth to the surface of Mars.

MEDLI2 builds on lessons learned from the Mars Science Laboratory Entry, Descent and Landing (MEDLI) suite of sensors developed for NASA’s Curiosity rover. MEDLI2 consists of three types of sensors (thermocouples, heat flux sensors and pressure transducers), the Sensor Support Electronics Unit and the wiring harnesses which connect the sensors to the Sensor Support Electronics Unit.  The pattern of sensors placed the heat shield has been improved based on the experience of MEDLI, and there will be additional instrumentation installed in the entry vehicle’s backshell.

Flight data gathered by MEDLI2 is expected to fill gaps in critical entry, descent and landing knowledge and help advance EDL technology. Improved technology and data may reduce thermal protection system mass by as much as 35 percent, and also allow more precise landings.

“Uncertainties in our ability to model and predict the performance of an entry vehicle and the associated thermal protection system mean that large margins (100 to 200 percent) need to be included in our predictions to ensure the entry vehicle can survive the worst case conditions,” said Henry Wright, MEDLI2 project manager. “Flight data will allow the uncertainties in the models to be further reduced leading to a more accurate prediction of the loads and performance.”

All of the MEDLI2 components are expected to be installed on the Mars 2020 aeroshell by the end of November of this year. The Mars 2020 is scheduled to launch from Cape Canaveral Air Station atop a United Launch Alliance Atlas V rocket sometime between July 17 and August 5 of 2020. If all goes well, the rover will land on Mars at Jezero Crater on February 18, 2021. The rover’s primary mission is expected to last at least one Mars year (about 687 Earth days).