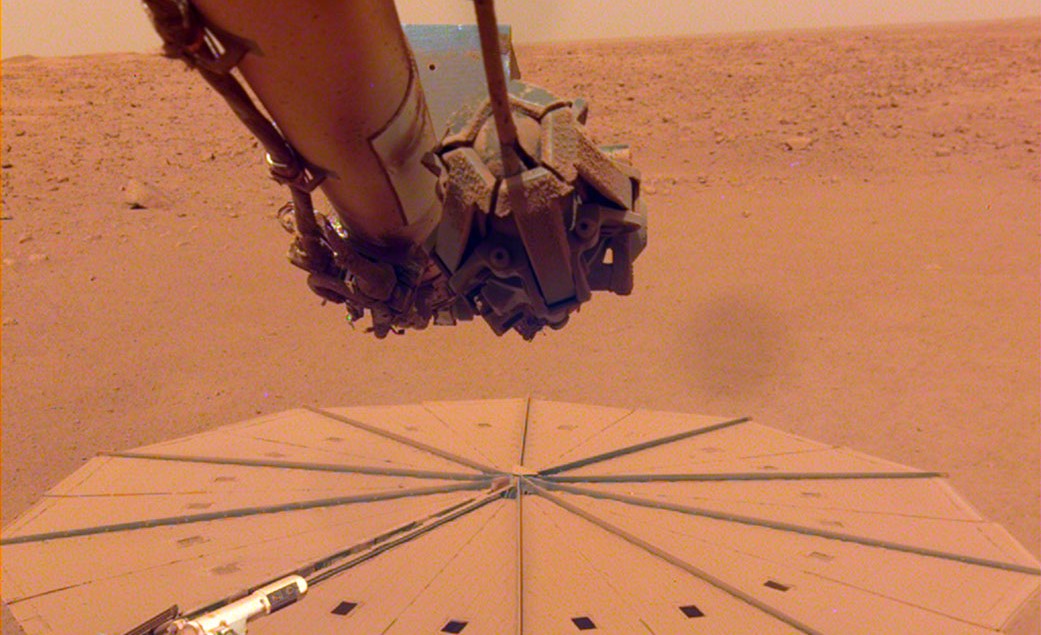 After 3.5 years, enough dust has accumulated on InSight and its solar panels to slowly decrease its available power by 90%. The stationary lander is not expected to be functioning beyond the end of this year. Credit: NASA

NASA’s Martian quake hunter InSight is reaching the end of its mission as dust on the spacecraft’s solar panels are causing it to slowly lose power.

Having landed on the Red Planet in November of 2018, NASA’s Interior Exploration using Seismic Investigations, Geodesy and Heat Transport, InSight, was originally scheduled to last about one Martian year, or approximately two Earth years. Having already accomplished its primary objective, InSight has since been operating an extended mission.

One of the biggest issues plaguing the lander over the last year has been the accumulation of dust on the solar panels. The panels are responsible for providing power to the spacecraft’s seismic instruments as well as other critical instruments pertaining to the lander’s health.

Recently, teams at NASA’s Jet Propulsion Laboratory tried to utilize falling sand from the lander’s robotic arm to try to help the wind carry some of the dust off the panels. This approach yielded some success and was enough to allow the spacecraft to continue measuring seismic activity beyond its life expectancy.

However, with the changing seasons abound and dust levels increasing, the spacecraft will soon not be able to power its own arm. Flight controllers are expected to move the arm into a final “retirement position” in the coming weeks.

While there is hope that a Martian wind-related weather event could potentially wipe some of the dust from InSight’s solar panels, this outcome is considered unlikely. At the current rate of coverage, the landers panels are only producing roughly 500 watt-hours each day, compared to the 5,000 watt-hours they were producing at the beginning of the mission.

“We’ve been hoping for a dust cleaning like we saw happen several times to the Spirit and Opportunity rovers,” said Bruce Banerdt, InSight’s principal investigator at NASA’s Jet Propulsion Laboratory in Southern California, which leads the mission. “That’s still possible, but energy is low enough that our focus is making the most of the science we can still collect.”

The lander’s seismic-measuring instruments will remain powered until they essentially stop responding, which is currently expected to occur later this year. Non-seismic instruments will likely be powered off in the coming weeks.

The science provided by the InSight lander has been invaluable in helping scientists understand the geographic makeup of the Red Planet including its mantle, core, crust and seismic activity.