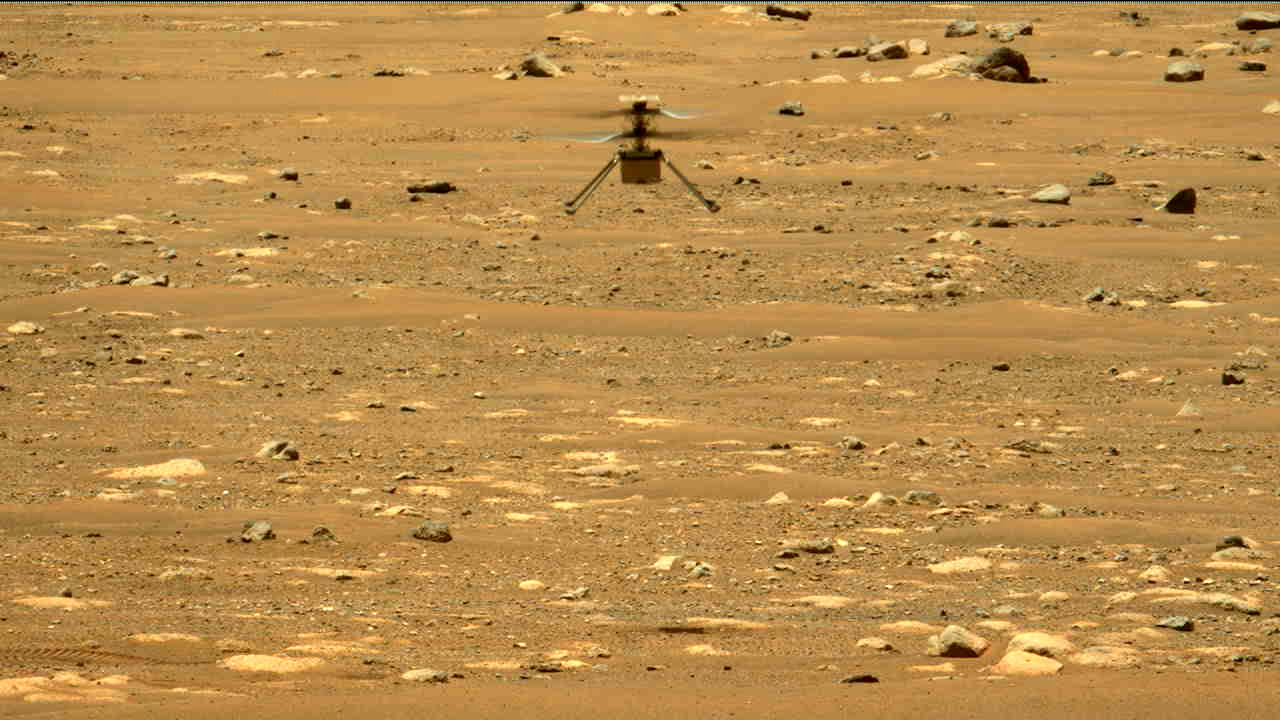 An image of the Ingenuity Mars Helicopter during its second flight on April 22, 2021. The photo was captured by the Perseverance rover, located about 70 meters away. Credit: NASA/JPL-Caltech/MSSS

After making history as the first powered aircraft on another planet, the Ingenuity Mars Helicopter flew for a second time, this time even farther and longer.

The Ingenuity Mars Helicopter that has taken the aerospace world by storm took to the Martian skies again Thursday, April 22, for a flight slightly higher and lengthier flight its first. NASA officials at the Jet Propulsion Laboratory in Pasadena, California, confirmed the helicopter successfully took off to an altitude of 16 feet (5 meters) above the surface, tilted about 5 degrees to travel flew 7 feet (2 meters) downrange and finally traveled back to its original takeoff point before successfully touching down.

“The helicopter came to a stop, hovered in place, and made turns to point its camera in different directions,” Havard Grip, Ingenuity’s chief pilot at JPL, said in a NASA press release. “Then it headed back to the center of the airfield to land. It sounds simple, but there are many unknowns regarding how to fly a helicopter on Mars. That’s why we’re here – to make these unknowns known.”

Ingenuity’s first flight took place on Monday, April 19, and was essentially a proof of concept. Once the engineers at JPL were certain the design worked, and that powered flight on the surface of Mars was indeed possible, they decided to proceed with incrementally longer and higher test flights.

NASA originally announced that Ingenuity would be expected to make up to five flights during the duration of a 30-day experimental window. The next flight is expected to put the helicopter through its paces, traveling up to 165 feet (50 meters) away from the area where it took off before returning to the center of “Wright Brothers Field.”

According to NASA, flying an aircraft on Mars is more difficult than doing so on Earth, mainly because the atmosphere is only 1% as dense as Earth’s. As such, the vehicle must be light (1.8 kilograms in Ingenuity’s case) and its rotors must spin extremely-rapidly: at least 2,400 rotations per minute.

“So far, the engineering telemetry we have received and analyzed tell us that the flight met expectations and our prior computer modeling has been accurate,” said Bob Balaram, chief engineer for the Ingenuity Mars Helicopter. “We have two flights of Mars under our belts, which means that there is still a lot to learn during this month of Ingenuity.”