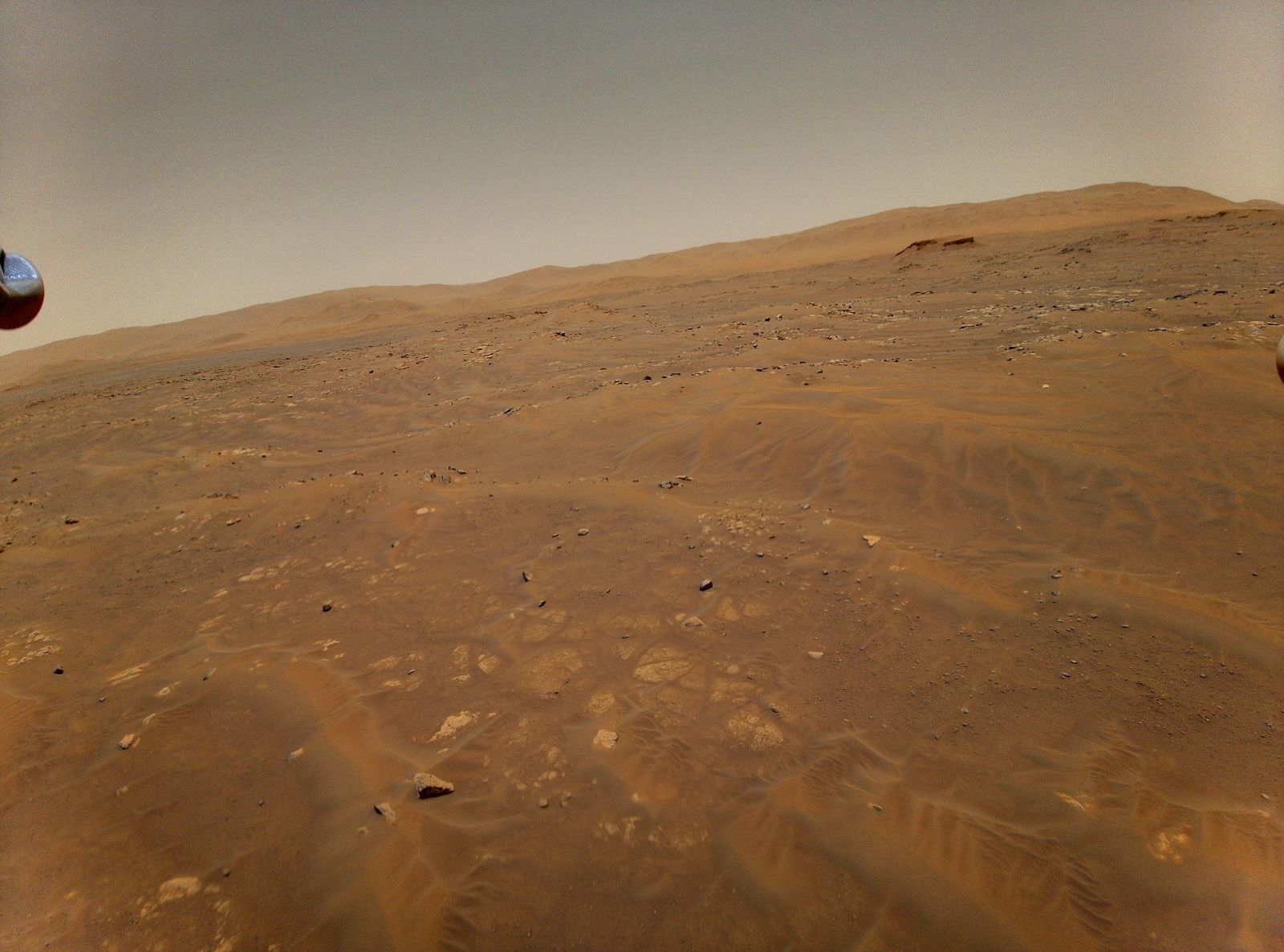 The onboard color camera on the Ingenuity Mars Helicopter captures this image of the horizon as it experiences large oscillations during the latter part of its sixth flight on Mars. Nonetheless, the helicopter landed safely within 15 feet of its intended location. Credit: NASA/JPL-Caltech

After five near-flawless flights, NASA’s Ingenuity Mars Helicopter ran into trouble during its sixth, testing the margins of the spacecraft’s stability.

On May 22, 2021, (Sol 91 of the Perseverance rover mission) Ingenuity completed its sixth flight on the surface of Mars. According to NASA’ Jet Propulsion Laboratory in Pasadena, California, it was programmed to climb to an altitude of 33 feet (10 meters), translate 492 feet (150 meters southwest at about 9 miles per hour (4 meters per second). It was to then translate 49 feet (15 meters to the south while taking images toward the west before flying another 164 feet (50 meters northeast to land.

According to downlink received hours after the flight, the helicopter began its journey by lifting off the Martian soil and climbing to an altitude of about 33 feet (10 meters) and continued as planned for the first 150 meters before an issue cropped up.

Luckily, the helicopter is equipped with numerous redundant systems, as well as hardware that is designed to handle sudden changes in aerodynamic stress. The spacecraft performed a controlled descent back to the surface, safely coming to rest approximately 65 meters after the anomaly began, roughly within 16 feet (5 meters) from the targeted landing location. 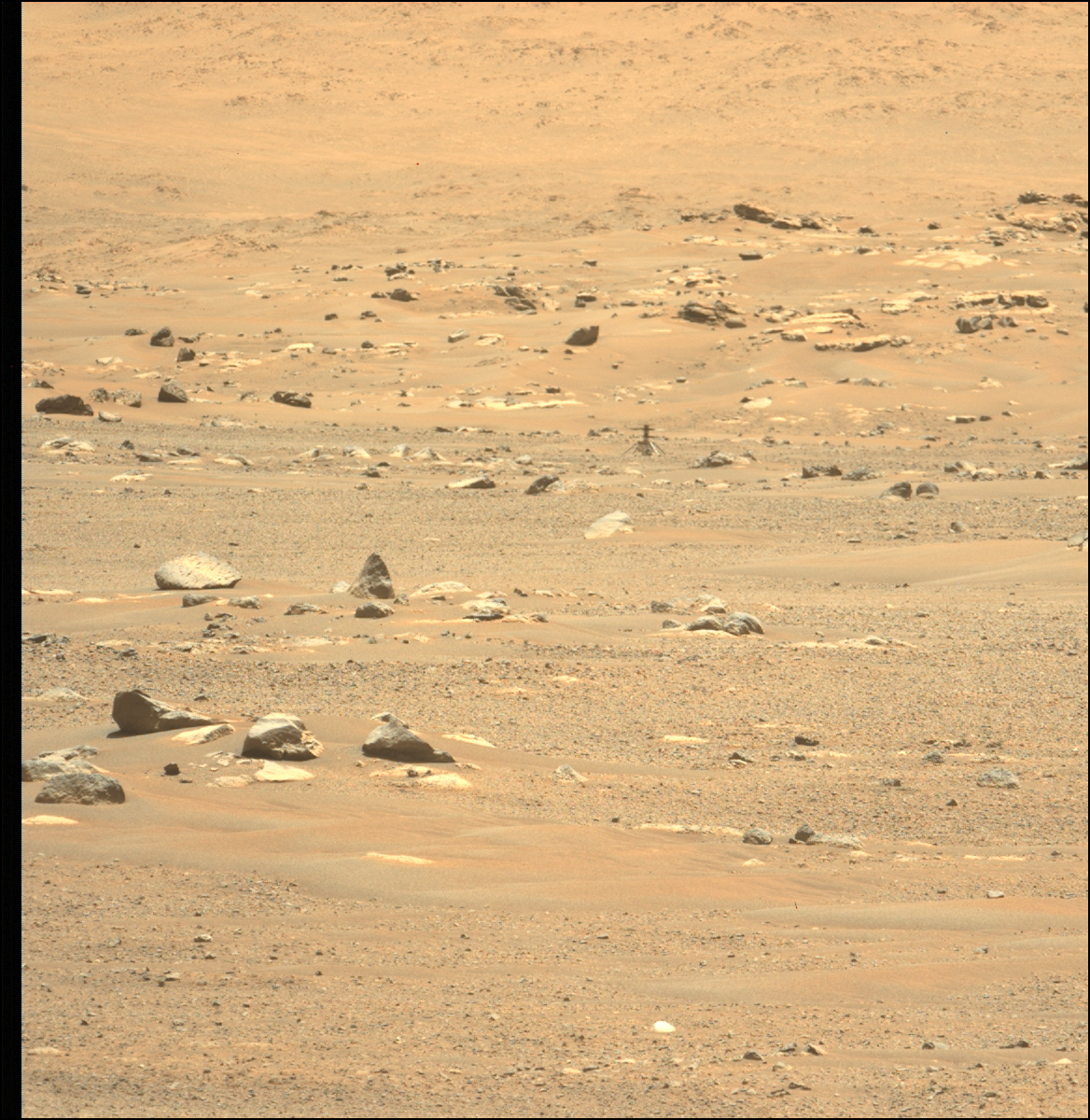 A view of the Ingenuity Helicopter as seen from the Perseverance rover the day after its sixth flight using its Mastcam-Z instrument. Credit: NASA/JPL-Caltech

According to NASA, all data indicates the anomaly was caused by a timing error in the helicopter’s onboard navigation cameras, resulting in incorrect position data being fed to the flight system.

“This glitch caused a single image to be lost, but more importantly, it resulted in all later navigation images being delivered with inaccurate timestamps,” Havard Grip, Ingenuity Mars Helicopter chief pilot, wrote in a JPL status update on May 27. “From this point on, each time the navigation algorithm performed a correction based on a navigation image, it was operating on the basis of incorrect information about when the image was taken. The resulting inconsistencies significantly degraded the information used to fly the helicopter, leading to estimates being constantly ‘corrected’ to account for phantom errors.”

According to Grip, large oscillations up to 20 degrees ensued. Additionally, sensors indicated large spikes in power consumption (likely due to the large control inputs).

Scientists at JPL are confident the issue will be resolved given the abundance of data received from the incident.

“While we did not intentionally plan such a stressful flight, NASA now has flight data probing the outer reaches of the helicopter’s performance envelope,” Grip wrote. “That data will be carefully analyzed in the time ahead, expanding our reservoir of knowledge about flying helicopters on Mars.”

An animated GIF of the last 30 seconds of Ingenuity’s sixth flight. Credit: NASA/JPL-Caltech