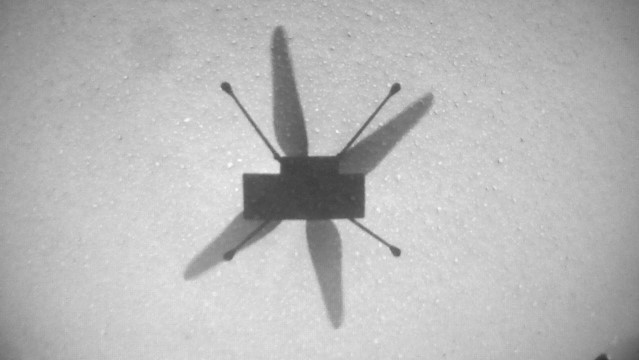 The shadow of the Ingenuity Mars Helicopter as it completes its seventh flight on Mars. Credit: NASA/JPL-Caltech

Ingenuity has successfully completed its seventh flight across the surface of Mars.

Fresh off of a recent in-flight anomaly, the Ingenuity Mars Helicopter lifted off of the Martian surface around noon local time on sol 107 (June 8, 2021) of the Perseverance rover mission. It then flew some 350 feet (about 106 meters) south of its liftoff spot before coming to rest at its new base of operations. The total flight time was 62.8 seconds.

According to NASA, this was the second time the helicopter landed at an airfield it did not survey from the air during a previous flight. For flight seven, scientists at NASA’s Jet Propulsion Laboratory took advantage of imagery collected from the HiRISE camera aboard the space agency’s Mars Reconnaissance Orbiter.

NASA said the place where Ingenuity landed after its seventh flight appeared to be a flat and welcoming area for the helicopter to call home until the next flight.

This marks the second flight within Ingenuity’s new “operations demonstration” phase.  It is hoped that these flights will prove useful for the development of future Martian aircraft.

Ingenuity as seen by the Perseverance rover’s Mastcam-Z imager following the helicopter’s fifth flight on May 7. Credit: NASA/JPL-Caltech