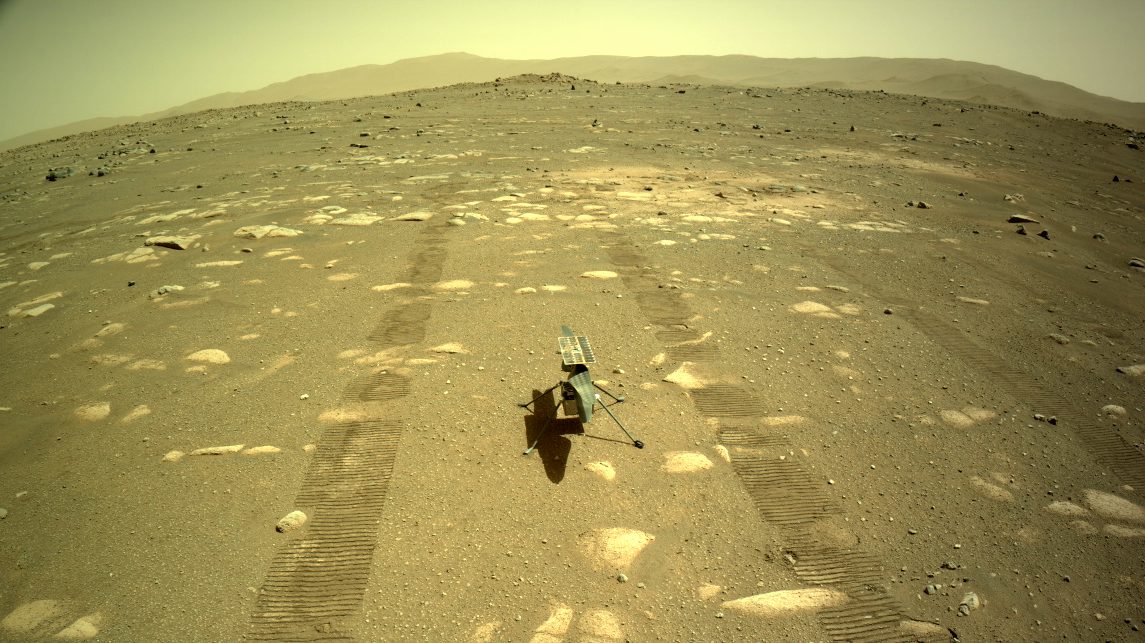 The Ingenuity helicopter has been deployed on the surface of Mars after hitching a ride to the red planet on the belly of the Perseverance rover. Credit: NASA

NASA’s first interplanetary helicopter has touched the surface of Mars for the first time after the craft was deployed from underneath the much-larger Perseverance rover.

Since touching down on the surface of Mars in February, the rover and its Earth-based controllers have found a suitable spot on the Martian surface to act as a makeshift “helipad” for the experimental helicopter named Ingenuity.

Over the course of a week, the 1.8-kilogram aircraft was slowly deployed. This started with the jettison of a debris cover protecting the helicopter during Perseverance’s final sky crane descent to the surface of the red planet. 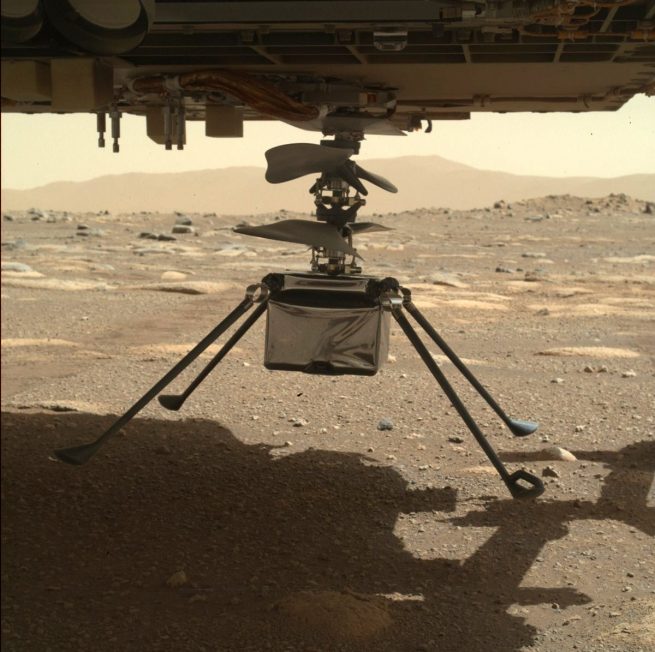 Ingenuity fully extended underneath the rover before its final deployment onto the surface of Mars. Credit: NASA

After that, the craft first was rotated from its stowed horizontal position to a vertical position and four extended legs and its battery fully charged using Perseverance’s power source.

Then on April 3, 2021, Ingenuity was released to drop a final four inches (10 centimeters) to the ground.

While this may not sound like an Earth-moving event, if the helicopter did not land properly, controllers on the ground would have had no way to bring Ingenuity upright again.

Soon after deployment, the rover backed away to allow the helicopter’s small solar panels to begin independently charging its batteries.

This will not only provide power to the aircraft but also give it the thermal energy it needs to survive the brutally-cold Martian nights, which can be as cold as minus 130 degrees Fahrenheit (minus 90 degrees Celsius).

The next steps over the coming days will be for controllers on Earth at NASA’s Jet Propulsion Laboratory in California to establish communications and begin checking the vehicle’s various systems.

These checks include eventually spooling up the experimental helicopter’s rotors to a low rpm to ensure that they’re working properly.

Ingenuity’s contra-rotating coaxial rotors are roughly 4 feet (1.2 meters) in diameter and operate up to 2,400 rpm in order to achieve lift in Mars’ atmosphere, which is about 1% as dense as Earth’s.

As of right now, Ingenuity’s first flight is slated for April 11 and is expected to last about 20 to 30 seconds, hovering just above the surface of the red planet.

Assuming that is successful, the helicopter team plans as many as four additional autonomous flights with increasing complexity over the course of its expected 30-day design life.