I have the power! Mars 2020 rover completes critical milestone 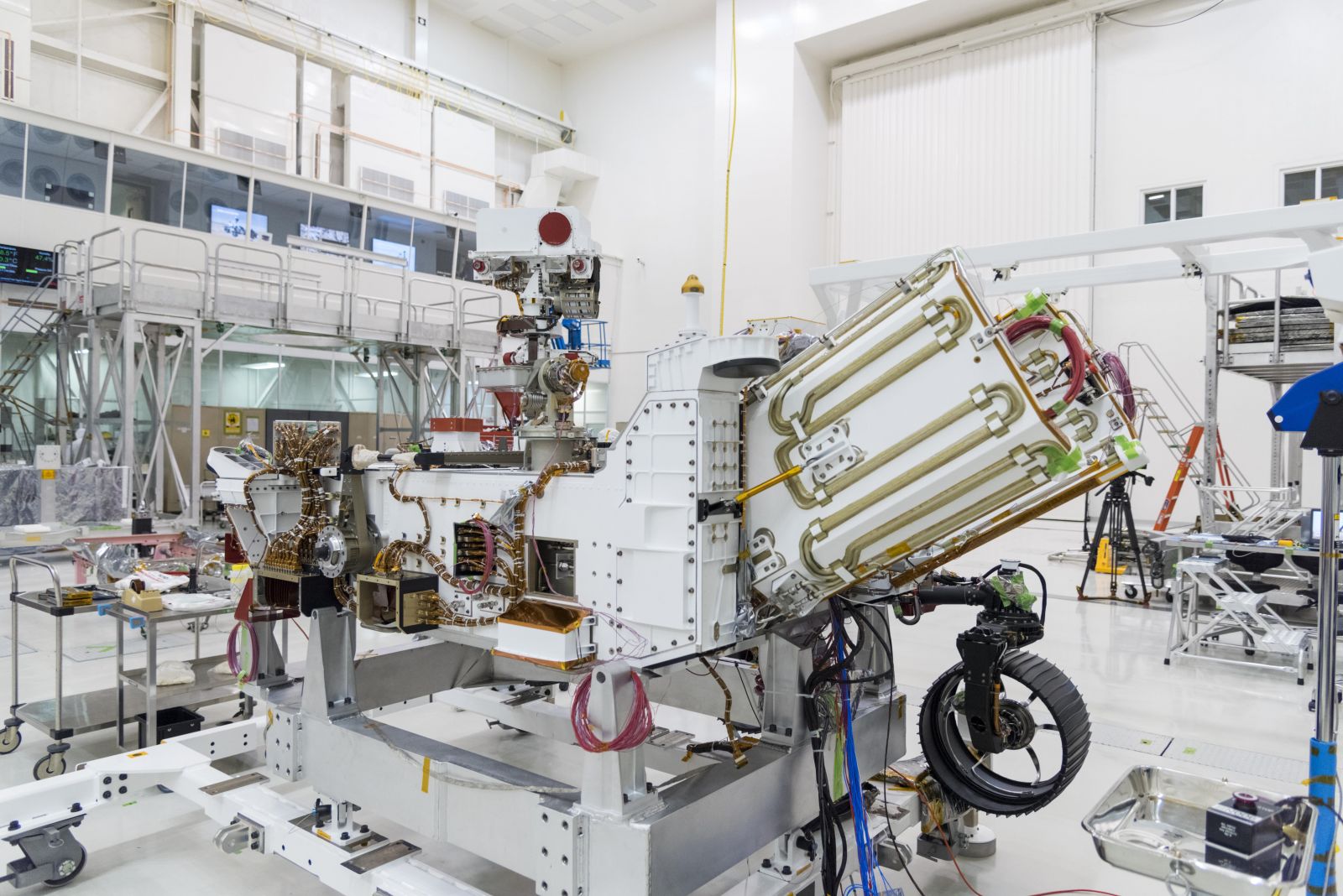 Does this power system make my butt look big? While this likely isn’t what the Mars 2020 rover was thinking when this photo was taken, the robot is getting closer to taking flight. Photo Credit: NASA / JPL

With just one year to go before the Mars 2020 rover’s scheduled launch, work is commencing on the Multi-Mission Radioisotope Thermoelectric Generator (MMRTG) that will serve as the rover’s power source.

Thomas Zurbuchen, Associate Director of NASA’s Science Mission Directorate, approved this next stage of the rover’s construction on July 24. As the first robotic spacecraft equipped with technology capable of selecting its own landing site, Mars 2020 is viewed by NASA as paving the way for crewed space missions to the Moon, Mars, and beyond.

Construction of the rover, which viewers can now watch live online thanks to a camera installed in the clean room at NASA’s Jet Propulsion Laboratory (JPL) in Pasadena, California, is proceeding on target. All of its interior parts have now been built except for the highly complex Adaptive Caching Assembly, which has a total of 3,000 parts, including seven motors.

“The progression of the Mars 2020 rover project is on schedule. The decision to begin fueling the MMRTG is another important milestone in keeping to our timetable for a July 2020 launch,” Zerbuchen emphasized.

After launching from Cape Canaveral Air Force Station on July 17, 2020, when Earth and Mars are in ideal positions relative to one another for the trip, the rover is scheduled to land in Jezero Crater on the Red Planet on February 18, 2021, using a sky crane descent landing system. Favorable alignments of Earth and Mars every two years reduce the amount of power and therefore cost needed for the journey.

Mars 2020‘s design and landing system are based on those used on the Curiosity rover, which touched down inside Mars’ Gale Crater in August 2012 and is still functioning nearly seven years later. 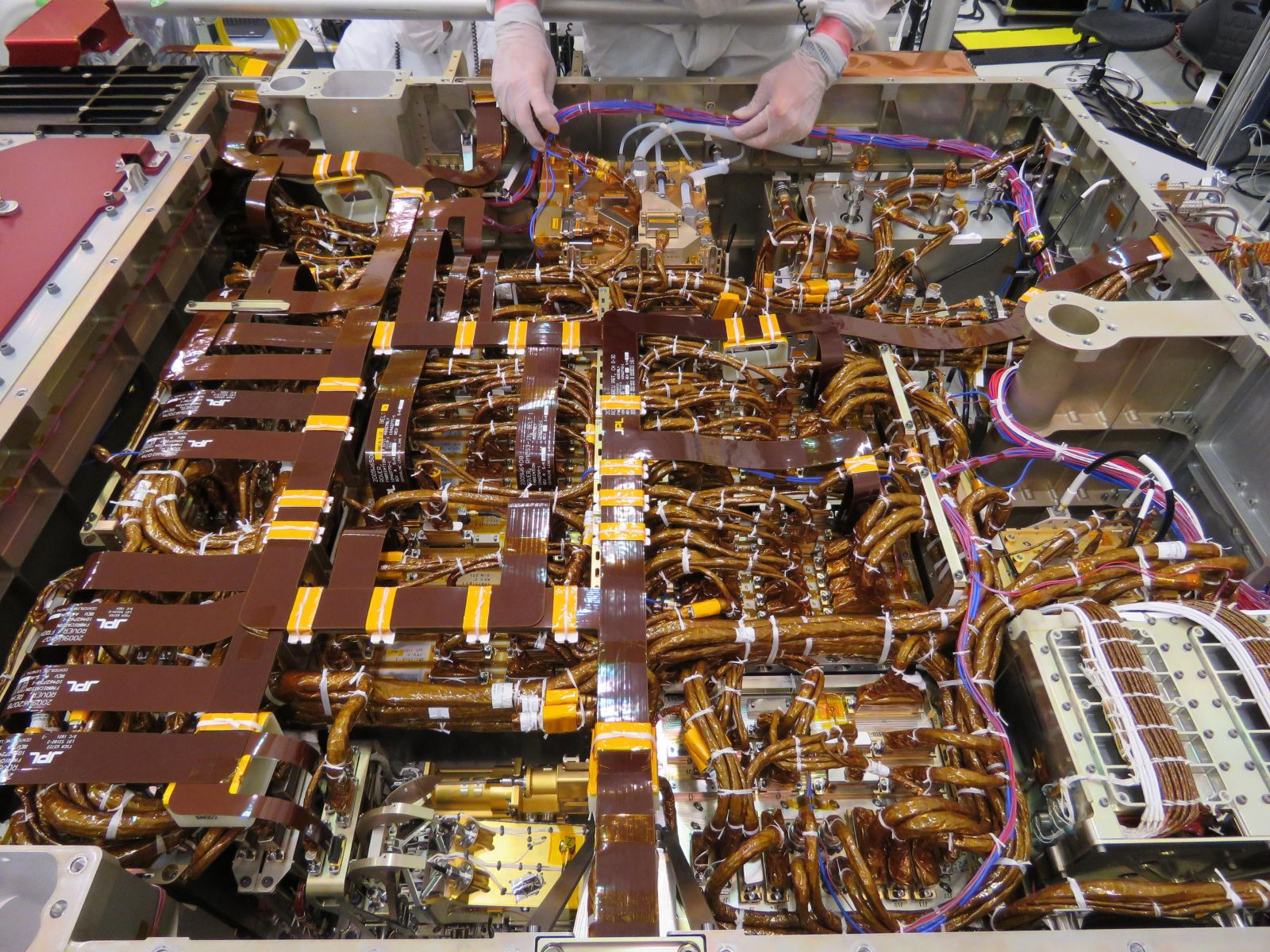 This image shows the interior of the Mars 2020 rover. It was taken on June 1, 2019, during its construction in NASA’s Jet Propulsion Laboratory’s Spacecraft Assembly Facility’s High Bay 1: Photo Credit: NASA/JPL-Caltech

Curiosity is also powered by an MMRTG, which converts heat from the decay of natural radioisotope materials into electricity. MMRTGs function as nuclear batteries, and the heat they generate keeps spacecraft and their science instruments warm in extremely cold environments. They are composed of a heat source containing plutonium-238 (Pu-238) and thermocouples that convert the heat  produced in Pu-238’s radioactive decay into electricity.

MMRTGs, which have been used to power a total of 27 NASA space missions, including the 1976 Viking landers, which touched down on Mars; Voyagers 1 and 2, now leaving the solar system, and New Horizons, which flew past Pluto and distant Kuiper Belt Object Ultima Thule, give new space missions approximately 110 watts of electricity at their start.

“We are advancing on all fronts–including completion of the cruise state that will guide us to Mars and the sky crane descent landing system that will gently lower us to the surface. And the rover is not only looking more and more like a rover each day; it’s acting like one,” stated Project Manager John McNamee of JPL.

Members of the public are invited to send their names to Mars for stenciling on chips that will be placed on board the rover.  Names must be submitted by Sept. 30, 2019. They can also follow the latest developments in the rover’s construction on the project’s official website.

Once on the Red Planet’s surface, Mars 2020 will search for signs of past habitability, study surface geological properties, search for any biosignatures preserved in Martian geology, and deposit sample containers for a future sample-return mission.