Hayabusa 2 launch postponed until Dec 3 due to weather 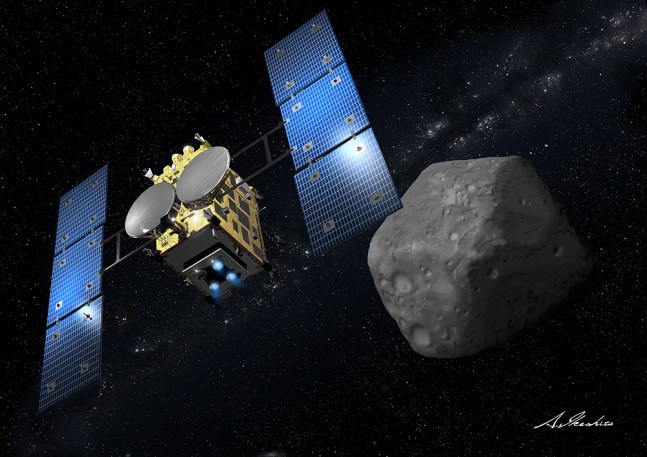 An illustration of Hayabusa 2 depicting its approach of the asteroid 1999 JU3. Image Credit: Akihiro Ikeshita

Less than 24 hours before the set launch time, the Japanese Aerospace Exploration Agency (JAXA) has declared that their Hayabusa 2 launch will be postponed until no-earlier-than Tuesday, Dec. 2 at 11:22 p.m. EST (Wednesday, Dec. 3 at 1:22 p.m. JST). The organization had announced on Friday, Nov. 28 that the original launch day of Nov. 30 had to also be pushed back due to a freezing layer of clouds in the atmosphere over the launch site at Tanegashima Space Center on Tanegashima Island. The asteroid-bound spacecraft will be the second probe from Japan to collect samples from an asteroid for scientists back on Earth.

In official release from JAXA the agency stated the following:

We decided to postpone as a result of the go/no go decision meeting today which carefully checked the weather forecast and found that strong wind exceeding the weather restrictions was projected around the launch pad at the scheduled launch time on the previous schedule launch day of Dec. 1 (Mon.), 2014.

The Mitsubishi Heavy Industries-built spacecraft and its piggyback payloads are part of an international collaboration between Japan, France, and Germany. Companies DLR (German Aerospace Center) and CNES (National Center for Space Studies) provided the MASCOT (Mobile Asteroid Surface Scout) lander which Hayabusa 2 will deploy to the asteroid’s surface.

Lifted into space by the H-IIA Launch Vehicle No. 26, Hayabusa 2 is expected to reach its targeted asteroid in 2018 before returning to Earth in late 2020.

JAXA also cautions that the launch may be delayed further depending on weather conditions and other factors.

Please check back with Spaceflight Insider for updates and coverage on the Hayabusa 2 launch.