Forget Mars, NASA considering sending a helicopter to one of Saturn’s moons 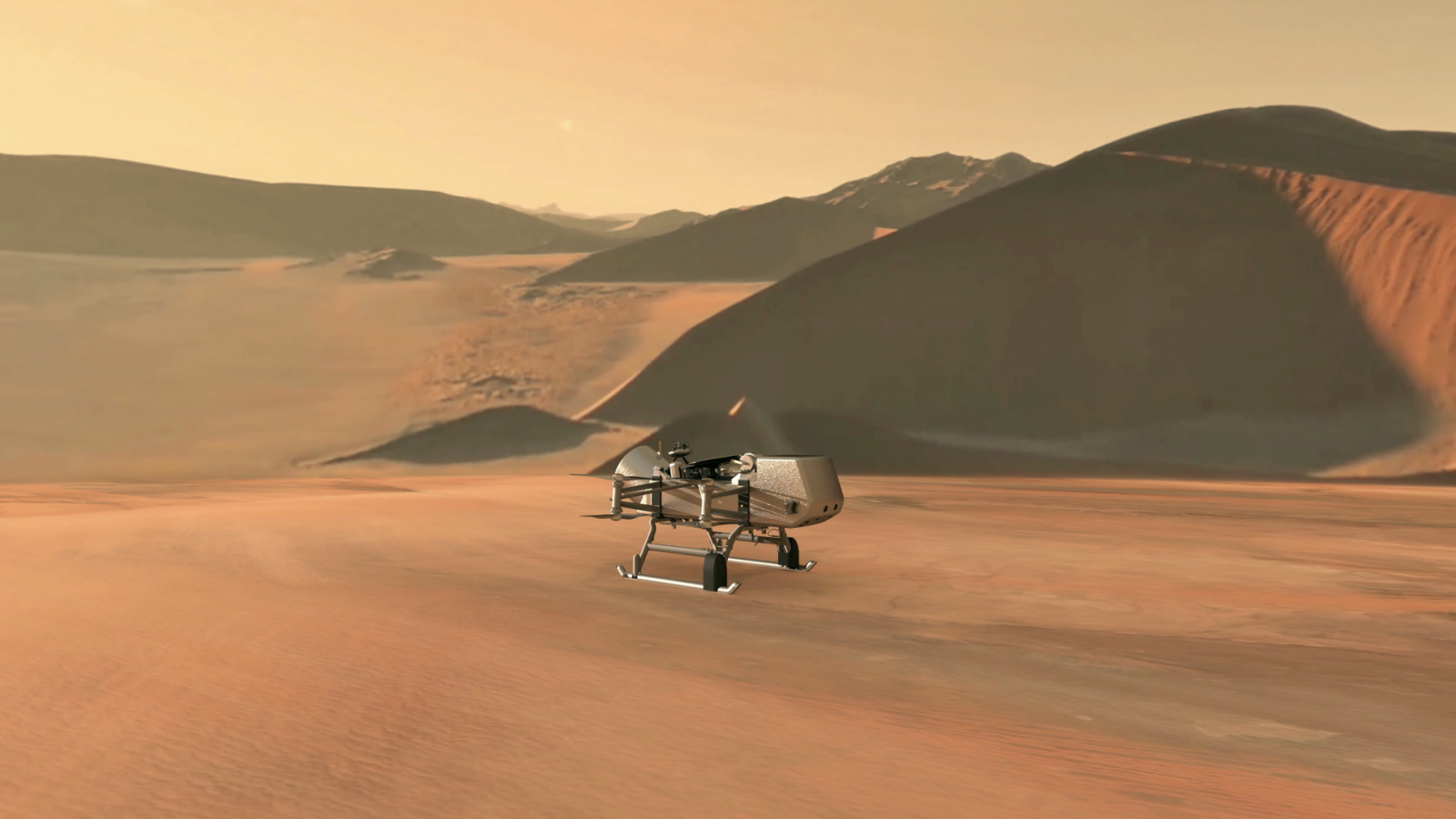 The Dragonfly aircraft would fly above the frozen Titan surface in search of the building blocks of life. Image Credit: NASA JPL-Caltech

NASA announced plans to send a flying rotorcraft to Saturn’s moon Titan to study its surface and atmosphere for signs of past and possibly present forms of microbial life.

Named Dragonfly, the spacecraft, which is set to launch in 2026 and reach its target in 2034, will function like a large drone, flying to numerous sites, where its science instruments will analyze surface composition, atmospheric properties, and subsurface oceans and lakes to search for chemical evidence of life in both the present and distant past, and determine how far pre-biotic chemistry has evolved. The mission is a project of NASA’s New Frontiers program, which explores solar system locations deemed scientifically interesting.

Rich in organic compounds that make up the building blocks of life, Titan is considered by many scientists to be an analogue of early Earth. Its atmosphere is composed mostly of nitrogen, much like Earth’s is, and contains clouds from which methane rain falls. Weather on Titan has shaped surface properties, creating sand dunes composed of organic materials. Some organics are produced in clouds and fall to the surface as snow.

Titan has three conditions that make it potentially habitable for microbial life. These are the complex organic compounds formed by weather and surface processes, water, and energy, all of which make the moon a perfect laboratory to provide scientists with important insights as to how life began on Earth.

Titan is considered to be a model as to what Earth might have been like in the distant past. Image Credit: NASA via Vudosar

During its 2.7-year-mission, Dragonfly will visit the most promising sites on Titan in terms of habitability, using the moon’s thick atmosphere to fly from one site to another. Composed of eight rotors, the spacecraft will be the first multi-rotor object to visit and study another world.

“Titan is unlike any other place in the solar system, and Dragonfly is like no other mission. It’s remarkable to think of this rotorcraft flying miles and miles across the organic sand dunes of Saturn’s largest moon, exploring the processes that shape this extraordinary environment. Dragonfly will visit a world filled with a wide variety of organic compounds, which are the building blocks of life and could teach us about the origin of life itself,” emphasized Thomas Zurbuchen, NASA associate administrator for science, based in Washington, DC.

Mission scientists used data collected by NASA’s Cassini orbiter, which studied Saturn and its moons for 13 years, to select a landing site that is safe, identify scientifically significant surface areas to study, and even choose a landing time most likely to have calm weather. Dragonfly will touch down in a region near Titan’s equator that hosts dune fields similar to those found on Earth in Namibia in southern Africa. Initial visits to various locations in this area, nicknamed “Shangri-La,” will be brief but will gradually increase in length. Eventually, Dragonfly flights will be lengthened to approximately five miles (eight km).

The probe will collect samples from a variety of geographic terrains, including the floors of impact craters that once harbored both water and complex organics, liquid reservoirs, and subsurface oceans. Current plans call for it to fly over 108 miles (175 km) around Titan during the mission’s duration.

Its final destination will be the Selk impact crater, which evidence indicates was once filled with water and complex organic compounds, including, hydrogen, oxygen, carbon, and nitrogen.

Approximately 886 million miles (1.4 billion km) from the Sun, Titan has an average temperature of -290 degrees Fahrenheit (-179 degrees Celsius) and a surface pressure 50 percent greater than that on Earth.

“With the Dragonfly mission, NASA will once again do what no one else can do. Visiting this mysterious ocean world could revolutionize what we know about life in the universe,” said NASA Administrator Jim Bridenstine. “This cutting edge mission would have been unthinkable even just a few years ago, but we’re now ready for Dragonfly‘s amazing flight.

A growing number of solar system worlds show evidence of having subsurface oceans that could harbor microbial life. In addition to Titan, these include Ceres; Jupiter’s moons Europa, Ganymede, and Callisto; Saturn’s moon Enceladus; Neptune’s moon Triton, and Pluto.