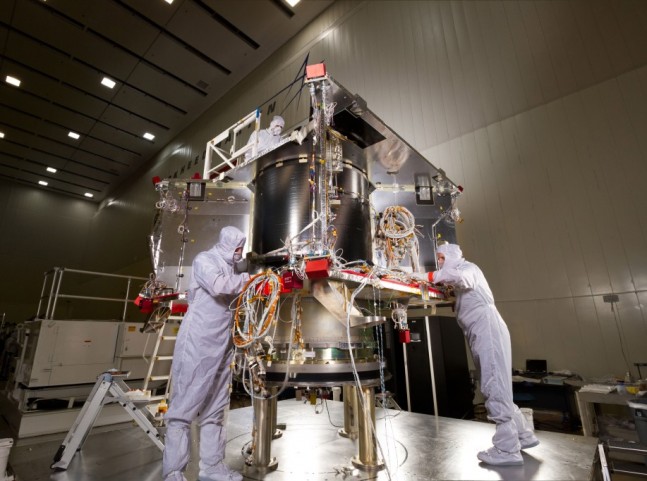 NASA’s Origins, Spectral Interpretation, Resource Identification, Security, Regolith Explorer (OSIRIS-REx ) is fast-approaching the day when it will take to the skies and travel to the asteroid Bennu. The space probe’s manufacturer, Lockheed Martin, issued a release noting that the spacecraft’s final components were being assembled in a clean room at the aerospace firm’s facilities located near Denver, Colorado. With these components coming together to form the final product – the next phase of the journey is right around the corner.

NASA is currently planning to launch OSIRIX-Rex in September of 2016 atop a United Launch Alliance Atlas V 411 rocket. If everything goes according to plan, this will be the first U.S. mission to collect and return samples from an asteroid. At present, OSIRIS-REx is in what is known as the “ATLO” phase (which stands for assembly, test and launch operations) – the point in the processing flow when the spacecraft comes together – in preparation for its steps into deep space.

Also during ATLO, OSIRIS-REx will have its scientific instruments delivered from the various organizations and institutions that are collaborating on the project. These will, in turn, be integrated onto the spacecraft. Once all is said and done, OSIRIS-REx will undergo exhaustive testing so as to validate the design. These tests are currently set to begin this autumn.

In the next six months, OSIRIS-REx will have key subsystems installed which, according to Lockheed Martin, include – but are not limited to – the avionics, power, telecommunications, mechanisms, thermal systems, and also guidance, navigation and control.

“Building a spacecraft that will bring back samples from an asteroid is a unique opportunity,” said Rich Kuhns, OSIRIS-REx program manager at Lockheed Martin Space Systems. “We can feel the momentum to launch building. We’re installing the electronics in the next few weeks and shortly after we’ll power-on the spacecraft for the first time.” Bennu is known to be rich in carbon and could contain clues as to how the Solar System was formed. If organic molecules can be detected, the mission might be able to provide insights into how life emerged on Earth.

“ATLO is a turning point in the progress of our mission. After almost four years of intense design efforts, we are now starting flight system assembly and integration of the science instruments,” said Dante Lauretta, principal investigator from the University of Arizona, Tucson. “In just over 500 days, we will begin our seven-year journey to Bennu and back. This is an exciting time.”

Two days ago, on March 30, OSIRIS-REx was given the go-ahead to move toward the next phase of this mission – Phase D. This occurred after the project had undergone a series of reviews that were held to verify that OSIRIS-REx’s managers had successfully completed all of the program’s technical, schedule, and budgetary elements.