Fear no asteroid: an interview with astronomer Judit Györgyey-Ries 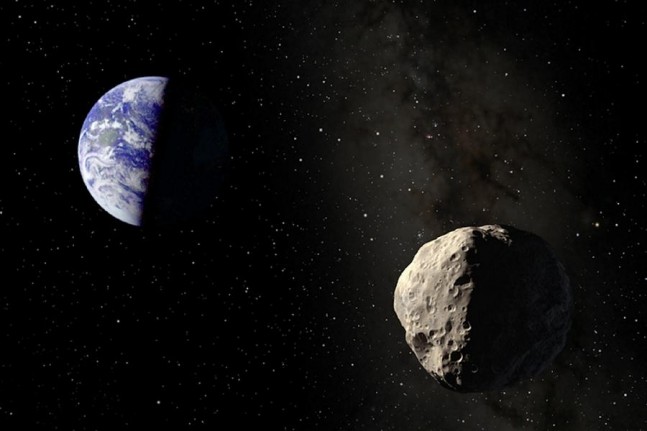 Should humanity be afraid that someday a huge asteroid would fulfill one of the apocalyptic scenarios envisaged for Earth, where a space rock smashes into our planet causing a global disaster? Judit Györgyey-Ries, an experienced astronomer at the University of Texas’ McDonald Observatory, is working to calm these fears with a scientific approach to the matter.

In an interview with SpaceFlight Insider partner astrowatch.net, she discussed potential asteroid threats, her current research and misinterpretation of her words by tabloid newspapers.

Astrowatch.net: Some of the tabloid newspapers like The Mirror got you wrong citing you that the asteroid 2012 TC4 will hit the Earth in October 2017, what exactly have they misunderstood?

Judit Györgyey-Ries: “According to the calculation of the JPL NEO [Jet Propulsion Laboratory, Near-Earth Object] office, there is zero chance that the asteroid will hit in 2017. There will be a very close encounter on Oct. 12, 2017 [Universal Time date], when the distance between the center of the Earth and the asteroid is only 0.0009624 AU, that is 8,946 miles [14,398 km]. It is close, but still a miss. According to the Minor Planet Center, the encounter is not that tight; it will be 0.0017 AU, which is 158,024 miles [254,316 km], about three quarter the way to the Moon. Also they latched onto the larger limit of the size estimate, which would of course make the consequences of an impact more severe.” Astrowatch.net: So there’s really a very slim chance of this asteroid hitting the Earth, is it?

Györgyey-Ries: “Yes, but the possible collisions are between 2020 and 2026. Whether it happens at all or when will it happen depends on the exact circumstances of the flyby in 2017.”

Astrowatch.net: Is there any other potential impactor that we should be aware of in the coming years?

Györgyey-Ries: “There are some you can worry about, but the probabilities are very low. You can check all the known possible impactors on the NEO JPL website.

“It is not easy to interpret the numbers, but if you choose an object and click on the cumulative impact probability, it will tell you how to interpret it as a percent: 1 in XXXX or, even more enlightening, it gives you the ‘will not hit’ probability.

“All the risks are quite small except for 2010 RF12, but it is estimated to be about 23 ft. [7 m], so it will disintegrate in the upper atmosphere without bothering anybody.

“However, the orbit of smaller asteroids are more strongly influenced by non-gravitational effects, so we cannot just say we got them all, some of them needs monitoring. These are the Virtual Impactors and PHAs, or Potentially Hazardous Asteroids. There is no such thing as a perfect observation, or a perfect model, so there are always uncertainties in the orbital solution.

“Virtual Impactors are named so, because their data allows for orbits that put it on collision course with the Earth. For most PHAs, there is no such orbit at the present, but as their orbit evolves, they could eventually collide with Earth. Interesting to note that not all Virtual Impactors are considered Potentially Hazardous, as it has to have a certain size to cause damage.

“Earth is being bombarded every day by dust or sand size particles. But we have an atmosphere, which protects us. Objects up to about 82 ft. [25 m] in size burn up, and even the 164 to 262 ft. [50 to 80 m] objects disintegrate before reaching Earth, although they can create a damaging airburst.”

Györgyey-Ries: “Knowing what might come is the first line of defense, and I am getting the positions of objects, which might be previously unknown asteroids. McDonald Observatory started a NEO confirmation program in 1995 using the 30 inch [0.76 m] telescope, when the surveys concentrated on the large, bright objects. I joined them around 1997. Eventually, the other team members left.

“Since 2012, I am using the 83 inch [2.1 m] telescope to be able to keep up [with] the fainter, newer discoveries. I am just one of the astronomers who regularly observe these newly discovered objects, and our observations are combined by the Minor Planet Center to refine the orbits. “I am not searching for new asteroids. What I am doing is observing the objects the Minor Planet Center (MPC) could not connect to any known asteroids. Those get posted on the MPC website, where I get the approximate ephemerides.

“It is important to observe them as soon as possible after posting, because those positions are based on an approximate orbit, which might have little to do with the actual orbit. The longer you wait with the next observation, the larger the uncertainty, so you can lose it. But if I or somebody else gets an observation, they immediately send it back to the MPC and they include those new observations to update the orbit.

“Most of the time the new objects are main belt asteroids, some are NEOs, and some are ‘rediscoveries’ of asteroids, which were assigned provisional designations, but have not been observed for a while, so the ‘official’ orbit was far off from the real one. With just a couple of observations, they could not connect the orbits, but as more and more observations come in, the program can detect that the two orbits are similar, and if the combined solution gives a better orbit than the two individual ones, you can be sure that it is the same body.”

Astrowatch.net: On what research do you currently focus on?

Györgyey-Ries: “I am pretty much alone doing the NEO observations at McDonald Observatory. When I have time, I am observing asteroids to get light curves and calculate rotation periods. If I have a good enough light curve, I can estimate rough shapes.”

Astrowatch.net: What do you think about NASA’s Asteroid Redirect Mission as the planetary defense project?

Györgyey-Ries: “I am not familiar with all the details, but I feel we need to study possible methods to modify asteroid orbits.”

Astrowatch.net: What is the most effective way of protecting our planet from asteroid threats; do you know any proposed projects, concepts?

Györgyey-Ries: “There is not one perfect solution. What we need to do will depend on when we spot the threat, how much time we have left, [and] how big is the asteroid. If we discover one on collision course early enough, we can probably tug it gently – that is using the gravitational attraction between the asteroid and a spacecraft to change the orbit. This is the gravitational tractor; I like this because it does not disrupt the asteroid.

“Other methods are the kinetic impactors, when you hit the asteroids with one or more sufficiently massive bodies to push it off its original course. You can also use stand off nuclear detonation, or when all else fails – blow it up. As the debris spread, some of it will still hit the Earth, but some misses, so you reduce the damage. That is why we do the survey now, to give ourselves enough time to figure out how is best to proceed.”