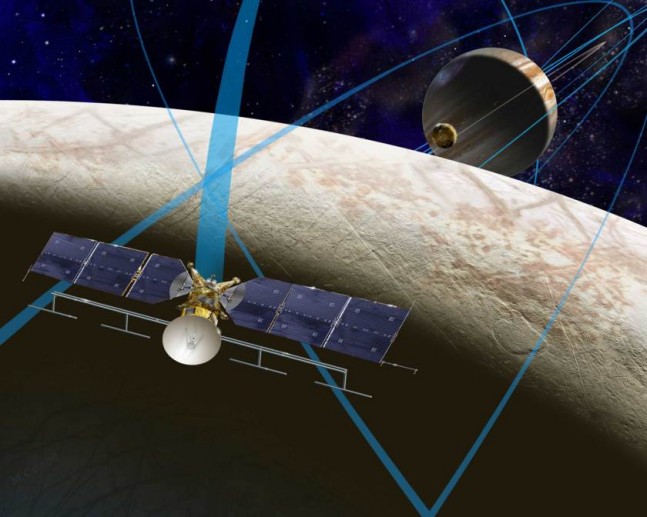 A solar-powered spacecraft could fly by Europa many times to achieve similar science return from an orbital mission, but avoid prolonged exposure to the harshest radiation environment around the moon. Image Credit: NASA/JPL-Caltech

NASA’s chief financial officer David Radzanowski had requested $30 million over the next year to start work on a mission to the Jovian (one of four closest satellites of the gas giant Jupiter) moon Europa. His request was granted in the latest White House Space and Sciences budget. The proposed budget covers everything from the Commercial Crew Program ($1.2 billion) to the Asteroid Redirect Mission. It also contains the funding Radzanowski sought for the project.

A concept for more than 15 years, the Europa Clipper is designed to make 47 flybys of the icy moon. The altitudes of the encounters will range from a high of 1675 miles (2700 km) to a “low” of just 15 miles (25 km). As proposed, the Europa Clipper may launch sometime in the mid 2020s. The goal of this new mission is to determine if the ingredients for biological life reside beneath the moon’s icy surface – something that scientists who have examined the world suspect might just be possible. This makes Europa potentially one of the best places besides Earth to find life within our solar system.

The Europa Clipper is designed to carry a large assortment of instruments in its school-bus sized frame. It also has to stand up against the intense radiation belts of the Jovian system. Mission planners believe they can overcome these obstacles and create a probe capable of surviving the extreme environment. Europa may be the best place in the solar system to look for environments where life could exist. Image Credit: NASA/JPL-Caltech/Ted Stryk

Scientists think Europa contains a liquid ocean below the ice – one that is possibly capable of supporting life. Recent studies have concluded that Europa, the sixth largest moon in the solar system, may harbor more than three times the total volume of water here on planet Earth. Europa also appears to be affected by processes similar to plate tectonics as evidenced by geysers on the moon’s surface. If these assumptions are proven correct, the possibilities for life (even microbial life) on the Jovian moon increase dramatically.

Before the Europa Clipper can be launched on its incredible journey, the proposed budget for funding must first travel the gauntlet of Congressional committees, budget rewrites and re-allocations. Still, the Europa Clipper has its fans. Rep. John Culberson, chairman of the House Appropriations Subcommittee that funds NASA, is a big fan of a Europa mission and will be pleased with this part of the budget proposal. Ted Cruz, now chairman of the Senate subcommittee that oversees NASA, is also a supporter. But there are many Congressional Democrats and Republicans who may resist this proposal.

In total, the Europa Clipper mission can expect $255 million to be allocated to the project over the next 5 years. That is of course dependent on the funding surviving the budget process.

I strongly support this mission, but in my opinion US$30 million is a ridiculously tiny amount, considering the importance of this mission.

I strongly support this mission as well (or anything similar to it). As for the $30 million currently proposed for this coming FY, you have to remember that this project is only in the study phase and a modest sum like this amount is typical for this earliest stage of this class of planetary mission. The real test will come in subsequent FYs to see if Congress actually approves $255 million required over the next five years to develop it as well as the additional hundreds of millions in the following years to build and launch the hardware needed for this mission.

In 2009 I was involved in a study of Satellite images taken of the Moon Europa, specifically the stress cracks. Using advance Electron imaging process to enhance and enlarge the images we came to find what we believed to be consistent with Red Algae growing. The cracks in the surface ice were also consistent with slush and not yet frozen over. Europa is far from home and any trip should include a probe to penetrate the ice to look for biology. Using a surface tether connected to the probe to transmit images and data back to the Satellite that can be forwarded to Earth makes the most sense. With liquid oceans there would be a very high probability of life, if were going to Europa let’s make it a real attempt to find life and verify it.

Fingers crossed that this latest proposed mission to Europa actually survives the selection process *AND* Congress funds it. This mission should provide vital data on the putative geysers on Europa. If these geysers do exist, it should prove possible to return samples of its particles to Earth using technology originally developed for NASA’s Stardust mission for detailed laboratory analysis as part a follow-up mission. Such a sample return mission would be MUCH less expensive and could be performed MUCH sooner than a mission designed to land on Europa.

A similar mission concept is currently under serious study to return samples from the much more active polar plumes of Enceladus.

Im a BIG fan of JPL and the science they ACTUALLY do, instead of all this touchy feely crap earth science NASA has been doing lately that’s actually the perview of NOAA! But, I digress! What we NEED to do is stop the public works programs at ATK/former Thiokol, Lockheed Martin/former Rockwell-shuttle workers, and Boeing and make them perform by contract/under budget or fined double costs! Lets let ULA or SpaceX lead the way on this, for some reason, im betting it gets done just as well, and cheaper or at least on budget! Greed will bind us to this planet or cost us more than we can afford in national treasure!

My electron photographic imaging and Spectral processing work of the Moon Europa give a 96.5% chance life flourishes under it’s icy crust. Thermal vents create heat from the moon’s core caused by rotational forces producing liquid oceans 50 miles deep. Of greatest important is the same material that created life on earth is found within the ice particles giving us the high probability of life forms. Given the diverse biology and chemical make up of earth’s oceans it is appropriate to assume the same or similar biology exists on Europa.