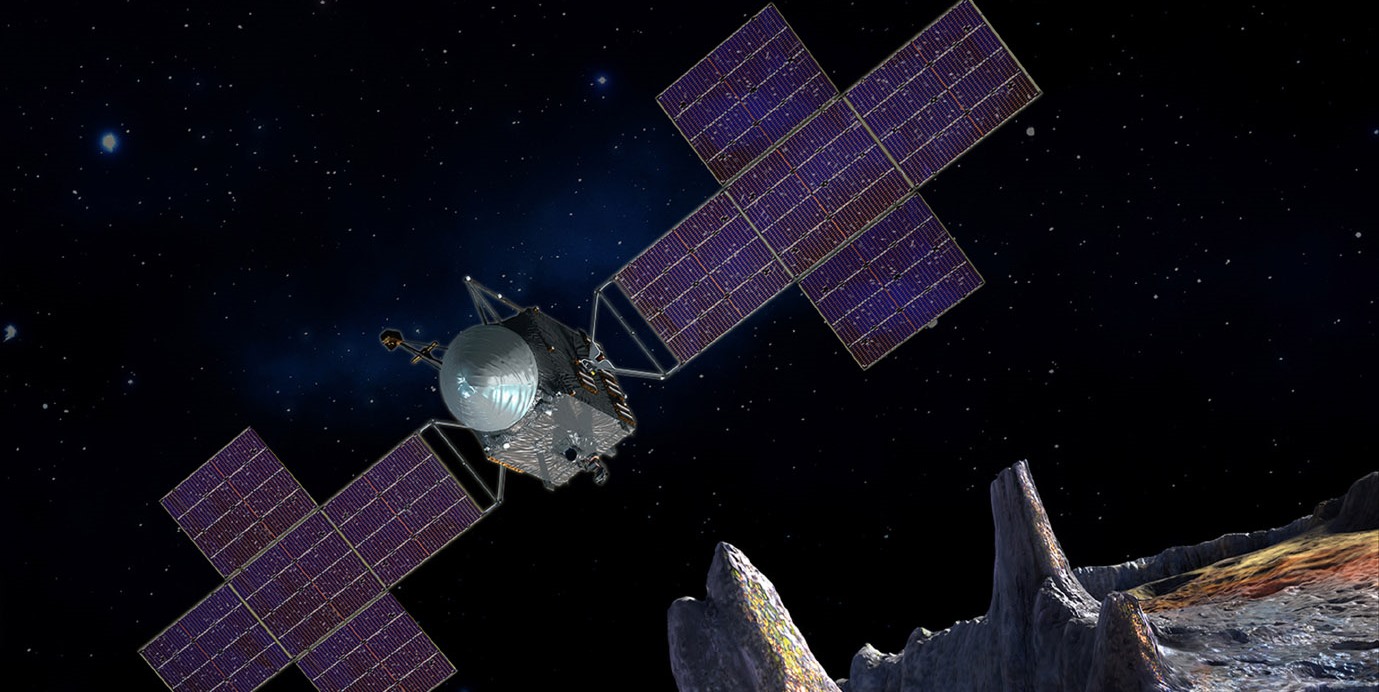 This artist’s-concept illustration depicts the spacecraft of NASA’s Psyche mission near the mission’s target, the metal asteroid Psyche. The artwork was created in May 2017 to show the five-panel solar arrays planned for the spacecraft. Image Credit: SSL/ASU/P. Rubin/NASA/JPL-Caltech

NASA’s Psyche mission to a unique metal asteroid has attained the important milestone of being approved to begin spacecraft design and construction.

Known as “Phase C,” this stage involves finalizing the probe’s design, developing detailed plans for it, and eventually, building and testing the spacecraft and its instruments.

Scheduled for an August 2022 launch, the mission shares its name with its target, an asteroid in the belt between Mars and Jupiter composed largely of iron and nickel instead of rock. Its composition is similar to that of Earth’s core and could be the leftover core of an ancient planet or protoplanet, possibly one as big as Mars, that was destroyed in an impact that removed its rocky outer layers. Such impacts were common in the solar system’s early years. 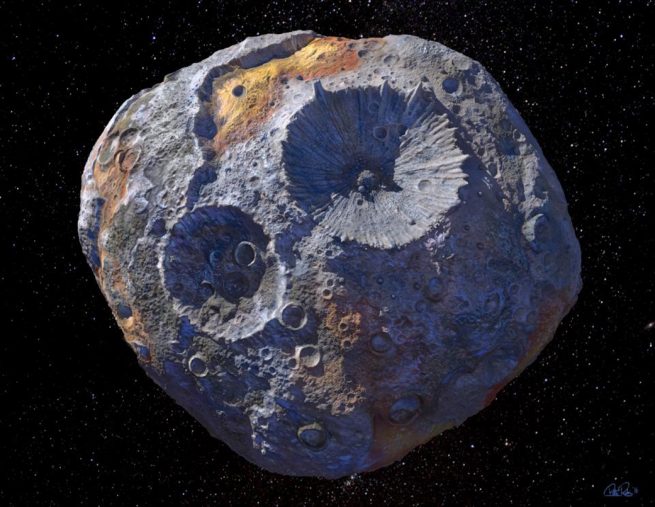 Studying Psyche could provide scientists with new insight into the state of the early solar system and the planet formation process. Mission scientists want to know how old the asteroid is as well as deduce the speed rate of impacts in the early solar system. They hope to learn whether Psyche once was the core of an ancient planet that was subsequently destroyed and determine whether it formed in a process similar to the one that formed Earth’s core.

“The Psyche team is not only elated that we have the go-ahead for Phase C; more importantly, we are ready. With the transition into this new mission phase, we are one big step closer to uncovering the secrets of Psyche, a giant mysterious metallic asteroid, and that means the world to us,” emphasized mission principal investigator Lindy Elkins-Tanton of Arizona State University (ASU), Tempe.

The probe, which is a project of NASA’s Discovery Program of low-cost robotic solar system missions, will be equipped with three science instruments–a magnetometer to find out if Psyche has any remaining magnetic field; a multi-spectral imager, which will capture high-resolution images while using filters to distinguish metals and silicates, and a gamma ray and neutron spectrometer, which will map the asteroid’s elements.

A new laser communication technology, known as Deep Space Optical Communications (DSOC), will be tested on board the spacecraft.

Studying the cores of terrestrial planets is difficult because they sit so far below their mantles and crusts. Since Psyche appears to be the exposed remnant of a planetary core, studying it will give researchers new insight into the violence of the early solar system as well as the accretion process through which planets formed.

Mission objectives include determining whether Psyche is a former planetary core or an object that never melted, learning the ages of the various regions on its surface, finding out if small metallic asteroids have the same light elements believed to be in Earth’s high-pressure core,  determining whether Psyche and Earth’s core formed under similar conditions, and characterizing Psyche’s topography.

Three more mission phases remain after Phase C. Phase D, which involves completing the spacecraft’s construction and testing, is scheduled for 2021. Phase E, deep space operations and data collection, will start following launch. Finally, Phase F will occur when science operations at Psyche are complete and data collected is sent back to Earth.

Following a three-and-a-half-year solar electric cruise, including a 2023 Mars gravity assist, the spacecraft will arrive at its target in January 2026, then spend 21 months in orbit studying and mapping it.

One of the 10 most massive objects in the asteroid belt between Mars and Jupiter, Psyche has a diameter of approximately 140 miles (226 km). Discovered in 1852, it has a surface that is approximately 90 percent metallic. It orbits between 2.5 and 3.3 Astronomical Units (AU, with one AU equal to the average Earth-Sun distance, or 93 million miles (150 million km) from the Sun and takes about five years to orbit our parent star.