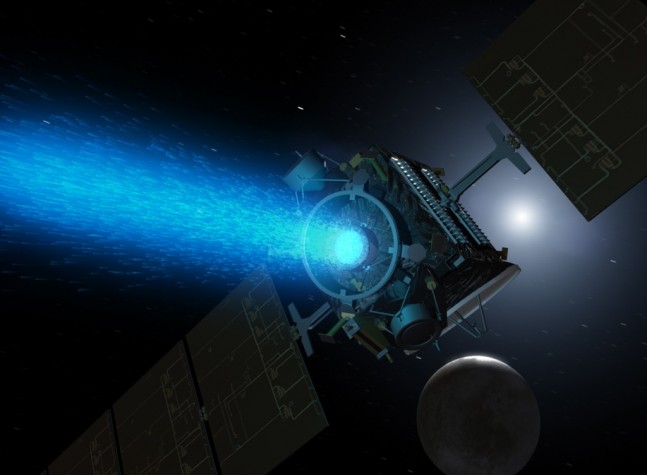 Artist's concept of Dawn above Ceres around the time it was captured into orbit by the dwarf planet in early March. Image Credit: NASA / JPL

NASA announced on Monday, April 6, that the Dawn spacecraft has performed flawlessly in the month since its capture by the gravity of the dwarf planet Ceres. Ceres’ gravity, in combination with the thrust from Dawn‘s ion engine, is guiding the spacecraft into a circular orbit around the tiny world. All of the spacecraft’s systems and scientific instruments are in excellent shape.

Since early March, Dawn has been following its planned trajectory on the side of Ceres facing away from the Sun. After the spacecraft entered orbit around Ceres, its momentum carried it into a higher altitude, reaching a maximum of 46,000 miles (74,030 km) on March 18. On Monday, Dawn was about 26,000 miles (41,843 km) above Ceres as it descended towards its first planned science orbit, which will be approximately 8,400 miles (13,518 km) above the surface. This image of Ceres was taken by NASA’s Dawn spacecraft on March 1, 2015. Image Credit: NASA/JPL-Caltech/UCLA/MPS/DLR/IDA

Dawn‘s next optical navigation photographs of Ceres will be taken on April 10 through April 14. The images are expected to be available online after Dawn‘s science team completes their initial analysis. In the 10 April images, Ceres will appear as a thin crescent, much as it did in images taken on March 1, but with about 1.5 times higher resolution. The 14 April images will reveal a slightly larger crescent in more detail. Dawn will begin its intensive prime science campaign when it settles into its first science orbit on April 23.

These photos should provide an improved view of the entire surface of Ceres by early May. Two mysterious bright spots that have appeared in earlier images have captured the imaginations of both researchers and space enthusiasts alike. It is still unknown what these reflections of sunlight represent, but closer images should yield more information about their nature. These objects were of particular note to scientists who commented on them this past February.

“The brightest spot continues to be too small to resolve with our camera, but despite its size it is brighter than anything else on Ceres. This is truly unexpected and still a mystery to us,” said Andreas Nathues, lead investigator for the framing camera team at the Max Planck Institute for Solar System Research, Gottingen, Germany. Dawn is scheduled to complete its first Ceres science phase on May 9 and begin a spiral descent to a lower orbit to observe the dwarf planet from a closer perspective.

“Since its discovery in 1801, Ceres was known as a planet, then an asteroid and later a dwarf planet,” said Marc Rayman, Dawn chief engineer and mission director at JPL. “Now, after a journey of 3.1 billion miles (4.9 billion kilometers) and 7.5 years, Dawn calls Ceres, home.”

Dawn’s scientific instrument payload consists of two cameras, a visible and infrared mapping spectrometer to reveal the surface minerals, and a gamma ray and neutron spectrometer to determine the elements that make up the outer parts of the asteroids. Scientists will use the data from these systems to study surface features and the complex and varied landscapes of the Dawn mission’s two target worlds.

The Dawn spacecraft launched from Launch Complex 17B at Cape Canaveral Air Force Station in Florida on Sept. 27, 2007. The spacecraft, equipped with an ion engine, arrived at its first target, the asteroid Vesta on July 16, 2011. Dawn explored Vesta for 14 months, capturing detailed images and data about the asteroid. The spacecraft departed for Ceres, the mission’s second target, on September 5, 2012. Dawn began orbiting Ceres on March 6, 2015. The probe is the first spacecraft to orbit a body in the main asteroid belt as well as the first spacecraft to orbit two targets.

I think the bright spots could possibly be ice or maybe even a metal such as nickel deposited by the object that caused the crater.

You have such an exciting imagination…

I want to know what that bright spot is…ice??

It’s ice from the impact that caused the crater. It pierced the crust of the dwarf planet just like skin. It shows an entrance hole and an exit. liquid is under the crust and so it bleeds. Planets get pierced by impacts. This is the theory I have shared with nasa over the last year and there is a lot of evidence for it.

Well if that’s been your theory for a year I suppose it’s too late to change it now, but the light protrudes above the crater as it can still be seen right up until the moment it completely rotates off camera, so I’m thinking all things alien, alien solar array, alien settlement, crashed alien spaceship, the glow from a massive diamond on top of an alien pyramid, I like to hedge my bets, but even if I’m wrong at least I gave my imagination something more interesting to stew on than a roadway hazzard

Andrew: what’s the evidence for liquid under the surface? And, liquid what? Water? Seems unlikely given the object’s small size and solar distance.

Lastly, if it’s ice that froze from liquid released by an impact, wouldn’t it be likely we would see more than one bright spot given how many craters there are?

It’s salt left over after the water from subterranean brine shblimated into space. Brine came to the surface when the impact crater formed. Liquid water and ice cannot last on the surface of Ceres very long and that crater is not fresh.