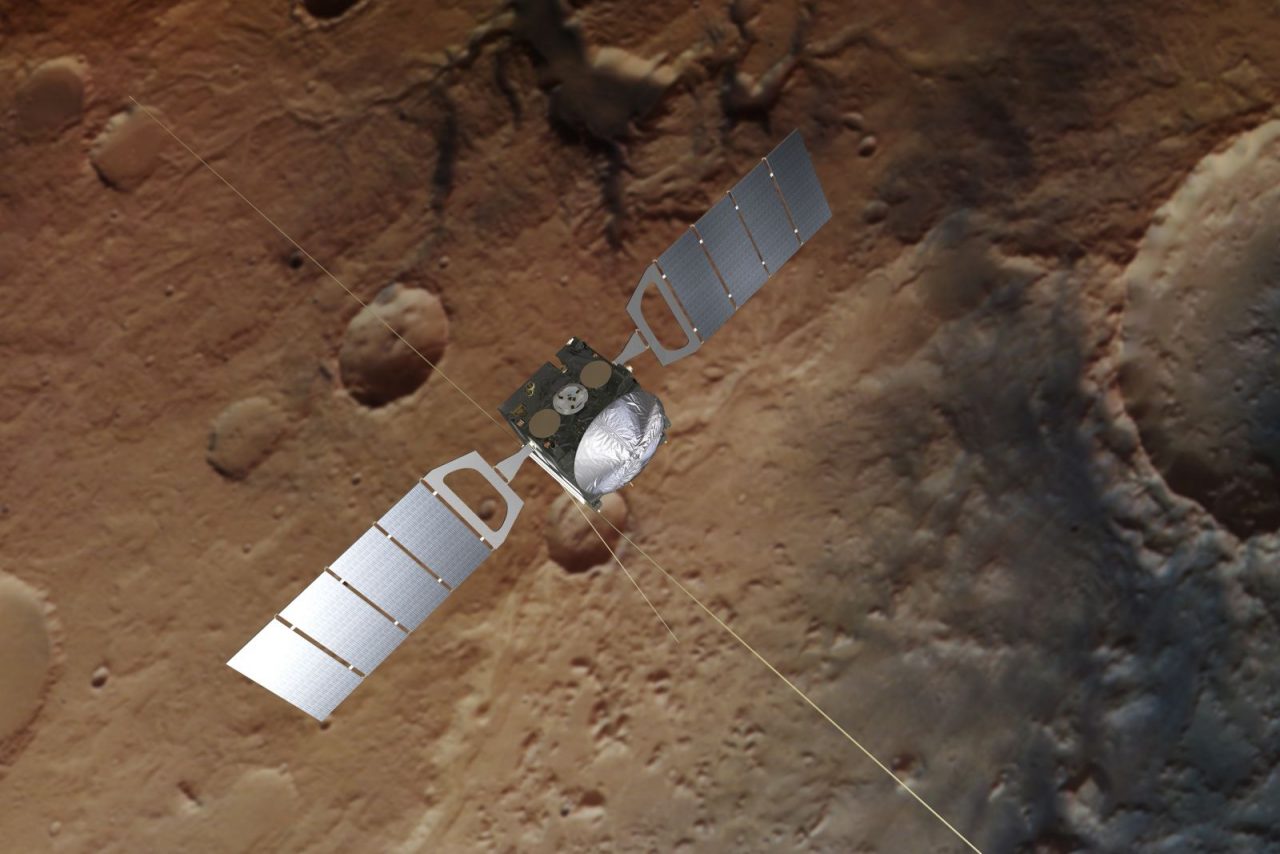 A methane spike detected by NASA’s Curiosity Mars rover in 2013 has been confirmed by researchers reanalyzing data captured by the European Space Agency’s (ESA) Mars Express orbiter during Curiosity’s first 20 months on the Martian surface.

This is the first time that a methane detection on the Red Planet’s surface has been confirmed from orbit. The research team’s findings were published in the journal Nature Geoscience on April 1, 2019.

The possible occurrence of methane in the Martian atmosphere is of interest to planetary scientists because on Earth methane is generated by both biological and geological processes. Because methane is quickly broken down by atmospheric processes, any methane detected in the Martian atmosphere must have been recently released, even if it was originally generated millions or billions of years ago and contained in underground reservoirs until now. 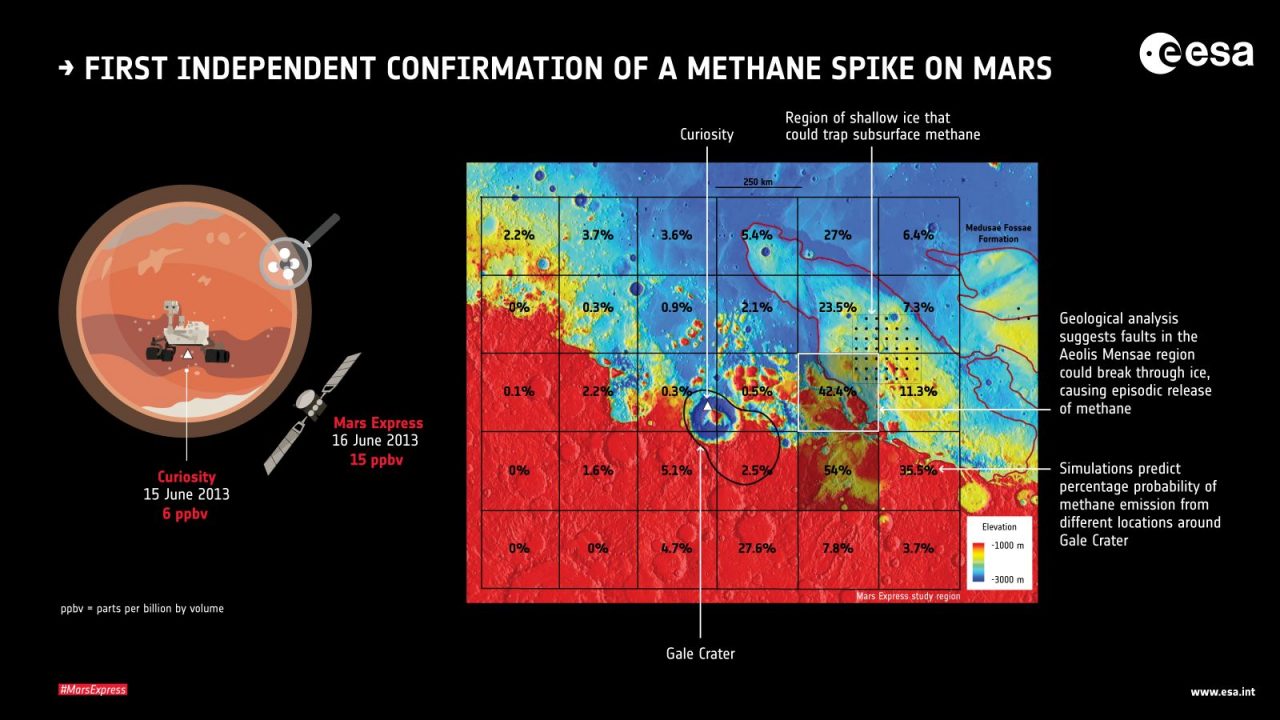 Curiosity detected a strong signal of methane on June 15, 2013. The new analysis shows the Planetary Fourier Spectrometer (PFS) instrument onboard Mars Express picked up the signal the following day as the orbiter passed over Gale Crater. The recently published study took advantage of a new observation technique which allowed collection of several hundred measurements in one area over a short time period.

“In general we did not detect any methane, aside from one definite detection of about 15 parts per billion by volume of methane in the atmosphere, which turned out to be a day after Curiosity reported a spike of about six parts per billion,” said Marco Giuranna from the National Institute for Astrophysics – Institute for Space Astrophysics and Planetology in Rome, Italy, the principal investigator for the PFS instrument, and lead author of the Nature Geoscience paper.

“Although parts per billion in general means a relatively small amount, it is quite remarkable for Mars – our measurement corresponds to an average of about 46 tonnes of methane that was present in the area of 49,000 square kilometers (about 18,919 miles) observed from our orbit,” Giuranna said.

When Curiosity detected the spike in 2013, scientists speculated that the methane originated within Gale Crater and northward of the rover because the prevailing winds were southward. New studies of atmospheric circulation on Mars, as well as local geology indicated that this is probably not the case.

“Our new Mars Express data, taken one day after Curiosity’s recording, change the interpretation of where the methane originated from, especially when considering global atmospheric circulation patterns together with the local geology,” Giuranna said. “Based on geological evidence and the amount of methane that we measured, we think that the source is unlikely to be located within the crater.”

The research team will continue to re-analyze previously collected Mars Express data while continuing ongoing atmospheric monitoring and coordinating some observations with the ExoMars Trace Gas Orbiter (TGO), which began its science observations in April 2018.

“Mars Express was the first to report a significant detection of methane from orbit around Mars, and now, 15 years later, we can announce the first simultaneous and co-located detection of methane with a rover on the surface,” says Dmitri Titov, ESA’s Mars Express project scientist. “With the spacecraft and its payload still operative, Mars Express is one of the most successful space missions to be sent to Earth’s planetary neighbor. We expect more exciting science from joint efforts by both ESA orbiters at Mars.”

This series of images shows the Martian moon Phobos as it crossed in front of the Sun, as seen by NASA’s Curiosity Mars rover on Tuesday, March 26, 2019 (Sol 2359). Photo Credit: NASA/JPL-Caltech/MSSS.

In the past few weeks, Curiosity has used its MastCam to capture images of solar eclipses caused by Mars’ two moons Phobos and Deimos. Mastcam is equipped with solar filters which allow it stare directly at the Sun.

Curiosity imaged Phobos, the larger of the two moons, on March 26, 2019. Because Phobos, which is 16 miles (26 kilometers) at its widest point, doesn’t completely cover the Sun this is considered by scientist to be an annular eclipse. The rover photographed Deimos, which is only 10 miles across at its widest, on March 17, 2019. Deimos is so small compared to the disk of the Sun in the Martian sky that its passing in front of the Sun is considered a transit.

This series of images shows the Martian moon Deimos as it crossed in front of the Sun, as seen by NASA’s Curiosity Mars rover on Sunday, March 17, 2019 (the 2,350th Martian day, or sol, of the mission). Photo Credit: NASA/JPL-Caltech/MSSS

The first solar eclipse observations from the Martian surface were by the twin Mars Exploration Rovers Spirit and Opportunity in 2004. At that time there was a much higher degree of uncertainty about the orbit of each moon. The first time one of the rovers attempted to capture Deimos transiting the Sun, the moon was 25 miles (40 kilometers away from where it was expected to be.

“More observations over time help pin down the details of each orbit,” said Mark Lemmon of Texas A&M University, College Station, a co-investigator with Curiosity’s Mastcam. “Those orbits change all the time in response to the gravitational pull of Mars, Jupiter or even each Martian moon pulling on the other.”

In addition to the eclipse images taken by MastCam, one of Curiosity’s two Navigation Cameras (NavCams) observed the shadow of Phobos momentarily darkening the sky at sunset as the moon passed over the rover on March 25, 2019.

“Eclipses, sunrises and sunsets and weather phenomena all make Mars real to people, as a world both like and unlike what they see outside, not just a subject in a book,” Lemmon said.

There have been eight observations of Deimos transiting the Sun by either Spirit, Opportunity or Curiosity. Phobos eclipses have been captured 40 times. With each new eclipse observation from the Red Planet, the uncertainty of the orbits of its two moons decreases.

This series of images shows the shadow of Phobos as it sweeps over NASA’s Curiosity Mars rover and darkens the sunlight on Monday, March 25, 2019 (Sol 2358). Photo Credit: NASA/JPL-Caltech