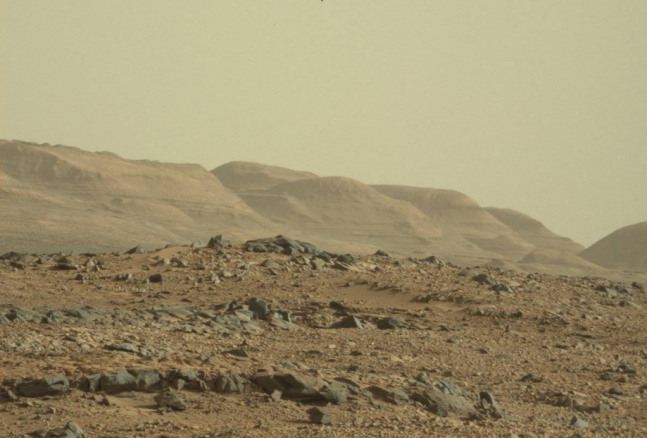 The hills beckon: the mesas and buttes in the foothills of Mount Sharp where Curiosity will soon be exploring. Photo Credit: NASA/JPL-Caltech

After a long, and at times risky two-year journey, the Mars Science Laboratory rover Curiosity has reached the base of the lower slopes of Mount Sharp, the primary destination since its landing back in 2012. Mount Sharp is about the same height as Mount Rainier on Earth and sits in the middle of the expansive Gale crater. The arrival was announced on Thursday, Sept. 11 at a NASA telecon which discussed Curiosity’s achievements so far and what else now awaits at the mountain. Map of the old proposed traverse route compared to the new one, which will takes Curiosity up the slopes of Mount Sharp. Image Credit: NASA/JPL-Caltech

“It has been a long but historic journey to this Martian mountain,” said Curiosity Project Scientist John Grotzinger of the California Institute of Technology in Pasadena. “The nature of the terrain at Pahrump Hills and just beyond it is a better place than Murray Buttes to learn about the significance of this contact. The exposures at the contact are better due to greater topographic relief.”

As Jim Green, director of NASA’s Planetary Science Division at NASA Headquarters in Washington, also noted, “Curiosity now will begin a new chapter from an already outstanding introduction to the world. After a historic and innovative landing along with its successful science discoveries, the scientific sequel is upon us.”

The arrival is actually a little earlier than previously estimated, due to a detour that the rover has taken. The original plan was to continue a bit farther west from where it is now, to an area of outcrops called Murray Buttes, before turning and starting to go up the lower slopes of the mountain. In the new traverse route now however, Curiosity will head to another outcrop called Pahrump Hills just a short distance away where it will do more drilling before taking a much shorter route up the slopes. Both Pahrump Hills and Murray Buttes lie at the edge of the boundary between the lower slopes of Mount Sharp and the crater floor.

The route will also take Curiosity past some of the very dark sand dunes around the base of Mount Sharp, another interesting target of study. As the rover continues up the lower slopes of the mountain, it will get into areas of the larger mesas and buttes which are 60 feet (18 meters) tall or more, which should provide some spectacular scenery. This region as a whole is very reminiscent of the desert southwest in the United States. The Bonanza King rock outcrop, which proved to be too unstable to complete drilling. It did, however, show an unusually high content of silicon, another potential clue to the region’s much wetter past. Image Credit: NASA/JPL-Caltech

Last month, Curiosity attempted to drill at an outcrop called Bonanza King, but the rock proved to be too unstable to continue drilling safely, as it moved too much during drilling tests. Other analysis from the Alpha Particle X-ray Spectrometer (APXS) instrument however, did show an unusually high amount of silicon in the outcrop. The rover science team now hopes to find other similar outcrops at Pahrump Hills or elsewhere, as the silicon finding could provide more evidence as to how wet this region used to be a long time ago. Other discoveries have already shown that there was a lakebed and rivers here billions of years ago.

The rover’s journey has not been without difficulties however. The outer aluminum casings on Curiosity’s wheels have taken quite a beating from sharp rocks, although the main wheel structure itself is fine. This has caused some concern of course, but the new driving route and more emphasis on stopping for science investigations may help with this issue as well. According to Jennifer Trosper, Curiosity Deputy Project Manager at NASA’s Jet Propulsion Laboratory in Pasadena, California:

“The wheels issue contributed to taking the rover farther south sooner than planned, but it is not a factor in the science-driven decision to start ascending here rather than continuing to Murray Buttes first. We have been driving hard for many months to reach the entry point to Mount Sharp.” She added, “Now that we’ve made it, we’ll be adjusting the operations style from a priority on driving to a priority on conducting the investigations needed at each layer of the mountain.”