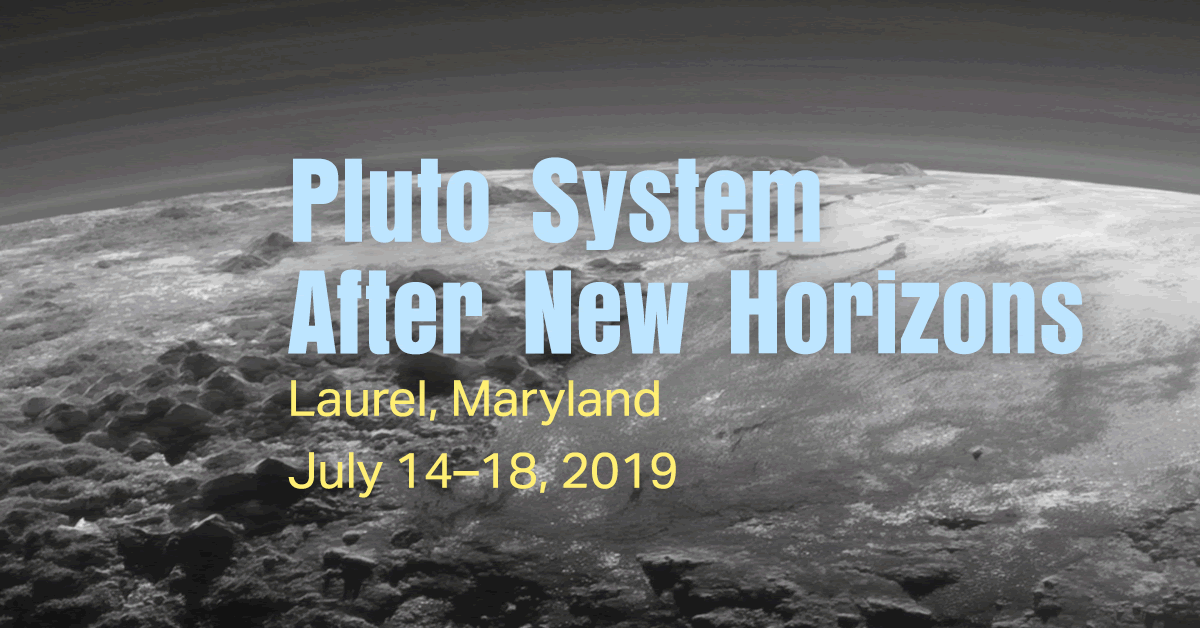 Titled “The Pluto System after New Horizons,” the conference, which featured presentations by many planetary scientists, addressed Pluto’s geology, atmosphere, orbital dynamics, and system origin as well as the nature of the double-lobed Ultima Thule (2014 MU69) and the radiation environment in the Kuiper Belt as measured by the spacecraft.

It included poster sessions on topics such as the topography of Pluto and Charon, stellar occultations by Pluto in 2017 and 2018, composition of the early solar nebula based on the findings at Ultima Thule, computer simulations based on data returned by New Horizons‘ seven science instruments, and numerous related topics.

Held at JHUAPL‘s Kossiakoff Center Kossiakoff Center, the conference also included discussions of followup observations from the ground as well as a possible return to the Pluto system with an orbiter. According to New Horizons Principal Investigator Alan Stern of the Southwest Research Institute in Boulder, Colorado (SwRI), if an orbiter is sent, it is likely to launch in the 2030s and arrive at Pluto during the 2040s.

The conference was a followup to a similar Pluto Science Conference held in July 2013, at which time planetary scientists used both data collected during ground-based observations and via computer models to anticipate what New Horizons would find during its 2015 Pluto flyby. That conference concluded with the announcement of a post-flyby conference then planned for the summer of 2017. A subsequent two-year delay enabled participants to incorporate data from the Ultima Thule flyby as well as data about the Kuiper Belt environment collected by the probe.

Noting the recent 50th anniversary of the Apollo 11 Moon landing, Kevin Schindler of the Lowell Observatory used the example of the Moon to describe the sequential stages of exploration required to learn about a celestial object. While the Moon has been observed since ancient times, Pluto is not visible to the naked eye and therefore has been studied for less than a century, he stated. 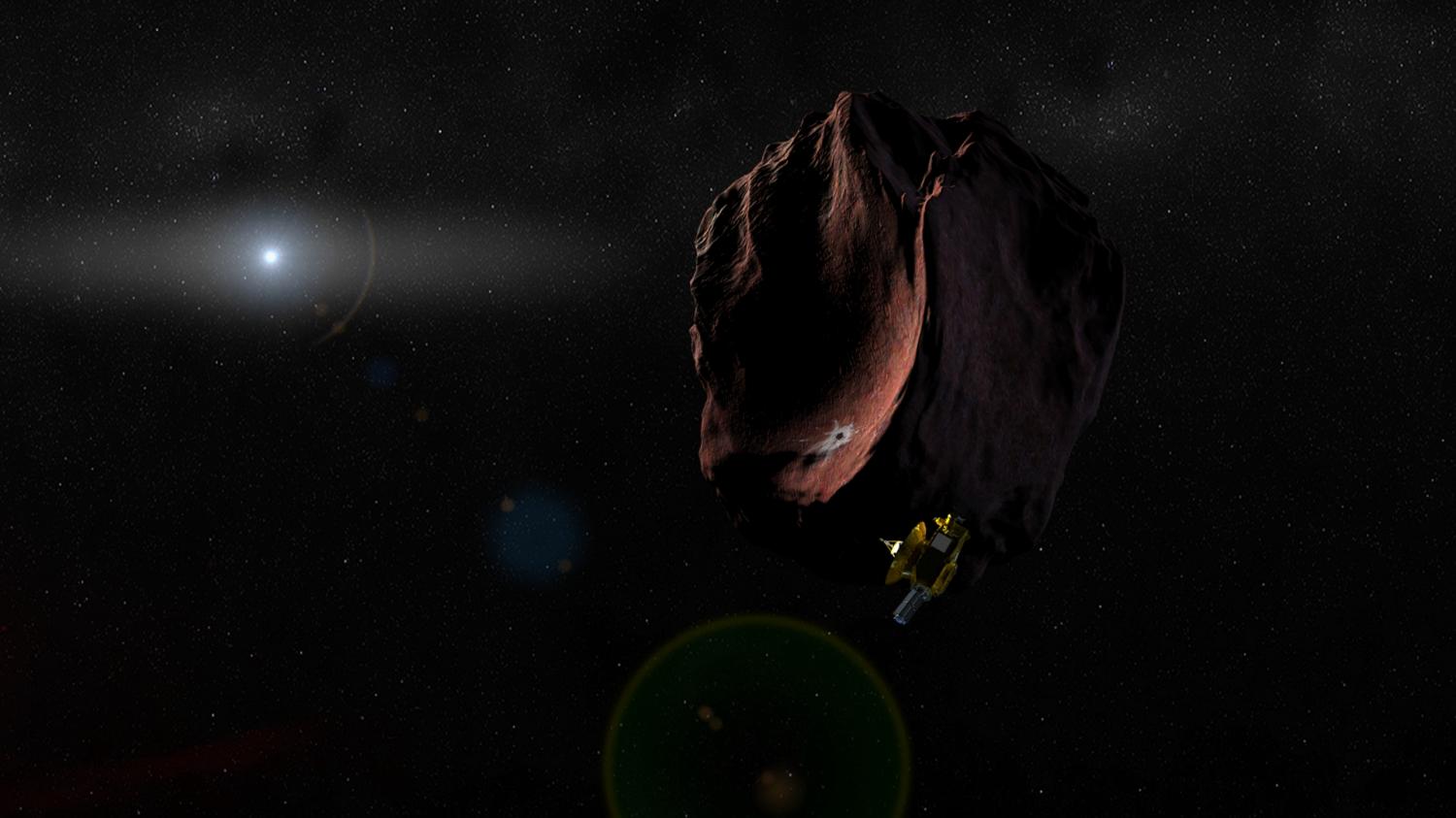 “If we are to comprehensively characterize Pluto, and by extension, any other planetary body, we must continue the quest for knowledge with continued multi-stage exploration.”

Stern pointed out that due to Pluto’s 6.38-day-long rotation, New Horizons was able to image only one of its hemispheres, the “near” or “encounter” side, in high resolution. Pluto’s far side could be imaged only in low resolution because it was photographed at a greater distance, so scientists are uncertain as to whether that side is as heterogeneous as the near side is.

Pluto’s diverse geology is most evident on the near side, which features a variety of terrains including dunes, cryovolcanoes, mountains of water ice, bladed terrain, and the young, geologically active left side of its heart feature, known as Sputnik Planitia. Its surface hosts volatile ices and complex organics known as tholins, produced by the interaction of sunlight with surface methane.

The European Southern Observatory‘s (ESO) Extremely Large Telescope (ELT), scheduled for construction during the 2020s, will be able to image Pluto at about the same resolution as New Horizons did at the far side. While ground-based observations can and will be used to monitor changes in the planet’s color and composition, ultimately, “We need to go back with an orbiter,” Stern emphasized.

At the 2013 conference, many scientists predicted Pluto would resemble Neptune’s large moon Triton, which likely orbited the Sun directly before being captured into the giant planet’s orbit. Yet ground-based observations of both worlds with the Atacama Large Millimeter/Submillimeter Array (ALMA) telescope revealed Pluto’s atmosphere may be more like that of Saturn’s moon Titan. While Pluto’s upper atmosphere contains high levels of hydrogen cyanide (HCN), Triton’s atmosphere shows only a weak HCN signal. Pluto’s atmosphere also has abundant methane while Triton’s does not.

Kirby Runyon of Johns Hopkins University‘s Department of Earth and Planetary Sciences noted that New Horizons‘ findings, along with the discovery of nearly 4,000 exoplanets over the last 20 plus years, indicate pedagogy of the solar system needs to change from memorization of a short list of planet names to a focus on a larger, more complex solar system with inner, middle, and outer zones.

Links to abstracts of all the presentations are available for reading on the conference’s Program and Abstracts website. Conference presentations and discussions will be the subject of a book, also titled The Pluto System After New Horizons, scheduled to be published in 2020 as part of the University of Arizona Space Science Series.