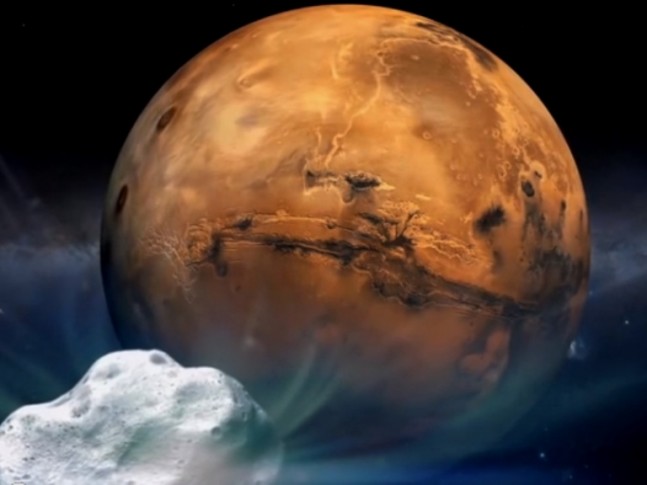 On Oct. 19, Comet Siding Spring will pass by Mars, and scientists hope to capture the first image of a comet from another planet. Image Credit: NASA/JPL-Caltech

Earlier today, NASA held a news conference in which four panelists discussed this historic encounter between Mars and Comet Siding Spring. The comet was discovered in January 2013 by Robert H. McNaught at the Siding Spring Observatory in Australia. Since its discovery, various space- and Earth-based observatories have studied the comet, and believe it to have as much mass as a mountain with a coma, that could fill one-half the distance between the Earth and the Moon. With the help of the Martian orbiters and rovers, NASA hopes to gain new information from this historic flyby. Image Credit: NASA

One of the panelists, Carey Lisse, senior astrophysicist at the Johns Hopkins University Applied Physics Laboratory (JHUAPL), said this will be the first time we are able to image an Oort Cloud comet and its nucleus. The Oort Cloud is a spherical cloud of icy objects which is believed to extend out to an area that is 50,000 times the distance from the Earth to the Sun. Since the Oort Cloud lies so far from Earth, we are not able to send spacecraft to study its objects.

Lisse explained that it is important to study the comet‘s composition because it could give us a glimpse into what elements were possibly present in our early solar system. Fellow panelist Jim Green, director of the Planetary Sciences Division at NASA Headquarters, explained that Comet Siding Spring likely formed near Jupiter when our solar system was just beginning to form and is thought to have been ejected out to the Oort Cloud. Because the comet has only returned every one to two million years to the inner portions of our solar system, it remains mostly intact from when it originally formed, giving us a view into what materials were likely around. On a journey now that likely began more than one million years ago, it was discovered that the comet will make a close approach to Mars, giving spacecraft at Mars a front seat to study the comet.

Once the comet’s trajectory was known, an assessment was done not just on its path but also on the effects of its dust to determine the risk of danger to the various orbiting spacecraft and rovers on the surface of Mars. After extensive analysis and review, it was determined that the chances of Comet Siding Spring impacting Mars were essentially zero. However, the risk from dust impacts damaging NASA’s orbiting spacecraft was significant enough that maneuvers were used to adjust their orbits so they would be protected by Mars itself while traveling through the comet’s dust trail. No significant impacts will affect Curiosity or Opportunity, the two rovers currently navigating Mars’ surface.

The Mars Reconnaissance Orbiter (MRO), Mars Odyssey, and MAVEN orbiting spacecraft will still be able to conduct observations while being kept safe from the comet’s dust and debris. Kelly Fast, program scientist at NASA’s Planetary Science Division, discussed the various roles the spacecraft will play. MRO will take the first resolved images of the comet’s nucleus to gather information about its shape, rotation, composition, and darkness in order to learn more about the materials inside the comet. Odyssey will be studying the comet’s tail in both the visible and infrared spectra to determine whether the encounter with Mars altered the comet. MAVEN, which only arrived at Mars within the past few weeks, will be surveying the upper atmosphere of Mars to see if there are any changes, such as atmospheric heating or expansion, as a result of the interaction with the comet. MAVEN will also be capturing ultraviolet information about the comet in addition to mapping the comet itself.

On the Martian surface, the Opportunity and Curiosity rovers will have their cameras turned up to the sky at the time of the encounter in order to possibly capture visible imagery. It is currently the dusty season on Mars so this may impact how bright the comet appears to the rovers if they are able to see it. If they are successful, we will have the first ever pictures of a comet from the surface of another planet. Jim Green mentioned that although the encounter will most likely only influence the upper regions of the atmosphere, Curiosity will still be collecting data from the lower atmosphere to see if there are any pressure or temperature changes.  The chemical camera, or ChemCam, instrument on Curiosity will attempt to survey the minerals from the comet as well. With the rovers’ cameras pointed to the sky, scientists are hoping to catch images of meteors resulting from debris entering the Martian atmosphere. Fast explained the odds of capturing pictures of a fireball meteor are minimal but still could happen.

The spacecraft and rovers at Mars will not be the only scientific instruments studying the comet during its rendezvous with Mars. The Hubble Space Telescope has been imaging the comet since its existence was announced, helping scientists study the dust and coma of the comet. The Chandra X-Ray observatory has been and will continue to monitor the ions coming off of the comet and will be paying close attention to how those ions interact with Mars during the passing. The comet will pass into view of the Kepler Space Telescope a few days after it flies by Mars resulting in images that will help determine if the comet was altered because of the encounter.

Amateur astronomers in the southern hemisphere will be able to view the two objects together, even with just binoculars.  Padma Yanamandra-Fisher, senior research scientist at the Space Science Institute, spoke at the NASA news conference earlier today as one of the panelists and highlighted the importance of having such a large network of amateur astronomers who could help image the rare event. The amateur astronomers will be able to image Mars and Comet Siding Spring for many nights and Yanamandra-Fisher expects there to be a large volume of images shared on the internet and via social media outlets.

With data and images already being collected about this rare encounter, be sure to visit NASA’s Mars exploration website to see the latest images and findings of the encounter between Mars and Comet Siding Spring. Be sure to stay tuned to Spaceflight Insider for news on this historic event.

Too bad we’re not quite ready to terra-form Mars yet. A small diversion of the comet could have it entering the martian atmosphere to add mass and water to the planet.